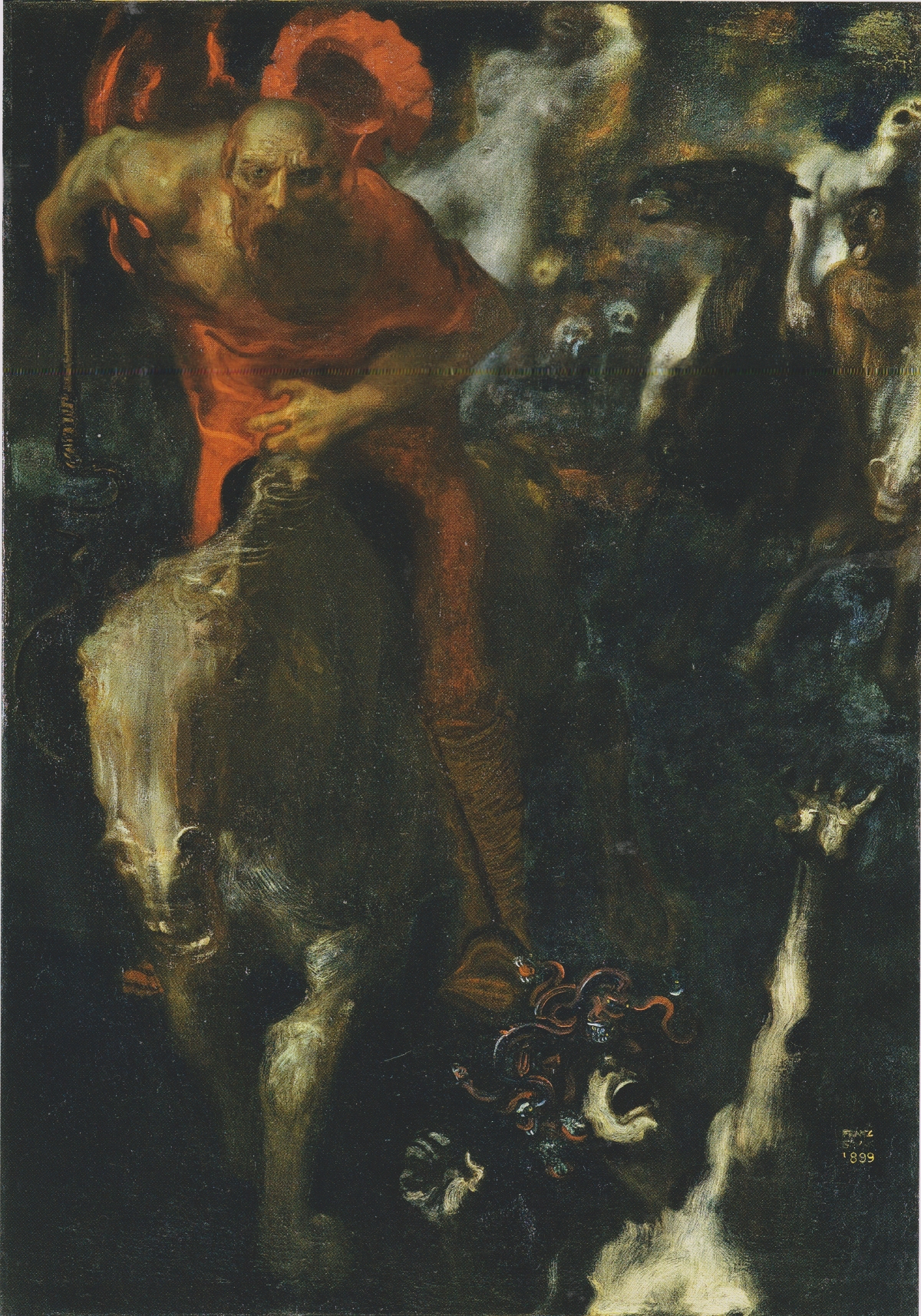 Franz Stuck (February 24, 1863 – August 30, 1928), ennobled as Franz Ritter von Stuck in 1906, was a German symbolist/Art Nouveau painter, sculptor, engraver, and architect. Stuck was born at Tettenweis, in Bavaria. From an early age he displayed an affinity for drawing and caricature. To begin his artistic education he relocated in 1878 to Munich, where he would settle for life. From 1881 to 1885 Stuck attended the Munich Academy. He first became well known by cartoons for Fliegende Blätter, and vignette designs for programmes and book decoration. In 1889 he exhibited his first paintings at the Munich Glass Palace, winning a gold medal for The Guardian of Paradise. In 1892 Stuck co-founded the Munich Secession, and also executed his first sculpture, Athlete. The next year he won further acclaim with the critical and public success of what is now his most famous work, the painting The Sin. Also during 1893, Stuck was awarded a gold medal for painting at the World’s Columbian Exposition in Chicago, and was appointed to a royal professorship.

In 1895 he began teaching painting at the Munich Academy. In 1897 Stuck married an American widow, Mary Lindpainter, and began work designing his own residence and studio, the Villa Stuck. His designs for the villa included everything from layout to interior decorations; for his furniture Stuck received another gold medal at the 1900 Paris World Exposition. Having attained much fame by this time, Stuck was ennobled on December 9, 1905 and would receive further public honours from around Europe during the remainder of his life. He continued to be well respected among young artists as professor at the Munich Academy, even after his artistic styles became unfashionable. Notable students of his over the years include Paul Klee, Hans Purrmann, Wassily Kandinsky, and Josef Albers. Franz von Stuck died on August 30, 1928; his funeral address memorialized him as “the last prince of art of Munich’s great days”. He is buried in the Munich Waldfriedhof next to his wife Mary.

Stuck’s subject matter was primarily from mythology, inspired by the work of Arnold Böcklin. Large forms dominate most of his paintings and indicate his proclivities for sculpture. His seductive female nudes are a prime example of popular Symbolist content. Stuck paid much attention to the frames for his paintings and generally designed them himself with such careful use of panels, gilt carving and inscriptions that the frames must be considered as an integral part of the overall piece. The number of Stuck’s pupils who achieved great success served to enhance the teacher’s own fame. Yet by the time of his death, Stuck’s importance as an artist in his own right had almost been forgotten: his art seemed old-fashioned and irrelevant to a generation which had endured World War I. Stuck’s reputation languished until the late 1960s when a renewed interest in Art Nouveau brought him to attention once more. In 1968 the Villa Stuck was opened to the public; it is now a museum.