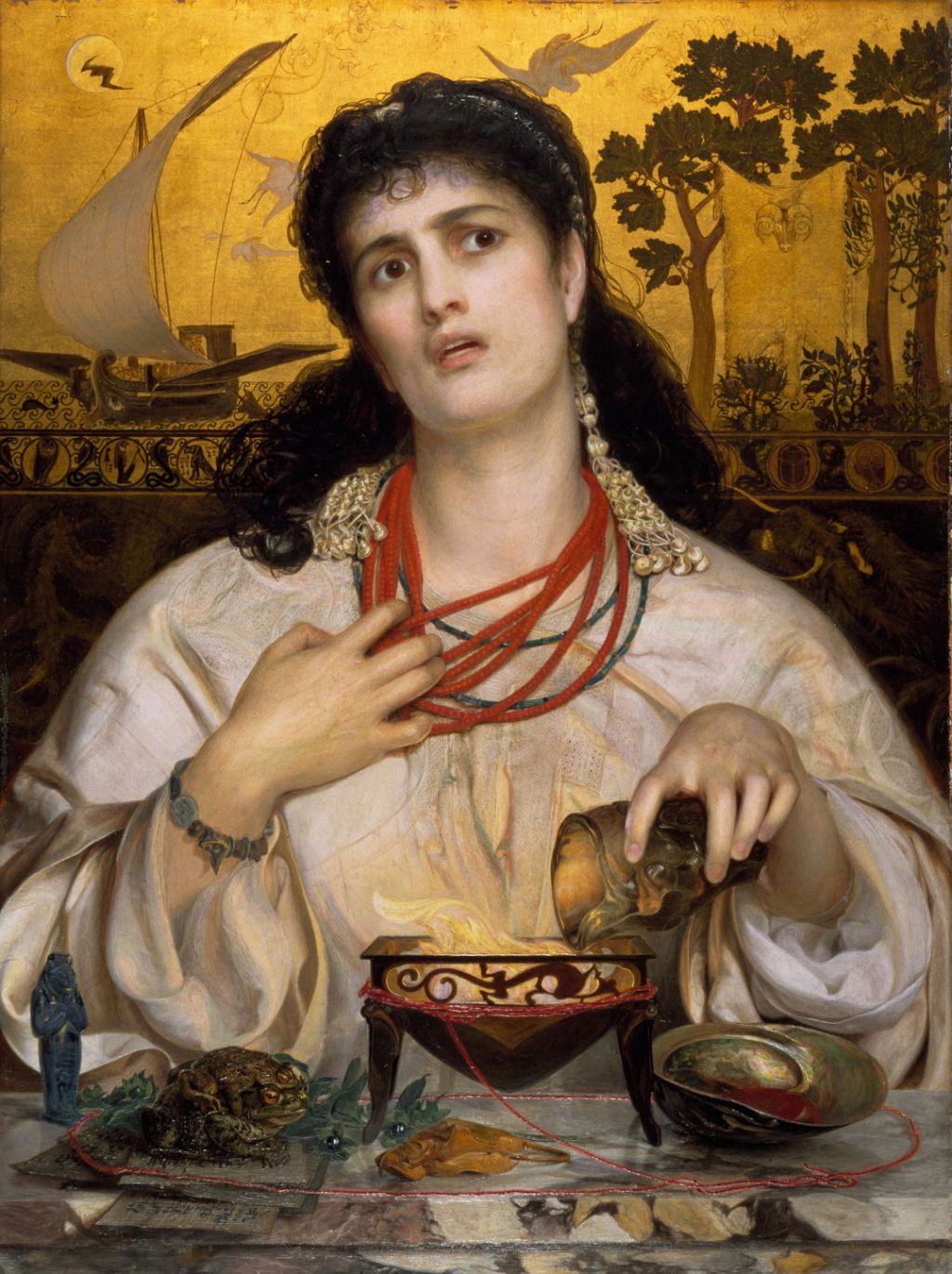 Anthony Frederick Augustus Sandys (born Antonio Frederic Augustus Sands) (1 May 1829 – 25 June 1904), but usually known as Frederick Sandys, was an English “Pre-Raphaelite” painter, illustrator and draughtsman, of the Victorian era. He was born in Norwich, England, and received his earliest lessons in art from his father, who was himself a painter. His early studies show that he had a natural gift for careful and beautiful drawing. In 1846 Sandys attended the Norwich School of Design. In the same and next year his talent was recognized by the Royal Society of Arts.
Personal relationships

He married Georgiana Creed, but this marriage only lasted three years, although they never divorced. He had a long affair with the Romany woman Keomi Gray, who sat as a model both for him and Dante Gabriel Rossetti, and perhaps also for Simeon Solomon. He and Gray had at least two sons. In 1862 Sandys met actress Mary Emma Jones, known as Miss Clive, when she modeled for The Magdalen, now owned by the Norwich Castle Museum. A relationship developed between the two, he became devoted to her, taking her as his common-law wife for the rest of his life. She gave birth to a large number of children, 10 of whom were raised under the name of Neville and survived after Sandys’ death. His work Proud Maisie made in 1867, was inspired by Mary, so much so that he made at least 11 versions by 1904.

He displayed great skills as a draughtsman, achieving recognition with his print parodying John Everett Millais’s Sir Isumbras at the Ford in 1857. The caricaturist turned the horse of Sir Isumbras into a donkey labelled J. R., Oxon. (John Ruskin). Upon it were seated Millais himself, in the character of the knight, with Rossetti and William Holman Hunt as the two children, one before and one behind. The caricature, produced using the new autographic lithographic, caused a lot of talk about who the artist might be and ultimately introduced Sandys to the London art community. Rossetti and Sandys became close friends, and from May 1866 to July 1867, Sandys lived with Rossetti in Cheyne Walk, Chelsea. Sandys works were profoundly influenced by those of Rossetti. He focused mainly on mythological subjects and portraits.

Some of the first introductions to Pre-Raphaelite teachings emerged in magazines, such as Once a Week, the Cornhill Magazine, Good Words and Sunday Magazine. Sandys began drawing in the 1860s for Once a Week, the Cornhill Magazine, Good Words and other periodicals, his work influenced by Albrecht Dürer, Ambrosius Holbein, and Alfred Rethel. Sandys made a total of 26 between 1859 and 1866, but each was a fine representation of this genre, faithfully engraved by professional wood-engravers, including the Dalziel brothers and Joseph Swain, that they are worthy of the collector’s portfolio. For the engravers to be successful in carving the intricate illustrations onto wood, they needed to start with a detailed, clear print from the artist. Sandys had an eye and talent for exacting detail, an intention to accurately reflect the subject, revealed in the quality of his works, equally impressive for its technical detail as for its imaginative point of view.

Sandys’ The Death of King Warwulf is an example of his ability to create drawings that translated well for the engravings. Swirling shapes of flames, the curve the boat, its sail and the king’s clothes that surround him create a feeling of movement. The focal point is the king’s bowed head. His last woodcut was on the subject of Danaë in the Brazen Chamber. It was engraved by Swain for Once A Week but suppressed by the publication’s editor, despite Sandys having the support of the magazine’s publishers, on the grounds that it was too sensuous.

He drew only in the magazines. No books illustrated by him can be traced. So his exquisite draughtsmanship has to be sought for in the old bound-up periodical volumes which are now hunted by collectors, or in publications such as Dalziels’ Bible Gallery and the Cornhill Gallery and books of drawings, with verses attached to them, made to lie upon the drawing-room tables of those who had for the most part no idea of their merits.

Studies for paintings
Study for Vivien depicts Sandy’s lover, Keomi Gray, as Vivien of Tennyson’s poem Idylls of the King. In the poem Vivien is the femme fatale in the story of King Arthur who used her looks to seduce Merlin to learn his secrets. Sandys had previously used tales from King Arthur as inspiration for his work, such as King Pelles’ Daughter. He was drawn to stories of women who “seduce, entrap and destroy men, such as Helen of Troy, Morgan Le Fay and Medea.” Sandys portrays Vivien as a beautiful, self-assured woman. The apple placed in front of her may refer to the story of Adam and Eve.

Study for Autumn, made in 1860, is one of the many studies Sandys made before painting Autumn and provides evidence of Sandys’ skill as a draughtsman. He captures minute details, such as the soldier’s uniform and the plants and flowers. The study is much like the finished painting, except that the ginger jar is in the foreground.

Sandys never became a popular painter. He painted little, and the dominant influence upon his art was the influence exercised by lofty conceptions of tragic power. There was in it a sombre intensity and an almost stern beauty which lifted it far above the ideals of the crowd. The Scandinavian Sagas and Le Morte d’Arthur gave him subjects after his own heart. The Valkyrie and Morgan le Fay represent his work at its very best.