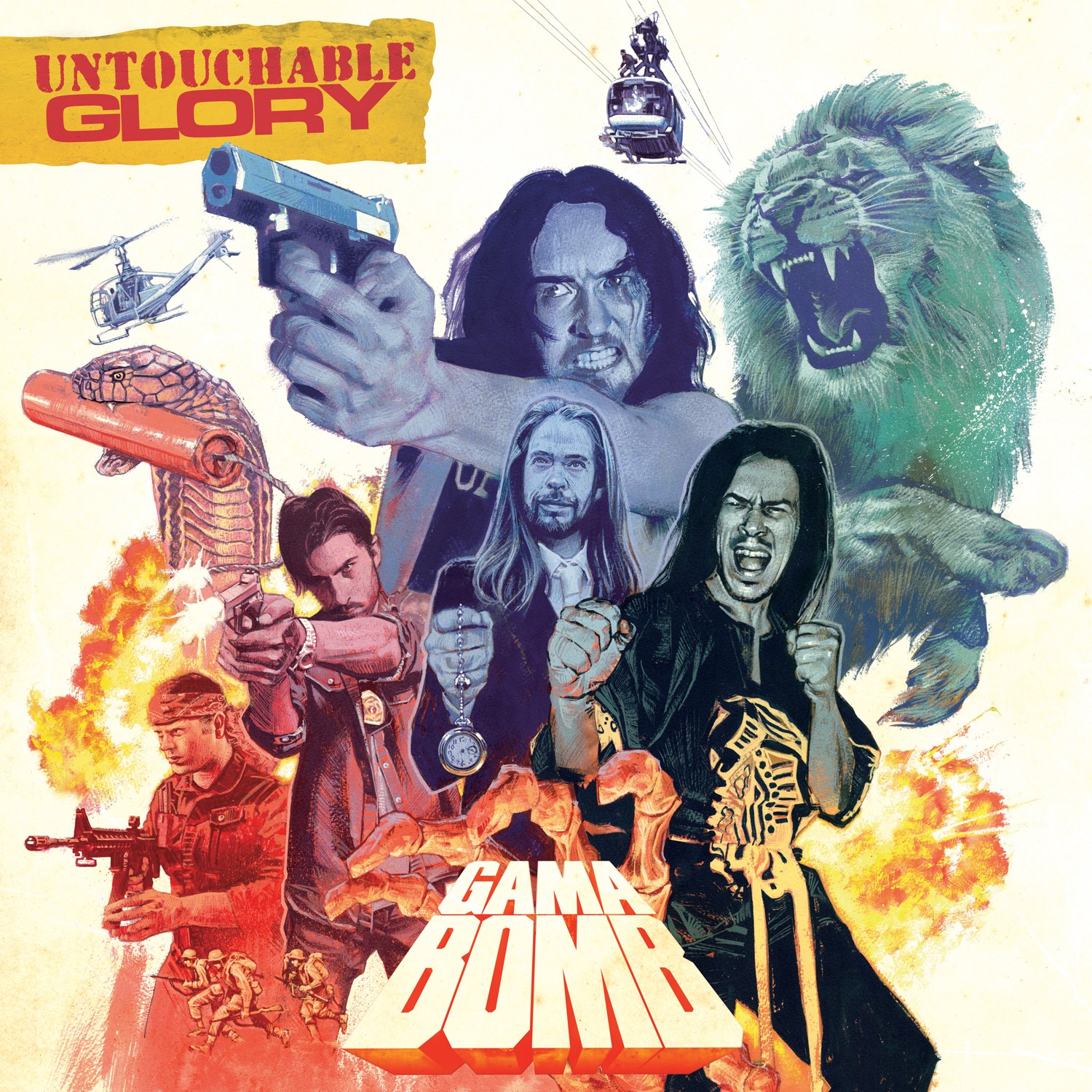 Thrashers Gama Bomb formed in Newry, Northern Ireland in 2002 and set out their agenda immediately; NO ballads! NO clean sounding guitars! NO synths! They cut their teeth playing backroom shows on the UK punk and hardcore circuit and self-released their debut album (Survival Of The Fastest) in 2005. The band; Philly Byrne on Vocals, Domo Dixon, Guitars, John Roche, Guitars, Joe McGuigan, Bass and Paul Caffrey, Drums have just released their 5th album, Untouchable Glory, on AFM Records.

Gama Bomb: It’s the biggest album title we could think of. This is our fifth album, so we really wanted to make it something big, something ballsy. A lot of bands start to fade away around their fifth album. We borrowed this pretty slick name from a 1988 kung fu b-movie because it says ‘Hey, we’re pretty cool dudes, maybe you should bang with us’.

Gama Bomb: The theme behind this album, loosely, is exploitation cinema. We’re big fans of Italian and Asian b-movies, so we wanted to reflect that. When the concept of the album cover is a retro movie poster came together, it made sense for us to be these different archetypal action heroes. Each of us chose which kind of hero we wanted to be – and those types are our personal favourites. Personally, I’ve always seen myself as a master criminal, at least in my mind.

Gama Bomb: The whole concept sprung from our partnership with Graham Humphreys – his mainstay as an artist is recreating that vintage movie poster style for re-released classic movies. He’s a portrait artist really, so we wanted to capitalise on that. The poster ended up being rammed with detail quite by accident, actually. Graham told us that most classic movie art features one or two central objects – you know, a spider and an oil rig, a skull and a plane, something like that. So he asked us for some ideas – we sent him a big list, and he dutifully jammed them all in there! So yeah, it’s thanks to his commitment that it’s so riotous.

HMA: Do you feel that your visuals are a proper representation of your music?

Gama Bomb: For us, that’s one of the most important things a band can do – to look like you sound, you know? To make music, then accompany it with imagery that enriches it, brings it to life. That’s what every classic band ever did. We’ve always taken that very seriously – working with artists who have the same interest in retro and camp art as ourselves. I think more metal bands should challenge the boundaries of their visuals, especially in thrash metal, which has so many visual tics associated with it there’s virtually no originality there anymore.

HMA: And the artist or artists that penned the artwork?

Gama Bomb: The cover was painted by Graham Humphreys, the artist best known for painting the original posters for A Nightmare On Elm Street and The Evil Dead. Graham is a cult legend. Just as importantly, the sleeve and inlay were designed by Rory McGuigan. Rory is the brother of our bassist Joe and is also a well-established sleeve designer in his own right. Rory’s worked for big alternative acts Villagers and Damien Rice. He’s a genius and encourages us to take a very high-detail approach to album design. He created a separate movie poster for each track that’s completely authentic to a different time, place and niche of exploitation cinema. He’s a genius, basically.

HMA: Moreover “…They can only agree on one thing – REVENGE, And GLORY. UNTOUCHABLE GLORY”. The “REVENGE” is in reference to whom? and what is the ultimate “GLORY”?

Gama Bomb: Yeah, this is all from the blurb on the back of the record. The intention here, and this was very much driven by Rory, that we should provide him with a blurb much like you’d find on the back of old VHS tapes. You know, about 100 words of sheer nonsense that would sum up the story. The ‘one thing’ idea is just a joke – I wrote the copy for that – because we can only agree on one thing, but there are two things we agree on. That’s a very GB joke.

HMA: If Gama Bomb was assigned the task of rewriting a soundtrack what movie/s would you pick and why?

Gama Bomb: We’d be the band playing in the background in a Judge Reinhold movie when he goes to a nightclub to solve a crime. Or he’s body-swapped with a dog.

HMA: …And who should be the graphic artist to execute the album cover?

Gama Bomb: Graham Humphries, baby. He’s the man for us.

Untouchable Glory the new Gama Bomb album, is out now on AFM Records – you can find them at www.gamabomb.net | www.facebook.com/gamabomb | @gamabombspeaks