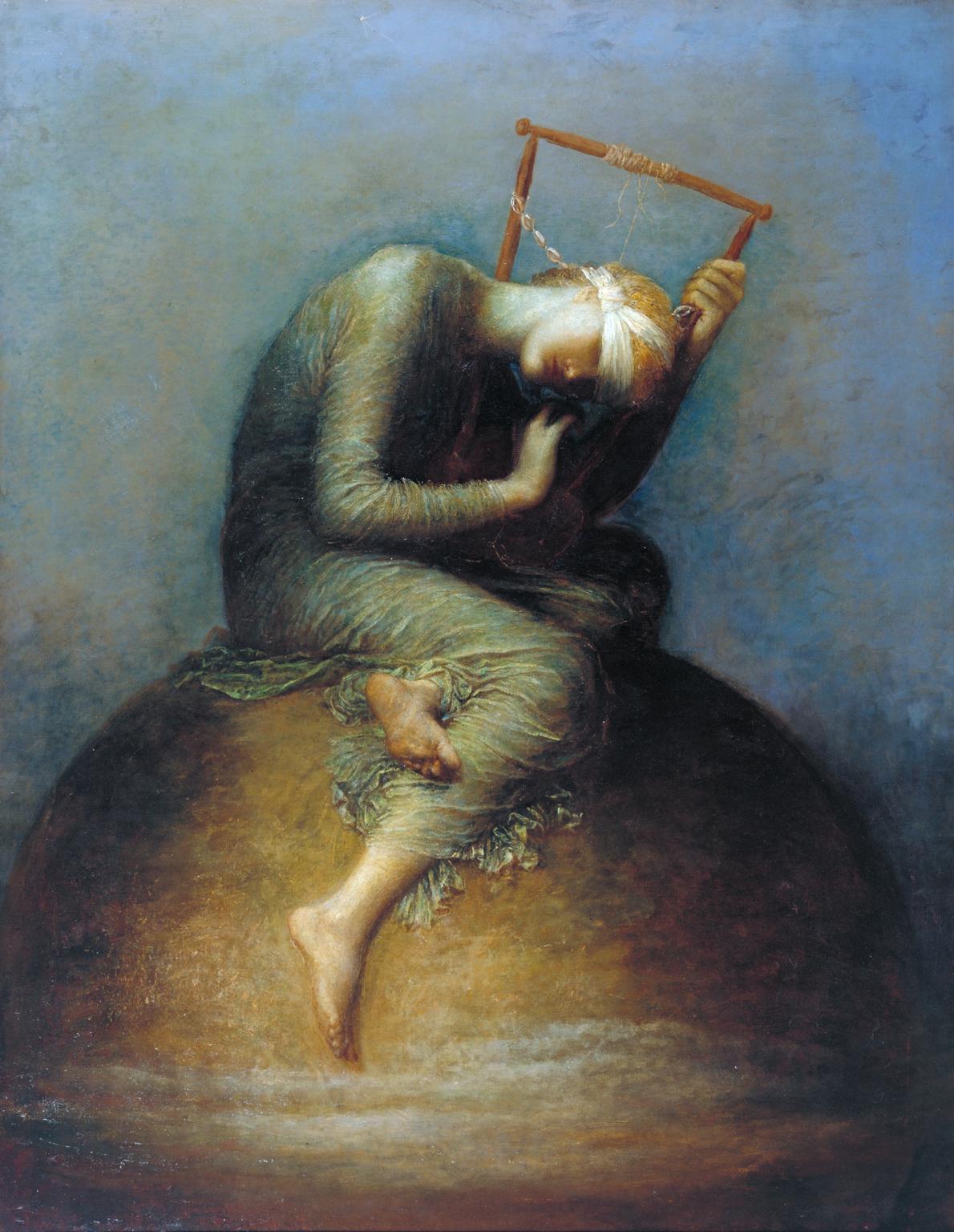 George Frederic Watts, OM (23 February 1817 – 1 July 1904) was a popular English Victorian painter and sculptor associated with the Symbolist movement. Watts became famous in his lifetime for his allegorical works, such as Hope (see image) and Love and Life. These paintings were intended to form part of an epic symbolic cycle called the “House of Life”, in which the emotions and aspirations of life would all be represented in a universal symbolic language.

In his late paintings, Watts’ creative aspirations mutate into mystical images such as The Sower of the Systems, in which Watts seems to anticipate abstract art. This painting depicts God as a barely visible shape in an energised pattern of stars and nebulae. Some of Watts’ other late works also seem to anticipate the paintings of Picasso’s Blue Period. He was also admired as a portrait painter. His portraits were of the most important men and women of the day, intended to form a “House of Fame”. Many of these are now in the collection of the National Portrait Gallery – 17 were donated in 1895, with more than 30 more added subsequently. In his portraits Watts sought to create a tension between disciplined stability and the power of action. He was also notable for emphasising the signs of strain and wear on his sitter’s faces. Sitters included Charles Dilke, Thomas Carlyle and William Morris.

In 1887 Watts proposed to commemorate the Golden Jubilee of Queen Victoria by creating a Memorial to Heroic Self Sacrifice to commemorate ordinary people who had died saving the lives of others, and who might otherwise have been forgotten. The scheme was not accepted at that time, but in 1898 Watts was approached by Henry Gamble, vicar of St Botolph’s Aldersgate church. He suggested the memorial could be created in Postman’s Park in the City of London.

The memorial was unveiled in an unfinished state in 1900, consisting of a 50-foot (15 m) wooden loggia designed by Ernest George, sheltering a wall with space for 120 ceramic memorial tiles to be designed and made by William De Morgan. At the time of opening, only four of the memorial tiles were in place. Watts died in 1904, and his widow Mary Watts took over the running of the project. Several reverent biographies of Watts were written shortly after his death. With the emergence of Modernism, however, his reputation declined. Virginia Woolf’s comic play Freshwater portrays him in a satirical manner, an approach also adopted by Wilfred Blunt, former curator of the Watts Gallery, in his irreverent 1975 biography England’s Michelangelo. In his 1988 book on Ruskin, the art critic Peter Fuller emphasized Watts’s spiritual and stylistic importance, also noting that late post-symbolist works such as The Sower of the Systems “stretched beyond the brink of abstraction”.[4] On the centenary of his death Veronica Franklin Gould published G.F. Watts: The Last Great Victorian, a positive study of his life and work.