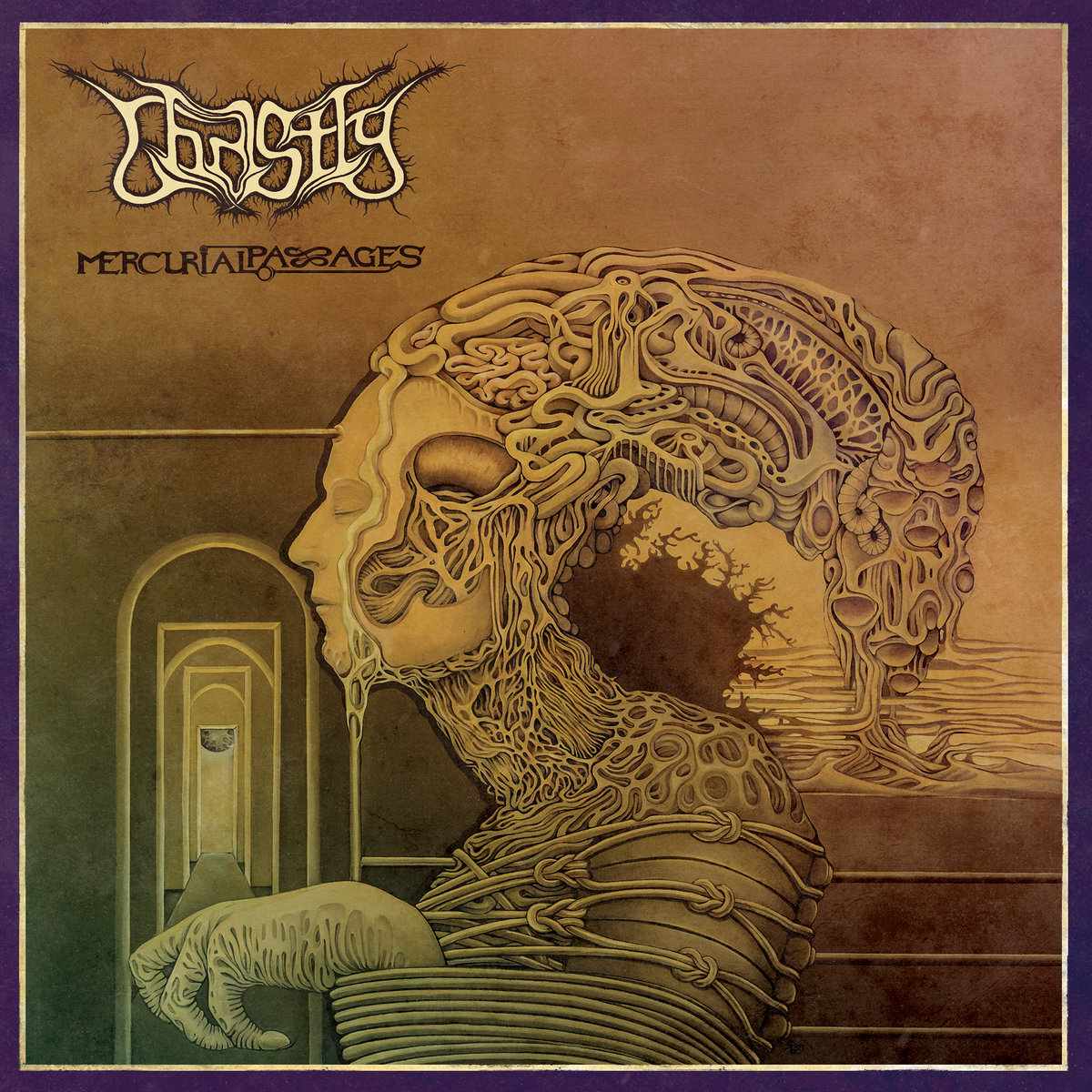 Ghastly was formed in 2011 by Ian J. d’Waters and Gassy Sam as a side project. A demo, ‘Death is Present’, was released the same year, and it gave enough feedback for Ghastly to make a 7″ and led to the making of a debut album ‘Carrion of Time’, released in 2015 by Me Saco Un Ojo Records. A few years are laying low; another album ‘Death Velour’, was released by 20 Buck Spin in 2018. The sophomore album introduced Johnny Urnripper as a second vocalist and guitarist. Three years later, and amid the pandemic ‘Mercurial Passages’ was released in 2021.

Ian: My music is just basic death metal with influences from many sources. The path of going forwards and learning new things while you still pay homage to the pioneers is what the creation of arts is all about. Doing the same thing album after album is not something I want to do or, to put it more clearly, I can’t.

‘Mercurial Passages’ took a while to be released because of the pandemic, but it was all for the good as I had time to learn new tricks with recording and mixing. Our recent record is darker and rawer than previous ones; there isn’t any glimpse of light at the end of the tunnel. All our albums today have been created the same way; I compose music and record most or all of the instruments by myself. Gassy Sam and Johnny Urnripper are the ones who are guilty of growling on our records, and for the lyrics, it’s Andy Gordon who writes all the poetry.

Andy: The lyrics are about death and dying. That might sound like a tongue-in-cheek answer, but it’s also true. Like the music, the lyrics have evolved quite a bit in the last ten years. The first Ghastly lyrics started with Ian referencing certain classic horror movies and asking if I wanted to write some lyrics based on those. The lyrics were never just a recitation of the movies, but those for sure influenced them. Indeed a suitable vibe for death metal but not personal or original. The lyrics took a far more personal tone with the second and third albums. While the lyrics have never been very gory, the earlier lyrics were still more about the physical side of death, whereas the newer texts work more on the mental side. They take a much more psychological approach to the subject matter and allow me to dive into some pretty dark places of my psyche.

Continuing from what I wrote above, after going through a short horror-inspired phase, I’ve written a lot about my personal experiences and real-life events I see happening in my own life and all over the world. Many lyrics, especially on the third album, were about dreams; some were written in a dream-like state, where I wanted the words to flow through me with as little self-censorship as possible. But while the subject matter for the lyrics has become more and more real, some are much more metaphorical, symbolic, and I’d also say poetic than the early Ghastly lyrics. What inspires me to write lyrics for Ghastly is how I see everything in this world dying on the inside. That includes the world as an ecosystem, humans as a species, people around me, and myself. That works on so many levels and is something I find equally inspiring and depressing.

Ian: For the music, what happens is usually just purely accidental. I started playing something random on a guitar, and through this process, I found riffs or passages that my attention would catch. There is a time and place for the music to come out of me; I can’t force it or speed it up. Of course, the inspirational things to start playing the instrument are usually the music I love and also, very important, movies.

I haven’t thought of the philosophical point of my music much. It is a portal that allows me to clear all feelings out of my system. Ghastly’s music isn’t something I want to address as religious or materialistic but escapism. It is a soundtrack to psychedelic experiences, nightmares and cosmic travels. What comes to life itself, I find all religions as the cancer of the world, alongside those people who want power and control over the world or a country.

It must have been Metallica, especially the song ‘Ride the Lightning’, that struck me first. After that, Morbid Angel, Sepultura, Cannibal Corpse and Amorphis led me to more sinister music. Tales from the Thousand Lakes, Altars of Madness, Left Hand Path and Schizophrenia are the main reasons I do death metal. Those albums were such powerful experiences in their way back in my teen years that they changed the course for me.

Music is important because it is the best way to let out the artist in me. An album can take you back to where you once were and is a strong emotional vessel. Music unites us, but I’m not one of those metal brothers at festivals. To some, it is just pure entertainment, which is not bad, but I need something more from a song or an artist than just entertainment. I don’t want to go to a gig where the show is the thing, and the music is just background noise. I loathe showing off, as even though I understand more prominent bands have shows that are more like a theatre than a gig, I would like to watch a band play without silly costumes or choreography.