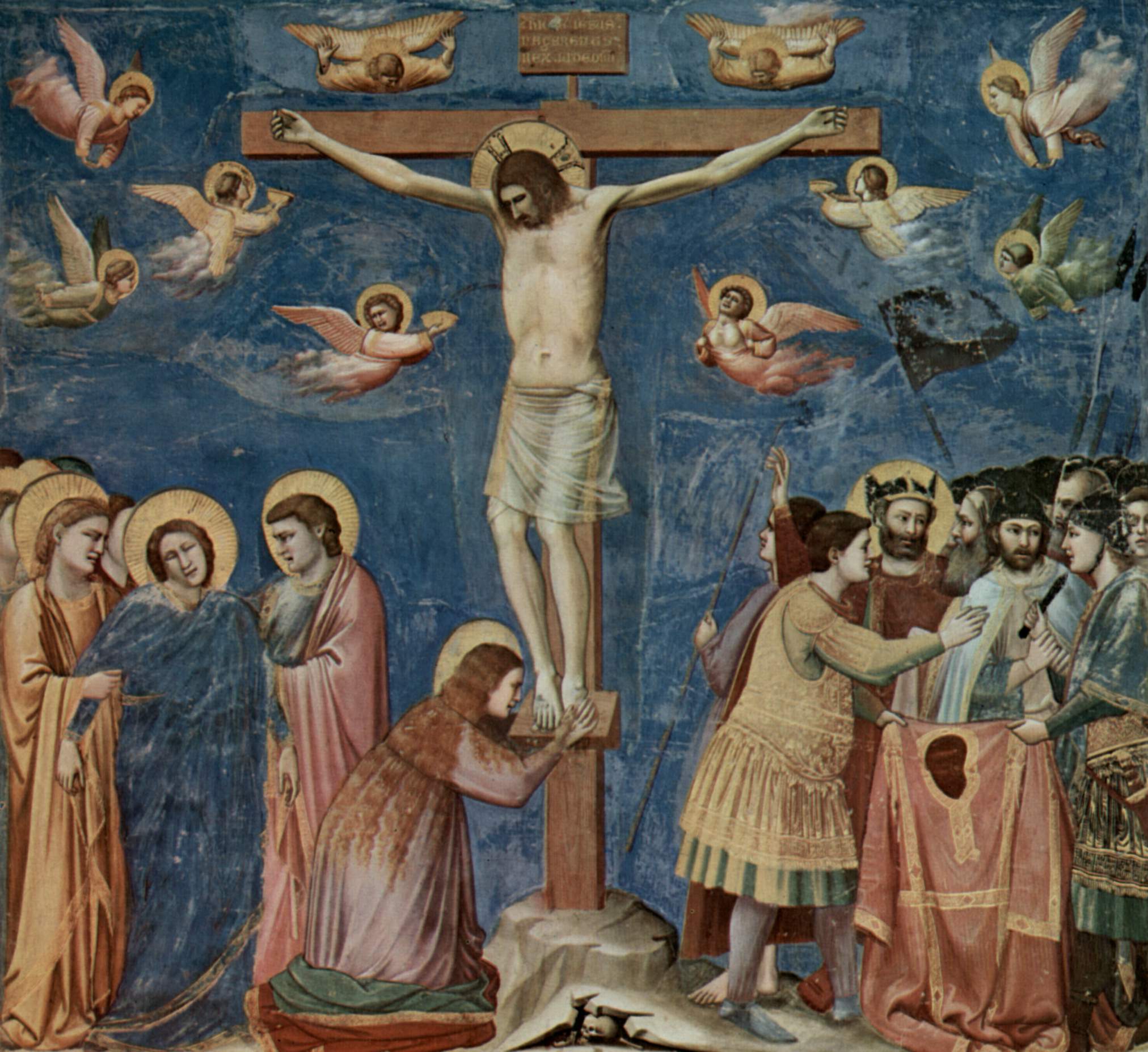 “The first of the great personalities in Florentine painting was Giotto. Although he affords no exception to the rule that the great Florentines exploited all the arts in the endeavor to express themselves, he, Giotto, renowned as an architect and sculptor, reputed as wit and versifier, differed from most of his Tuscan successors in having a peculiar aptitude for the essential in painting as an art .

“Well, it was of the power to stimulate the tactile consciousness of the essential, as I have ventured to call it, in the art of painting that Giotto was supreme master. This is his everlasting claim to greatness, and it is this which will make him a source of highest aesthetic delight for a period at least as long as decipherable traces of his handiwork remain on mouldering panel or crumbling wall. For great though he was as a poet, enthralling as a story teller, splendid and majestic as a composer, he was in these qualities superior in degree only, to many of the masters who painted in various parts of Europe during the thousand years that intervened between the decline of antique, and the birth, in his own person, of modem painting. But none of these masters had the power to stimulate the tactile imagination, and, consequently, they never painted a figure which has artistic existence. Their works have value, if at all, as highly elaborate, very intelligible symbols, capable, indeed, of communicating something, but losing all higher value the moment the message is delivered.

“Giotto’s paintings, on the contrary, have not only as much power of appealing to the tactile imagination as is possessed by the objects represented human figures in particular but actually more; with the necessary result that to his contemporaries they conveyed a keener sense of reality, of life likeness than the objects themselves! We whose current knowledge of anatomy is greater, who expect more articulation and suppleness in the human figure, who, in short, see much less naively now than Giotto’s contemporaries, no longer find his paintings more than life like; but we still feel them to be intensely real in the sense that they powerfully appeal to our tactile imagination, thereby compelling us, as do all things that stimulate our sense of touch while they present themselves to our eyes, to take their existence for granted. And it is only when we can take for granted the existence of the object painted that it can begin to give us pleasure that is genuinely artistic, as separated from the interest we feel in symbols…

“Let us now turn back to Giotto and see in what way he fulfils the first condition of painting as an art, which condition, as we agreed, is somehow to stimulate our tactile imagination. We shall understand this without difficult) if we cover with the same glance two pictures of, nearly the same subject that hang side by side in the Uffizi at Florence, one by ‘Cimabue’, and the other by Giotto. The difference is striking, but it does not consist so much in a difference of pattern and types, as of realization. In the ‘Cimabue’ we patiently decipher the lines and colours, and we conclude at last that they were intended to represent a woman seated, men and angels standing by or kneeling. To recognize these representations we have had to make many times the effort that the actual objects would have required, and in consequence our feeling of capacity has not only not been confirmed, but actually put in question. With what sense of relief, of rapidly rising vitality, we turn to the Giotto 1 Our eyes scarcely have had time to light on it before we realize it completely the throne occupying a real space, the Virgin satisfactorily seated upon it, the angels grouped in rows about it. Our tactile imagination is put to play immediately. Our palms and fingers accompany our eyes much more quickly than in presence of real objects, the sensations varying constantly with the various projections represented, as of face, torso, knees; confirming in every way our feeling of capacity for coping with things~ for life, in short. I care little that the picture endowed with the gift of evoking such feelings has faults, that the types represented do not correspond to my ideal of beauty, that the figures are too massive, and almost unarticulated; I forgive them all, because I have much better to do than to dwell upon faults.

“But how does Giotto accomplish this miracle? With the simplest means, with almost rudimentary light and shade, and functional line, he contrives to render, out of all the possible outlines, out of all the possible variations of light and shade that a given figure may have, only those that we must isolate for special attention when we are actually realizing it. This determines his types, his schemes of colour, even his compositions. He aims at types which both in face and figure are simple, large boned, and massive types, that is to say, which in actual life would furnish the most powerful stimulus to the tactile imagination. Obliged to get the utmost out of his rudimentary light and shade, he makes his scheme of colour of the lightest that his contrasts may be of the strongest. In his compositions he aims at clear ness of grouping, so that each important figure may have its desired tactile value. Note in the ‘Madonna’ we have been looking at, how the shadows compel us to realize every concavity, and the lights every convexity, and how, with the play of the two, under the guidance of line, we realize the significant parts of each figure, whether draped or undraped. Nothing here but has its architectonic reason. Above all, every line is functional; that is to say, charged with purpose. Its existence, its direction, is absolutely determined by the need of rendering the tactile values. Follow any line here, say in the figure of the angel kneeling to the left, and see how it outlines and models, how it enables you to realize the head, the torso, the hips, the legs, the feet, and how its direction, its tension, is always determined by the action. There is not a genuine fragment of Giotto in existence but has these qualities, and to such a degree that the worst treatment has not been able to spoil them. Witness the resurrected frescoes in Santa Croce at Florence!

“The rendering of tactile values once recognized as the most important specifically artistic quality of Giotto’s work, and as his personal contribution to the art of painting, we are all the better fitted to appreciate his more obvious though less peculiar merits must add, which would seem far less extraordinary if it were not for the high plane of reality on which Giotto keeps us. Now what is behind this power of raising us to a higher plane of reality but a genius for grasping and communicating real significance? What is it to render the tactile values of an object but to communicate its material significance? A painter who, after generations of mere manufacturers of symbols, illustrations, and allegories, had the power to render the material significance of the objects he painted, must, as a man, have had a profound sense of the significant. No matter, then, what his theme, Giotto feels its real significance and communicates as much of it as the general limitations of his art and of his own skill permit. When the theme is sacred story, it is scarcely necessary to point out with what processional gravity, with what hieratic dignity, with what sacramental intentness he endows it; the eloquence of the greatest critics has here found a darling subject. But let us look a moment at certain of his symbols in the Arena at Padua, at the ‘Inconstancy’, the ‘Injustice’, the ‘Avarice’, for instance. ‘What are the significant traits’, he seems to have asked himself, ‘in the appearance and action of a person under the exclusive domination of one of these vices? Let me paint the person with these traits, and I shall have a figure that perforce must call up the vice in question! So he paints ‘Inconstancy’ as a woman with a blank face, her arms held out aimlessly, her torso falling backwards, her feet on’ the side of a wheel. It makes one giddy to look at her. ‘Injustice’ is a powerfully built man in the vigour of his years dressed in the costume of a judge, with his left hand clenching the hilt of his sword, and his clawed right hand grasping a double hooked lance. His cruel eye is sternly on the watch, and his attitude is one of alert readiness to spring in all his giant force upon his prey. He sits enthroned on a rock, overtowering the tall waving trees, and below him his underlings are stripping and murdering a wayfarer. ‘Avarice’ is a homed hag with ears like trumpets. A snake issuing from her mouth curls back and bites her forehead. Her left hand clutches her money bag, as she moves forward stealthily, her right hand ready to shut down on whatever it can grasp. No need to label them: as long as these vices exist, for so long has Giotto extracted and presented their visible significance.

“Still another exemplification of his sense for the significant is furnished by his treatment of action and movement. The grouping, the gestures never fail to be just such as will most rapidly convey the meaning. So with the significant line, the significant light and shade, the significant look up or down, and the significant gesture, with means technically of the simplest, and, be it remembered, with no knowledge of anatomy, Giotto conveys a complete sense of motion such as we get in his Paduan frescoes of the ‘Resurrection of the Blessed’, of the ‘Ascension of our Lord’, of the God the rather in the ‘Baptism’, or the angel in ‘Zacharias’ Dream’.

“This, then, is Giotto’s claim to everlasting appreciation as an artist: that his thoroughgoing sense for the significant in the visible world enabled him so to represent things that we realize his representations more quickly and more completely than we should realize the things themselves, thus giving us that confirmation of our sense of capacity which is so great a source of pleasure.”

From: Bernard Berenson, “Italian Painters of the Renaissance”