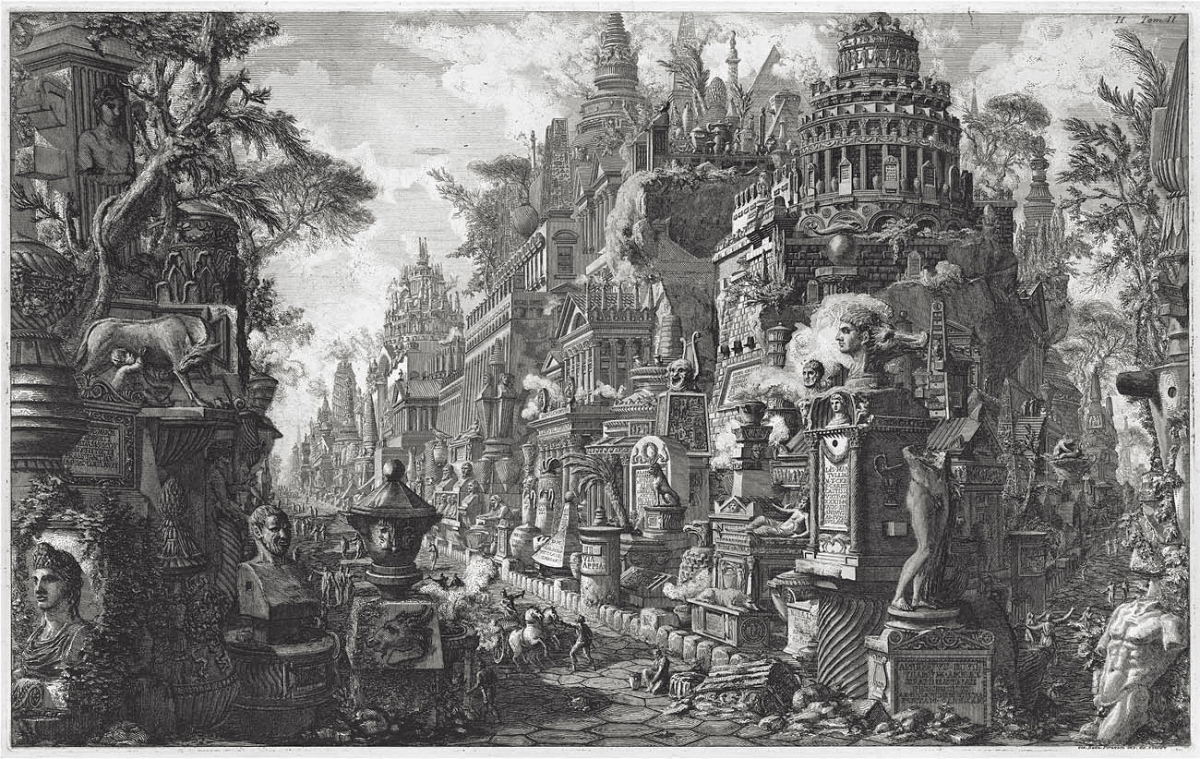 Piranesi was born in Mogliano Veneto, near Treviso, then part of the Republic of Venice. His brother Andrea introduced him to Latin and the ancient civilization, and later he studied as an architect under his uncle, Matteo Lucchesi, who was Magistrato delle Acque, a Venetian engineer who specialized in excavation.

From 1740 he was in Rome with Marco Foscarini, the Venetian envoy to the Vatican. He resided in the Palazzo Venezia and studied under Giuseppe Vasi, who introduced him to the art of etching and engraving. After his studies with Vasi, he collaborated with pupils of the French Academy in Rome to produce a series of vedute (views) of the city; his first work was Prima parte di Architettura e Prospettive (1743), followed in 1745 by Varie Vedute di Roma Antica e Moderna.

From 1743 to 1747 he sojourned mainly in Venice where, according to some sources, he frequented Giovanni Battista Tiepolo. He then returned to Rome, where he opened a workshop in Via del Corso. In 1748–1774 he created a long series of vedute of the city which established his fame. In the meantime Piranesi devoted himself to the measurement of many of the ancient edifices: this led to the publication of Antichità Romane de’ tempo della prima Repubblica e dei primi imperatori (“Roman Antiquities of the Time of the First Republic and the First Emperors”). In 1761 he became a member of the Accademia di San Luca and opened a printing facility of his own. In 1762 the Campo Marzio dell’antica Roma collection of engravings was printed.

The following year he was commissioned by Pope Clement XIII to restore the choir of San Giovanni in Laterano, but the work did not materialize. In 1764 Piranesi started his sole architectural works of importance, the restoration of the church of Santa Maria del Priorato in the Villa of the Knights of Malta in Rome, where he was buried after his death, in a tomb designed by Giuseppi Angelini.

In 1767 he was created a knight of the Golden Spur, which enabled him henceforth to sign himself “Cav[aliere] Piranesi”. In 1769 his publication of a series of ingenious and sometimes bizarre designs for chimneypieces, as well as an original range of furniture pieces, established his place as a versatile and resourceful designer.[1] In 1776 he created his famous Piranesi Vase, his best known work as a ‘restorer’ of ancient sculpture. In 1777–78 Piranesi published Avanzi degli Edifici di Pesto, (Remains of the Edifices of Paestum) a collection of views of Paestum. He died in Rome in 1778 after a long illness and buried in the Church of Santa Maria del Priorato, on the Aventine hill in Rome.

The remains of Rome kindled Piranesi’s enthusiasm. He was able to faithfully imitate the actual remains of a fabric; his invention in catching the design of the original architect provided the missing parts; his masterful skill at engraving introduced groups of vases, altars, tombs that were absent in reality; and his broad and scientific distribution of light and shade completed the picture, creating a striking effect from the whole view. Some of his later work was completed by his children and several pupils.

Piranesi’s son and coadjutor, Francesco, collected and preserved his plates, in which the freer lines of the etching-needle largely supplemented the severity of burin work. Twenty-nine folio volumes containing about 2000 prints appeared in Paris (1835–1837). The late Baroque works of Claude Lorrain, Salvatore Rosa, and others had featured romantic and fantastic depictions of ruins; in part as a memento mori or as a reminiscence of a golden age of construction. Piranesi’s reproductions of real and recreated Roman ruins were a strong influence on Neoclassicism.

The Prisons (Carceri d’invenzione or ‘Imaginary Prisons’), is a series of 16 prints produced in first and second states that show enormous subterranean vaults with stairs and mighty machines. These in turn influenced Romanticism and Surrealism. While the Vedutisti (or “view makers”) such as Canaletto and Bellotto, more often reveled in the beauty of the sunlit place, in Piranesi this vision takes on a Kafkaesque, Escher-like distortion, seemingly erecting fantastic labyrinthian structures, epic in volume. They are capricci, whimsical aggregates of monumental architecture and ruin.

The series was started in 1745. The first state prints were published in 1750 and consisted of 14 etchings, untitled and unnumbered, with a sketch-like look. The original prints were 16″ x 21″. For the second publishing in 1761, all the etchings were reworked and numbered I–XVI (1–16). Numbers II and V were new etchings to the series. Numbers I through IX were all done in portrait format (taller than they are wide), while X to XVI were landscape (wider than they are high). Thomas De Quincey in Confessions of an English Opium-Eater (1820) wrote the following:

Many years ago, when I was looking over Piranesi’s Antiquities of Rome, Mr. Coleridge, who was standing by, described to me a set of plates by that artist … which record the scenery of his own visions during the delirium of a fever: some of them (I describe only from memory of Mr. Coleridge’s account) representing vast Gothic halls, on the floor of which stood all sorts of engines and machinery, wheels, cables, pulleys, levers, catapults, etc., etc., expressive of enormous power put forth, and resistance overcome. Creeping along the sides of the walls, you perceived a staircase; and upon it, groping his way upwards, was Piranesi himself: follow the stairs a little further, and you perceive it come to a sudden abrupt termination, without any balustrade, and allowing no step onwards to him.

An in-depth analysis of Piranesi’s Carceri was written by Marguerite Yourcenar in her Dark Brain of Piranesi: and Other Essays (1984). Further discussion of Piranesi and the Carceri can be found in The Mind and Art of Giovanni Battista Piranesi by John Wilton-Ely (1978). The style of Piranesi was imitated by 20th-century forger Eric Hebborn.