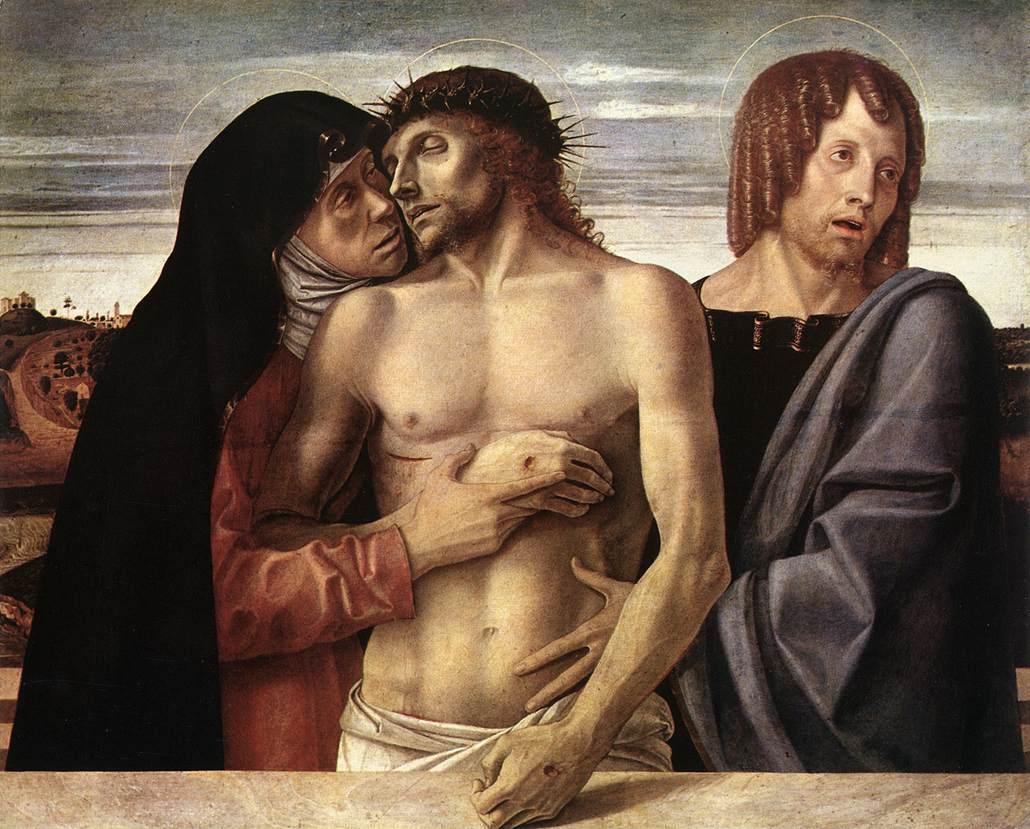 The Resurrection by Giovanni Bellini

Easter Sunday’s picture is Giovanni Bellini’s intensely beautiful and uplifting Resurrection. Now in the Gemaldegalerie in Berlin, it was originally commissioned by a Venetian aristocrat, Marco Zorzi, as the altarpiece of his family’s funerary chapel in the church of San Michele in Isola, a small island between Venice and Murano. On 5 June 1475, Zorzi received permission from the monks of the church “to have constructed a chapel in honour of … the glorious Virgin Mother Mary, in which he might build a tomb for his body and for the bodies of his heirs and successors … and have erected an altar in honour of the glorious Virgin Mary.” He  agreed to pay for “all the things and ornaments needed for celebration of Mass and all other divine offices” and to provide for Masses to be said there, for the benefit of his soul and those of his relations, after his death. At some point before 1479, when all the work was complete, Zorzi must have changed his mind about the dedication of the altar, instructing Bellini to paint not the Virgin Mary but, instead, Christ rising from the sepulchre. It was an appropriate subject, given the setting. The painting’s message of radiant hope – “Death, where is thy sting?” –  would have come across all the more pointedly in a burial chapel.

Renaissance painters tackling the theme of the Resurrection had little guidance from scripture, where the moment itself is not described, only its aftermath. (Christ’s subsequent reappearances to the disciples are more fully fleshed out, which explains the greater popularity, in Christian art, of subjects such like the supper at Emmaus.) For many hundreds of years the Church discouraged the portrayal of the Resurrection altogether, its earliest appearance in Italian art occurring as late as the fourteenth century, in the work of Giotto. Bellini’s treatment of the theme was bold and unusual. Instead of depicting Christ at the moment when he rose from the grave, he showed him hovering in the air above the empty sepulchre, in a hilly landscape strongly evocative of the Veneto (the conical hill with a castle on its peak has been convincingly identified as an imaginative view of Monselice, a Venetian subject town on the Italian  mainland).  The Lord’s gesture of benediction is unwittingly mirrored by the surprised soldier standing at the entrance to the now empty tomb. Next to him, another guardian of the sepulchre sleeps where he sits, slumped on an outcrop of rock. The other dozing figure, shown all but nude with a classically decorated shield by his side, has probably been included to symbolise the fallen world of paganism, conquered by the Christian faith. In the middle distance, the women approach the sepulchre, only Mary Magdalene (identified by her red clothes) seeming to notice the miracle that has taken place. Perhaps Bellini had the Gospel of St Mark in mind when he painted this particular detail: “Now when Jesus was risen… he appeared first to Mary Magdalene, out of whom he had cast seven devils.”

Within less than a century of the artist’s death, the reforming theologians of the Council of Trent would explicitly condemn this type of treatment of the Resurrection, arguing that it was insufficiently grounded in the scriptures and too easily confused with the very different subject of Christ’s Ascension into heaven. Yet Bellini’s conception seems totally justified and movingly, poetically true to the significance of this particular moment in the Christian story. Christ is about a head taller than any of the other figures in the painting, a deliberate departure from naturalism which serves to emphasise that this is no ordinary, mundane event. His body is as pale as porcelain and utterly unblemished, visible proof that the resurrection of his flesh has indeed been complete. Bellini has also elected to give him an affectingly slight physique, perhaps because he wished to evoke the pathos of Christ’s frail form as it was, so recently in the story, when tortured to death on the cross.

An essential part of the brilliance of the picture, it seems to me, is the way in which it simultaneously evokes and so to speak reverses the theme of the Crucifixion – a subject doubtless treated in the other paintings and sculptures that once adorned the little island church for which Bellin’s Reusrrection was destined. The figure of Christ has been raised to approximately the same height as it would be in an altarpiece showing him nailed to the cross. Yet now, of course, the cross has vanished; He has been made whole; and we see Him triumphant rather than suffering. As if to reinforce this dimension of his meaning, Bellini has placed a soldier with a spear at the bottom right of the composition. This figure, of coarse and somewhat brutish aspect, calls to mind the soldier who pierced Christ’s side in the time of his agony. Yet once again all is not as it was before; and this representative of Christ’s erstwhile tormentors can only stare in wonderment at the figure miraculously suspended above him.

The landscape in which the scene is set contributes radiantly to this chain of reversed associations. Bellini has raised the figure of Christ above a sepulchre set into a stony mound, the form of which strongly recalls that of Golgotha – “the place of the skull”, on which the cross was erected – as it had traditionally been depicted in Christian art. But once more the morbid resemblance is evoked only for its meaning to be joyfully overturned. The place of the skull is now not a place of death but of rebirth and fertility, where plants burgeon and a pair of rabbits skip and frolic. Even the rocks have an unexpected beauty, their whorls and patterns recalling the wavy decorations of Venetian glass and chalcedony – most of which was (and still is) made on the nearby island of Murano, which the glassblowers had made their own.

The joy and beauty of the moment reaches its climax, both pictorially and emotionally, in Bellini’s depiction of the morning sky. The translucency and luminescence of painting in oils – a relatively new technique, pioneered in Northern Europe, which Bellini was one of the first Italian painters to master – has been exploited to the full. Cirrus clouds, tinged red by the rising sun, explode against a gradually lightening azure sky. After the darkness of night, an astonishing dawn.