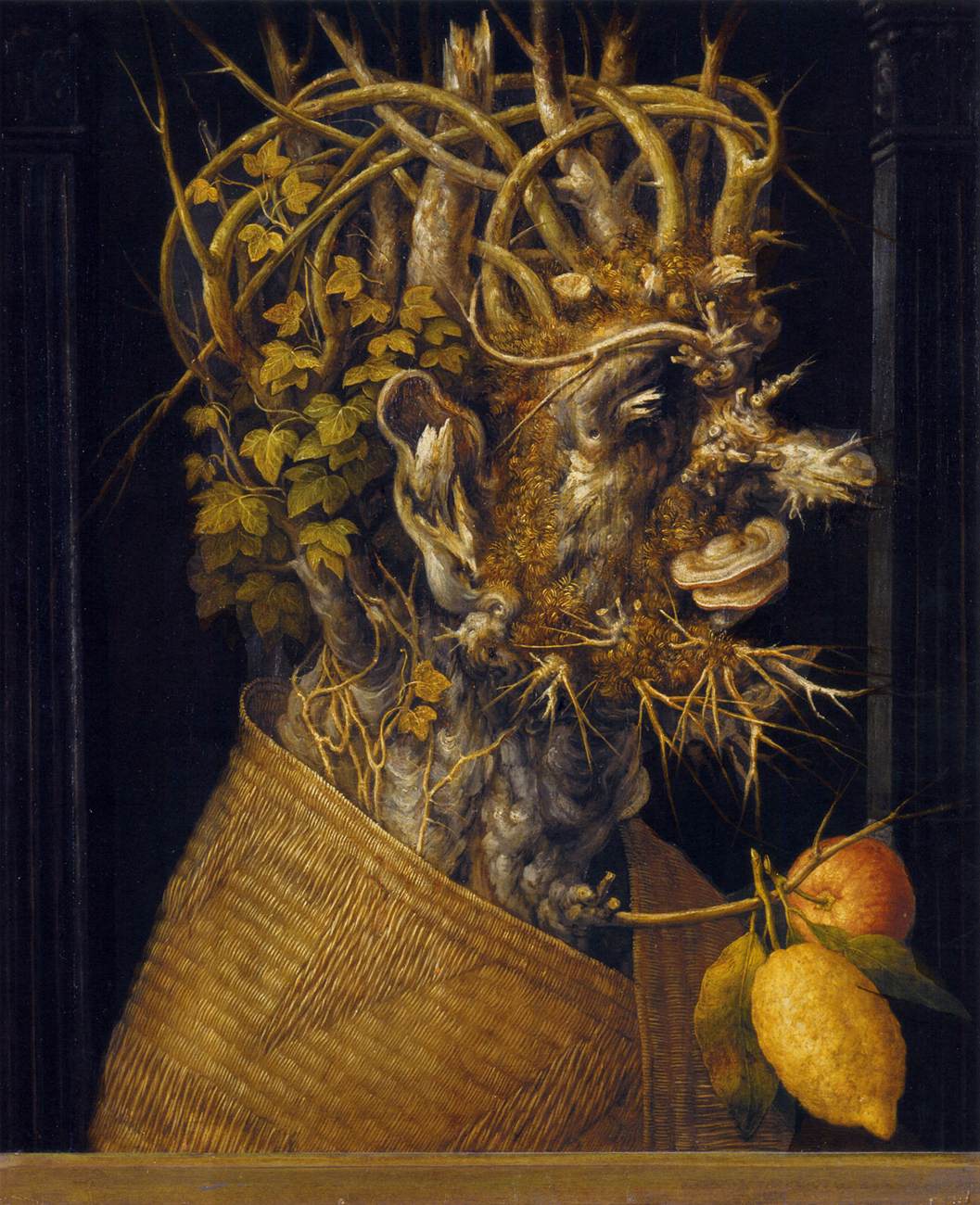 The Librarian by Giuseppe Arcimboldo

Today is the anniversary of the birth of the Mannerist painter Giuseppe Arcimboldo (1527-1593), so this week’s picture is one of his ingenious “composite heads”, the so-called Librarian. The picture of a man composed entirely from books and the paraphernalia of reading, the work is traditionally said to represent Wolfgang Lazius, the librarian of Arcimboldo’s Habsburg patron, Maximilian II. Its date is uncertain but the work was probably painted some time between 1562 and 1570. It originally hung in the Kunstkammer of Maximilian, then that of his son Rudolf II, in their castle in Prague, and subsequently passed to their decsendants. Many of Arcimboldo’s works were destroyed when Prague was sacked by a Swedish army in 1648, but The Librarian survived, taken as the booty of war. It is still in Sweden today and can be seen at the museum of Skokloster Slott, near Stockholm. [Check location of SS; is it near Stockholm?

Partly because so much of his work was lost during the sack of Prague, Arcimboldo’s reputation fell into obscurity until the twentieth century. He was rediscovered in the 1930s, when painters including Salvador Dali and museum directors such as Alfred Barr, influential founder of the Museum of Modern Art in New York, saw in his work a fascinating prefiguration of the self-consciously irrational fantasies of Surrealism. Subsequent scholarship has demonstrated, however, that Arcimboldo was anything but a proto-Surrealist, and has shown the links between his work and the often arcane symbolic cast of thought of late Renaissance humanists.

Arcimboldo’s fantasies were preeminent examples of human skill, almost outrageously clever demonstrations of the ingenuity of man designed to entertain with their extravagant wit and artifice. They spring from the same culture that enjoyed the intricate mise-en-scenes cunningly created from shells in the gardens and grottoes of princely Renaissance patrons. They may partly have been inspired by the sculptural creations of late Renaissance courtly cuisine which graced the banqueting tables of the sixteenth century – they certainly resemble existing descriptions of the extravagant sculptural creations of Renaissance chefs, known for arranging fruit and fish and other delicacies into cunning representations of mythical and other figures.

The meaning of Arcimboldo’s works was inseparable from the context for which they were designed. The Kunstkammer of the Habsburg rulers in Prague was a suite of rooms containing the royal collections of art and other objects – in effect a prototype of the modern musuem, although its principles of organisation were somewhat different. The collection built up by Maximilian II and his son Rudolf II contained not only pictures and sculptures but also all kinds of natural “wonders” and curiosities, such as shells from the Indies and horns of the narwhal, bought and sold at the time as unicorn’s horns. A repository of miracles of nature as well as the most ingenious works of man, the Kunstkammer was in toto a demonstration of the Holy Roman Emperor’s mastery of all facets of the known world, the visible embodiment of his all-encompassing power and wisdom.

A complimentary intention almost certainly lurks behind the painting reproduced on this page. It is an appropriately bookish portrait of the Emperor’s librarian, and might be said to represent an extreme, fantastical extension of the well established Renaissance tradition of depicting an individual surrounded by the particular attributes of his profession, or the visible symbols of his role in life. Here those attributes have assumed a life of their own, actually coalescing to form the portrait of the individual in question. His hair is shaped by the open pages of a book; his nose by a book’s spine; his eyes by spectacles; and his beard and moustache by the bunched tails of several pine martens – commonly used by Renaissance librarians to wipe the dust from ancient vellum manuscripts.

The compliment to Maximilian concealed within the wit of the picture presumably takes the form of a comment on the marvellously compendious nature of the book collection that formed part of his Kunstkammer. But perhaps there is another dimension to the picture’s meaning too. The late Renaissance, which saw an unprecedented expansion of human enquiry coupled with a huge publishing boom, marks that period in human history when it became clear that no single individual could master the sum of human knowledge – when libraries, rather than single individuals, came to be seen as the only true embodiments of human wisdom. Arcimboldo’s portrait seems to me to allude to this. In an earlier period, the ideal scholar was represented by a particular human being: St Jerome, say, or Erasmus. Now scholarship has gone beyond any one personality and mutated to the form of the ideal library instead – a depersonalisation of knowledge, or a reification of it, which this strange and slightly unsettling painting seems perfectly to encapsulate.