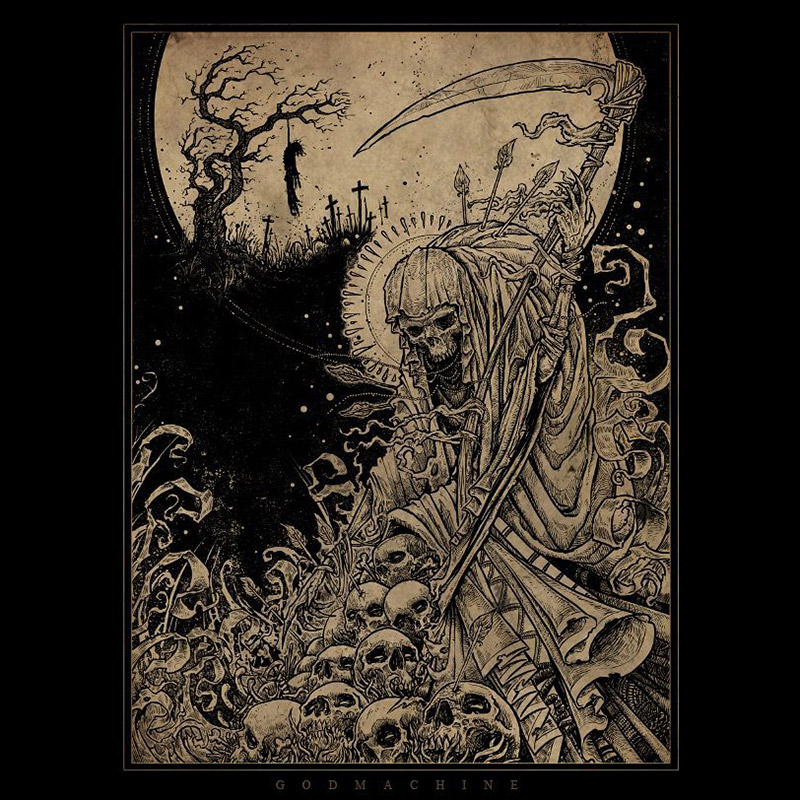 I have had some education in graphic design and film. Mostly it comes from sitting alone for days on end in a dark room. I put my drawings up online for people to see and was hired. A site called ’emptees’ years ago helped spread my art. The Wacom is about 20 years old and the computer is made from dead robots. I actually have a friend who fixes it all for me as I know nothing about computers. Sometimes the band has a set brief and if I can’t work with it I suggest other artists I think will be better at the job… free art direction! Sometimes we work on something together, sometimes I can do my own thing. Whatever it takes to make the job move as quickly and as fun as possible. I think art, music, cooking, dance, film, etc. all have one thing in common… there is always someone stood alone in a room thinking “Nah fuck you”.

I love symbols… but to me there are not symbolism; they may lend from the dark arts, religion, science… but in the drawing, they mean nothing other than aesthetics, unless the brief calls for it. I personally have no beliefs.

I try and soak up inspiration from anywhere, fashion, photography, bikes, smut, beer, comics, tattoos… I find that anything can set my mind in motion to build on a small idea. I use Tumblr mostly because people post such random stuff.

I like comic book artists at the moment, I am finding a way to draw faster with more confidence and less structure. If I could draw three lines and make it as powerful as 3 million, then I would have mastered it. That will never happen haha.

I just did the London Tattoo Convention and it was so nice to meet real people in real meat-space. I hope to do more.

“Stop thinking about what others think, find your own corner of hell and get busy working”
– Mike Patton