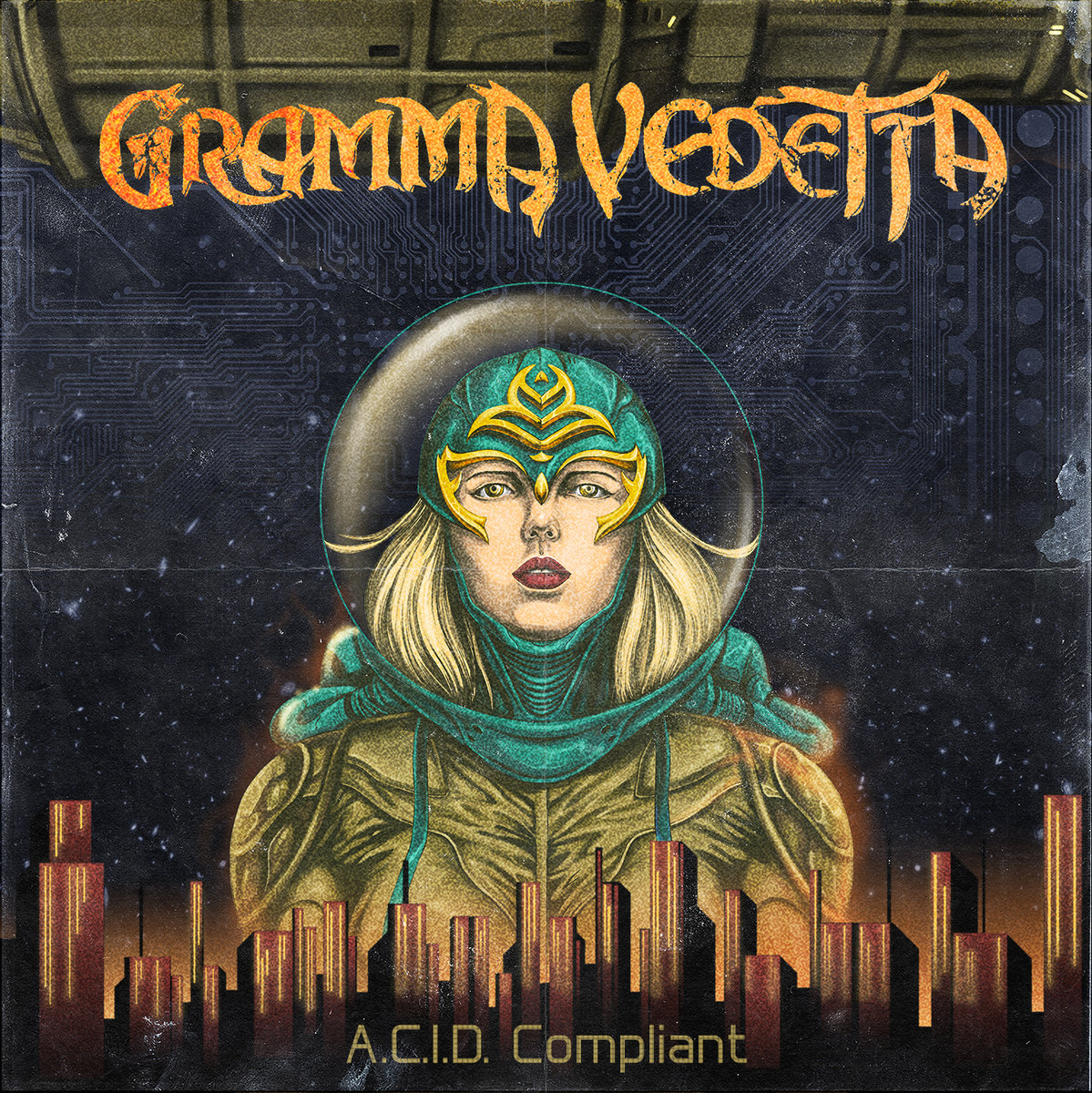 Formed in 2017 in South London, Gramma Vedetta is a three-piece hard rock outfit, fusing a no-nonsense attitude with a passion for sci-fi and colossal riffs. Their united passion for bands like Black Sabbath, Led Zeppelin and Monster Magnet and for Science fiction fueled their releases since the early days. Their music has been covered and praised by several specialised media outlets (metal injection, power play, ghost cult, V13) and it has been aired by HRH Radio, Gimme Radio and other radios worldwide. They had the pleasure to tour the UK and Italy where they captured the audience with their raw hard rock energy and heartfelt lyrics. They are currently writing the songs for their first full length, which will follow the latest EP ‘A.C.I.D Compliant’.

The concept behind the name Gramma Vedetta dates back several years before the band was born. The idea came after seeing that in whatever small city or town I visited, I couldn’t help but notice the curious phenomenon of the presence of not young any more women looking out the windows. And I imagined them as lookouts sent by a superior alien race to patrol the world and balance the good and evil. Got this funny association with old women (Gramma as Grandma) and Lookouts (Vedetta in Italian) that sounded cool so I chose to use it as the name of a band. Gramma Vedetta is the name of the starship that deploys these agents around the universe.

A.C.I.D. is an acronym used in computer science and refers to databases. When a data modification occurs in a single, consistent operation called, we define it as ‘A.C.I.D. Compliant’ and it takes the name of “transaction”. You can clearly define the state of your data before and after a transaction. We feel this album has the same properties: it is a short single, well defined and atomic, operation in the history of Gramma Vedetta that defines few changes from the debut album. (Change of a drummer, little changes on the sounds). On a second level, giving a data-centred title to the album was really appropriate for these times we live in, a time where who controls the data controls the world.

We’ve been raised listening to the heavy sounds and experimentations of the 70s (bands like Black Sabbath, Rush, Led Zeppelin), the energy and anger of the 80s/90s Thrash Metal (Megadeth and Metallica) and the explosion of heavy melodies and fuzzy sounds of the Grunge and Stoner in the 90s. (Soundgarden, Alice In Chains, Kyuss, Monster Magnet). In the new album, we revisited some of the features typical of the music of the 70s. like strong guitar riffing and singable melodies. We’ve also added some bits of analogue synthesisers: they are just part of the background but they give the songs a nice touch.

We don’t think of our music as a true stoner/doom, but we can say that we definitely grab lots of the sounds of these genres (heaviness, low tuning, riff-oriented songs), because we love them! What we like the most is that below their surface lies a large quantity of different styles. At the same time, we appreciated the effort the bands put on artworks to give their audience a full and unique experience of their style.

Lyrics explore and analyse daily life experiences (personal or seen as the third person) and all the struggles and rewards we face as human beings. I use a lot of metaphors and most of the time set the stories in a context which might not belong to reality which is fun and gives me room for being creative. I like to describe things in a completely different way of what they really are.

In our music, we’re not into magic, witches and sorcerers. We’re more on technology, space and time travels, artificial intelligence, dystopia and futurism. But, in my opinion, the use of technology to bend the world for the will of the few is considered ‘Dark Arts’ to. Let’s think about the Cambridge Analytica scandal about the misuse of Facebook Data for controlling election. This is not magic, but it’s definitely a big power used for the wrong reason.

Our artworks have been set in the context of space travels and alien races since the beginning. Proof of Concept artwork (which I made) was a view of the Pillars of Creation as seen from a starship’s window. The cover of ‘A.C.I.D Compliant’ represents the band Mascotte (she doesn’t have a name yet) which is a member of the Gramma Vedetta crew. She’s overlooking a city where the deployment of the agents is starting. The artist who drew it is Anditya Dita (Poison Project), a talented illustrator from Indonesia I’ve found on Facebook. I’ve briefed him with a sketch I drew by myself and he did a wonderful job. He already worked with us designing our t-shirt according to my specs and he did a great job there too.