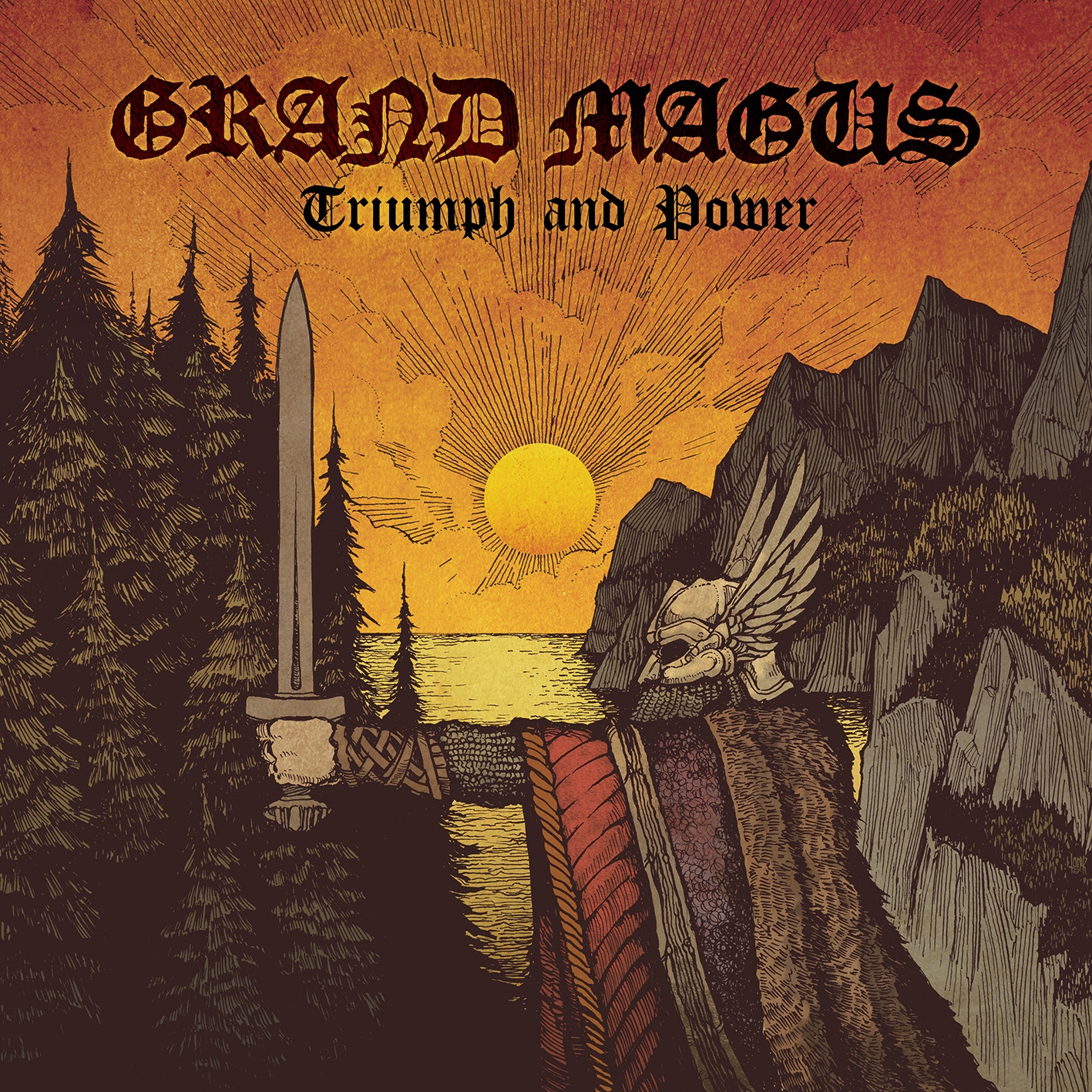 Triumph and Power, the Scandinavian way

Since their debut self-titled album in 2001, Grand Magus have continued to deliver new records every couple of years and making their name known more and more in the metal community. Inspired by Icelandic folklore and legends and influenced by bands such as Manowar this trio of musicians have released their seventh studio album “Triumph and Power”. I caught up with the lead singer and guitarist Janne “JB” Christofferson during the UK leg of the Behemoth tour to discuss their music, their creative process, believes and future plans.

HMA:  You have a new record out, “Triumph of the Power”, can you tell me a bit about it and how has the response been so far?

Grand Magus: The album was released in January, this year. As far as I can tell, it’s our biggest album yet. The fan response has been great. It was really a pleasant album to make, you know. Everything just worked and fell into place, you know. So it’s good.

HMA: How did you choose your name, is that an Aleister Crowley reference, and tribute?

Grand Magus: Yes, definitely from Crowley. The things have changed over the years, you know. When we started, back in ninety-eight, ninety-nine, I was pretty much into stuff like that back then. There wasn’t, you know. Nowadays everyone knows about stuff like this. You have this whole so-called occult thing going on, you know. So we dropped that really early on and went into the, you know, the Scandinavian Viking thing pretty early.

HMA: So you started with the Crowley’s magic?

Grand Magus: Yeah, kind of, but for me, it was really, you know the ritual magic thing was really something that was very closely connected to the ideas in the Scandinavian tradition as well. Because it’s about self-development, you know. So it’s basically the same thing. But then we stopped talking about, you know, magic and stuff like that.

HMA: About your artwork, are you involved with the album covers process? Do you give direction to your artist? And do you use the same artist?

Grand Magus: No. This latest album, the artwork was done by a guy called Anthony Roberts. It’s the first time we’ve used him. I just feel that we should have used him earlier; because I’m really happy with the way it turned out. Yeah. Yes, we are, I mean we are very involved in that sense that we always have final say in what we use, you know? We have ideas about what we’re using, but we also give a lot of freedom to the artists that we work with.

HMA: Do you give him your songs before they’re actually released so he can get inspiration for the artwork?

Grand Magus: No, but definitely a title, you know. So Anthony had the title before he did the artwork, you know, for the album. I don’t think he heard all the songs before it. Yeah, but you know the artwork has to be done before the records are done. You can’t record a record, and then have someone do the artwork. Everything has to be prepared in advance because otherwise the schedule gets completely fucked up.

HMA: Your songs and albums titles seem to have a very epic and fantasy theme.

Grand Magus: We are not going the Tolkien way; we’re going the way of song. Tolkien was very inspired by the Scandinavian tradition but of course, there are similarities. It’s just that, in the Scandinavian tradition, a lot of the poetry and the things that have been recorded through rune stones and everything deal with big things, they deal with life and death, and they deal with the idea that you, what you do. You know like in Gladiator, what you do in life resonates in eternity, you know.

HMA: As this is your personal destiny Wyrd intertwined with the Wyrd of the universe as per Scandinavian, Icelandic tradition?

Grand Magus: Not really, the idea for the Wyrd It’s more important, but it’s very important how people speak about you when you’re gone. So these are big things, it’s not just going through life like you don’t care.

HMA: Where do you get your musical inspiration for the lyrics?

Grand Magus: It’s very intuitive with the lyrics, you know. It’s hard to pinpoint exactly what it’s about. It’s not … It’s very seldom that, I feel that I have to say something and I want to preach it to the people. It’s more emotional than that. So it’s more, it’s more personal I would say, it’s not politics.

HMA: Is what you wanted to achieve with Grand Magus being reached so far?

HMA: Do you have any goals now? Is there something that you want to do, and to achieve in say two or three years or you just go with the flow?

Grand Magus: I think we’re very much a band that takes every day, each day. We don’t have any plans like you know, in three years we’re going to do this or something like that. Because, and that’s also one thing that has to do with the philosophy with what I talked about earlier, is that there’s no guarantee that there’s going to be a tomorrow, we could all die now. So there’s no point in planning too far ahead, you know?

HMA: So you just take everything day by day?

Grand Magus: Yeah, I try to. Sometimes you think about things too much, that is going to happen in the future, but normally I’m very much day by day type of person.

HMA: Without too much planning ahead then, what is next in line for Grand Magus, are you still touring after the Behemoth tour? And are you going to play at any festivals this summer?

Grand Magus: We’re doing only five dates now with Behemoth, so we do these five gigs, and we go home. Then we have one last gig this year in Germany. During the summer we normally play between, let’s say eight to ten festivals, in Europe. I’m sure it’s going to be the same next summer. We have one confirmed so far, I don’t remember which one.

HMA: You are now playing with Behemoth, which other big bands you wish you could tour with?

HMA: That would be interesting, I can totally see that. Is Manowar one of your biggest, like musical, like inspirations?

HMA: We have no more time left. Thank you so much for the interview

Grand Magus: Thank you, my pleasure.