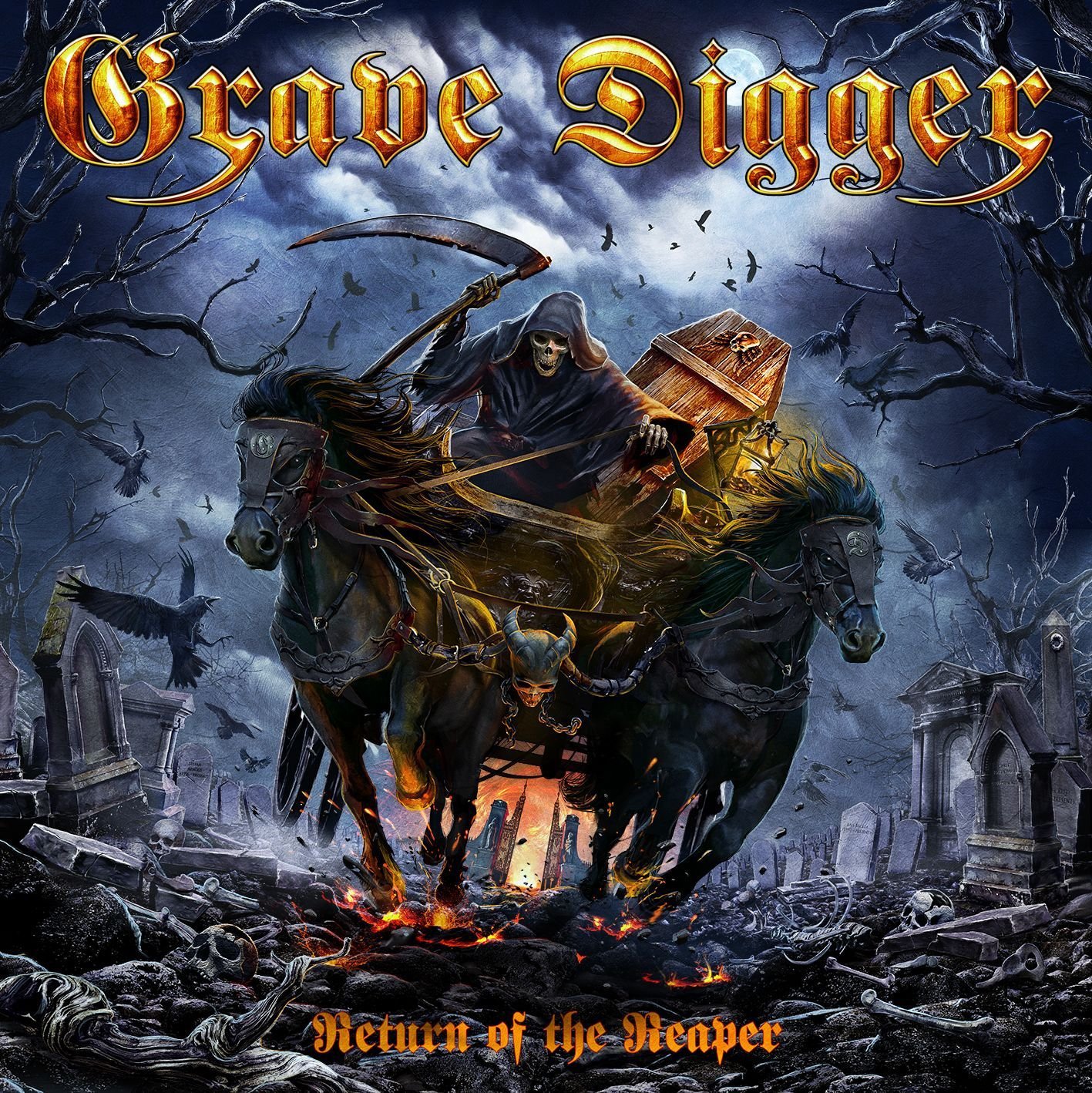 Don’t fear the Return of the Reaper

Metal scene in Germany has kept its strength since the early 80’s with many big bands flying the flag. Not all of those who started the scene are still among us but some are. One of those survivors is Grave Digger who started their pounding metal journey from the northern part of Ruhr area in Germany and have managed to have kept their original sound to this day. With many lineup changes, numerous albums and intriguing album art they are once again here with their 17th album so far ‘Return of the Reaper’. HeavyMetalArtwork got the pleasure to meet the shredder Axel “Ironfinger” Ritt to ask a few question about the past, present and future.

HMA: What can we expect from the new album “Return of the Reaper”? “Season of the Witch” already is very promising!

Axel “Ironfinger” Ritt: Well, we nailed the new album on tape like we did in the early days of metal, a three-piece-band of guitar, bass and drums, a powerful vocalist and only a few keyboards to fill the gaps, that’s how it should be. Very straight, very raw but performed as perfect as it could be.

HMA: Was the writing process as usual or did you do something different?

AR: We thought that the concept album area has come to an end and we wanted to turn back to the roots of GRAVE DIGGER, started with songs and sounds in the way how it all began. Of course, the sound and the production is a way lot better now than in those days, but the structure of the new album is pure heavy metal like in the early days.

HMA: How do you work with Guyla? Do you give him total artistic freedom or do you have a tight concept and vision for him to follow?

AR: First Chris tells him a raw idea what it is all about, the concept and the content of the songs. Then Guyla is doing the first draw and send it back. Then Chris shows it to the band, we all give our comments, he tells Guyla and the process starts over again. It takes about 6-8 versions until the final artwork has been finished.

HMA: You are from Germany, a country knew from its metal culture and you were among the first ones to start the whole movement there. How’s the scene today and how does it work for Grave Digger? Are there many younger bands following your footsteps?

AR: Well, a lot has changed in the last years in the music scene. All youngsters want to play an instrument, but there aims are more like performing in front of their PC to upload a video to YouTube, not enter a real stage and make a lot of noise like we did in the early days. A very few will make their way, but most of them are scared to death when I tell them that it takes about 10 years of daily practice, if your instrument is gonna do what you want it to do.

HMA: What advice would you give to younger metalheads starting their band nowadays?

AR: If you really, really want it, no matter how much it hurts and no matter what you all have to give up, you’re gonna make it someday. If you didn’t make it, there was something more important in life to you.

HMA: Besides digital technology what are the main changes compared to the music scene in the ’80s?

AR: To be honest, it’s not harder to break through these days, it’s IMPOSSIBLE! Music is stronger than ever related to our lives, but as a newcomer, you can’t earn money in business anymore, most of the bands are even losing money with the band. The distribution of music via Spotify and Deezer, for example, is great for the customer, but legal burglary for the artist. When you are a young guy, you can live this life as a single person for a few years, but you will never be able to feed a family by performing your own songs in a band. Very sad, but true, we are the last mohawks who are able to live on their music…

HMA: What is the story of the Reaper character on your album covers and promo photos?

AR: He’s our mascot, the optical part of our music; he’ll stay with us until the very end!

HMA: What are your personal favourites Grave Digger albums?

HMA: Could you give some personal comments from some of Grave Digger’s album covers?

AR: “Witchhunter” the very early days, classical, but today we would do something different.
The Reaper our mascot came to the band’s life
The Last Supper pretty dark, but also impressing
Ballads Of A Hangman the actual way of the Grave Digger album cover artwork followed until today

HMA: How important a good album cover is for a band?

AR: Very important! Nobody will listen to your music if the cover didn’t get him.

HMA: Where are the craziest Grave Digger fans in the world?

AR: you can’t tell exactly, but the more you go to the South, the more the fans get crazy 😉

HMA: Do you have any special moments from your tours? Or any Spinal Tap situations?

AR: Every Grave Digger show is Spinal Tap indeed and we do have a British Tour manager and FOH sound engineer, which makes it even more Spinal Tap.

HMA: What goals do you still have as a band?

AR: Performing at Rock-In-Rio and doing a tour in Australia.