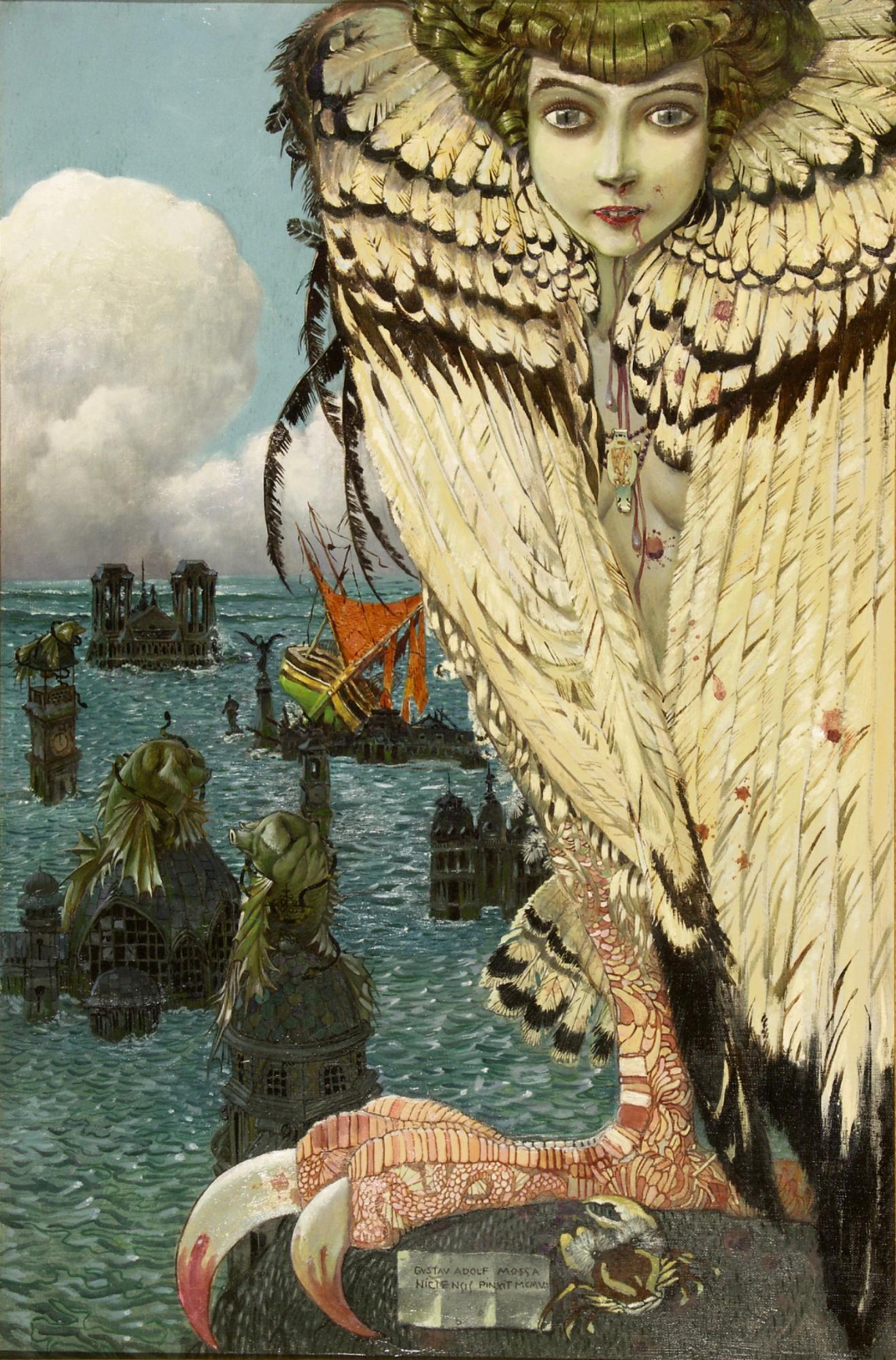 Gustav-Adolf Mossa was born in Nice on 28th January 1883. His father Alexis Mossa (1844-1926), was himself a painter from Nice who produced many posters for the Carnival of Nice at the end of the 19th century and would strongly influence the career of his son. Up to 1900, Gustav-Adolf studied at l’École des Arts Décoratifs de Nice where he familiarised himself with Art Nouveau. At the same time, his father introduced him to landscape art, the use of watercolours, and the surroundings of Nice, thus enabling him to develop a pictorial technique. As early as 1900, however, after the visit of the universal exposition, he was taken by the Symbolist movement and Art Nouveau.

In 1901, Mossa created his first major Symbolist canvas: Salomé or the Beginning of Christianity. Also at this time he undertook a series of trips to Italy in company of his father, where he visited Genoa, Pisa, Siena and especially Florence. It is also at this time that, in the tradition of his father, he produced his first works for the carnival in Nice. At the end of 1902, Gustav-Adolf Mossa returned to Nice where he submitted his works to the Carnival competition. In 1903, he returned to Italy with his father, visiting Mantua, Padua and Venice. 1904 to 1911 was a particularly productive period; his output included Symbolist paintings, carnival scenes, watercolour landscapes, plus poems and plays. In 1908, he married Charlotte-Andrée Naudin. In 1911, he discovered Flemish primitive art and abandoned symbolism.

In 1914, during the First World War, Mossa was mobilised and gravely injured. Drawing from this experience of war, he went on to produce a canvas that he completed in 1916: The Sad Hours of the War. He divorced in 1918 and the following year his mother died. His work on landscapes, illustrations and manuscripts continued, but with a lot less than intensity. He remarries in 1925 with Lucrèce Roux, who remained his wife until her death in 1955. After the death of his father in 1926, Gustav-Adolf Mossa took his place as curator of the Musée des Beaux-Arts de Nice. After the death of his second wife, he married for a third time in 1926, to Marie-Marcelle Butteli, who Mossa renamed Violette.

Only after Gustav-Adolf Mossa died in Nice on 25th May 1971, was his Symbolist work rediscovered. It had been kept concealed by Mossa from a public that had known him essentially by his work as a printmaker for the Carnival of Nice.