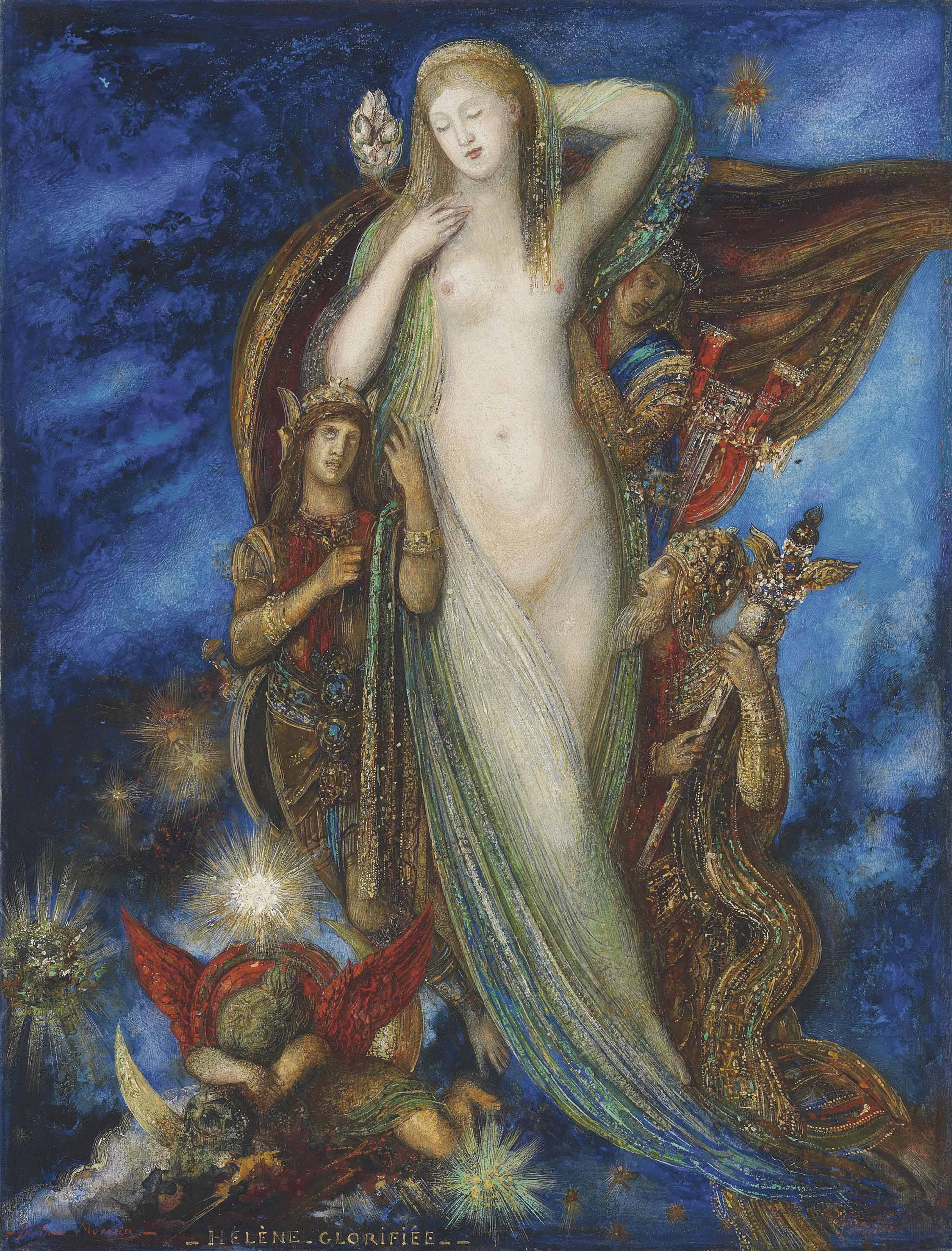 Although threatened by the fleeting truths of modern experience that artists like Manet, Degas, or Monet elected to paint, classical mythology, like a proper education in Greek and Latin, remained a cornerstone of nineteenth-century art and culture, propagated by the academies and illustrated in countless official paintings. It was also subject to intensely personal, even perverse interpretations that could use ancient legends to trigger voyages during which the cold marble facts of ancient sculpture, venerated and slavishly copied in the art schools, would evaporate into the strangest mists. So it was with Gustave Moreau’s odd visions of antiquity, opium dreams of his own invention. His Orpheus of 1865, when shown at the Salon the following year, needed the artist’s own verbal explanation in the catalogue to clarify his deviation from more orthodox depictions of the legend.

The inventor of music so beautiful it could charm man and beast, Orpheus had met a gruesome end when he was torn to pieces by the enraged women of Thrace (whose love he had rejected), his head and lyre thrown into a stream. This ferocious group murder could, in fact, be seen at the same Salon of 1866 in a painting by Emile Levy. But Moreau imagined instead a later moment of erotic contemplation rather than one of overt physical violence, conjuring up a “young girl who reverently recovers Orpheus’s head and lyre.” In Moreau’s painting, this Thracian maiden now stares as if hypnotized by her strange captive, a disembodied head fused with the musical instrument he played as he sang. Seen through a misty scrim of twilight tones, this morbid vision wafts us off to what the dean of Surrealism, Andre Breton, would later admire as a “somnambulistic world.”

Indeed, Moreau might well be credited as a pioneer in the opening of hazy, disquieting vistas that could begin to plumb the depths of that subconscious fantasy life so prominent in the art and thought of the twentieth century. Supported by a study of Leonardo’s otherworldly landscapes of distant waters and strange, almost translucent grottoes, Moreau invented a magical environment where we are not surprised to find bizarre shifts in size (the piping shepherds on the rocks above) or even a pair of what look like prehistoric tortoises in the right foreground, probably an allusion to the myth that their shells were used in the invention of the lyre.

Though partly prophesied by Chasseriau and partly shared by such contemporaries as Burne-Jones and Puvis de Chavannes, Moreau’s floating world of cultivated inward sensation and fantasy was remarkably precocious, a voice in the wilderness that announced the more concerted explorations of morbid, inward reverie found in the Symbolist domain of the 1890s. By the end of the century, a vast international repertory of drugged silence, introspective mythmaking, decapitated heads, and demonic women could trace its ancestry back to Moreau’s first hallucinatory paintings of the 1860s.

From: Robert Rosenblum, “Paintings in the Musee D’orsay”