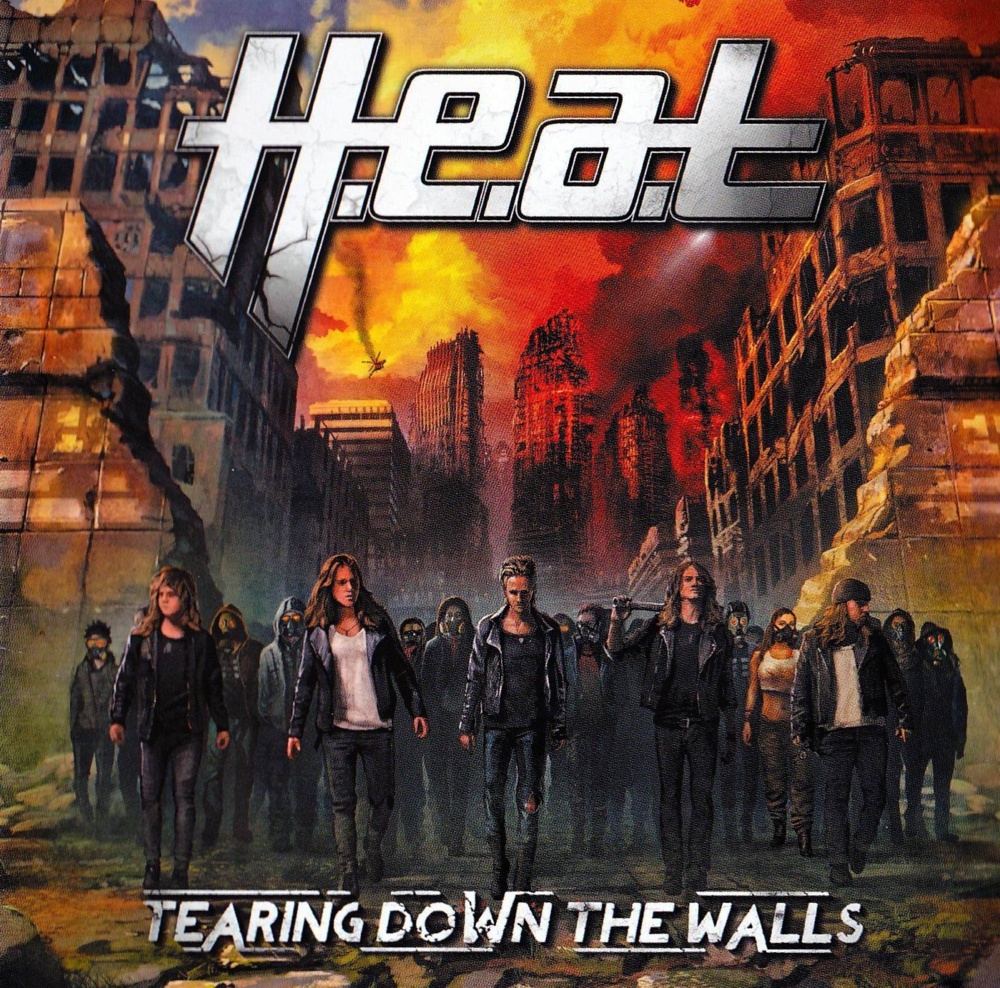 Swedish rockers raise temperature to a million degrees at this year’s Download Festival!

In a blaze of golden light, stage smoke and to the music of one of rock’n’roll’s truly legendary bands, KISS, yet another Download Festival has come to a thunderous and epic conclusion. I can only presume that this year will leave a mark in the hearts of everyone who took to the muddy fields at Donnington to celebrate life, summer and music. On the last day of the festival, Swedish hotshot melodic rockers, H.E.A.T. ascended the stage at noon. By the time they were done with their all too brief set, the crowds were cheering and chanting for more. Armed with energy and skill, H.E.A.T. has toured all over the world and have shared the stage with bands and performers such as Toto, Scorpions and Alice Cooper. Beneath the shelter of the Download press area, after little success finding some free beer, frontman Erik Grönwall, guitarist Eric Rivers, and yours truly had a chat about the festival and the band.

Andy (HMA): This is Andy for HMA, straight from Download Festival! I’m here with Erik Grönwall and Eric Rivers from H.E.A.T.! How are you enjoying Download, guys?

Erik Grönwall: It’s awesome. Always a pleasure to be here. We played Download once in 2011. This was more fun. It was a bigger stage and there were more people in the audience. It’s a rock fest. What’s not to enjoy?

Andy (HMA): Do you guys ever find it difficult fitting all the songs you want to play in such a constrained time slot?

Eric Rivers: Oh yeah, especially today. 25 minutes and we only played six songs. We just went for the crowd pleasers.

Andy (HMA): What are the best and the worst things about playing a festival like this?

Erik Grönwall: Well, you don’t have as much time on stage as you want. When we play a headline show we play for 90 minutes and when the vibe is good you always want to play more.

Eric Rivers: I’d say the best thing is you have a lot to prove as a band. You can win over a lot of new fans and you really have to perform well.

Andy (HMA): Your last album, ‘Tear Down the Walls’ came out last year. Can we expect another one in 2016?

Eric Rivers: Maybe. We’re going to try and do something new this time around. We recorded the last two albums in the same studio and kind of want to try something different. Maybe release a few new songs online. A couple of EPs instead of an entire studio album.

Andy (HMA): Are you still doing to be working with producer Tobias Lindell?

Andy (HMA): What’s he brought to the band?

Eric Rivers: He just makes us sound good and I think he has an easy going attitude. He doesn’t believe in spending 16 hours working on a guitar solo. The first take is the best to take most of the time and it doesn’t have to sound perfect. Music is more about feeling than sound.

Erik Grönwall: He also taught us how to drink. [Laughs]

Andy (HMA): Does that improve the songwriting?

Erik Grönwall:    It doesn’t help with the studio time! [Laughs] I think Tobias brings a very relaxed feeling to the process, so we can enjoy recording.

Andy (HMA):    Speaking of songwriting… How would you say that your style has changed from the first album until now?

Erik Grönwall:    I think it’s more about live performances now. We’re trying to make songs that’ll sound good live. In the beginning, it was more of a studio thing. Trying to make everything sound perfect and making songs that people listen to on their headphones. Now it’s about playing with more authentic energy so people can enjoy it at a show basically.

Andy (HMA): So you go for a cleaner sound rather than emphasizing on post-production and effects?

Eric Rivers: I think so. I want us to be more like a garage band and be good performers. Not do too much in a studio. You want to hear the real band on an album. That’s what we’re trying to do.

Andy (HMA): What song do you feel like the crowd responded to the most today?

Eric Rivers: ‘A Shot at Redemption’. It’s been on the radio in the UK. It’s an easy song to learn and sing along to.

Andy (HMA): Are you guys going to play in the UK soon?

Erik Grönwall:    We hope so. We have a lot of festivals coming up. We’re playing Brass Pump next week and we’re going to keep doing festivals. Hopefully, we’ll be back in the UK but I think we might write new songs first.

Andy (HMA):    Are you going to see any other bands today?

Erik Grönwall: Yeah we’re going to see KISS and In Flames. I think Backyard Babe is on now.

Andy (HMA): They finished their set. I just came from the show.

Erik Grönwall: Oh really? They finished? How was it?

Andy (HMA): They were great as always.

Erik Grönwall: We saw them a week ago.

Andy (HMA): So tell me, when are you guys are not being musicians, what do you enjoy doing?

Andy (HMA): I was in Finland when they beat Sweden. It was crazy. Sweden has a great team though.

Eric Rivers: We do but Finland…. We always do badly against Finland.

Andy (HMA):    How about the Canadians? How do you measure them as a hockey team?

Erik Grönwall:    They’re the best. It’s like ridiculous how good they are. They have the best team available. No one has a chance.

Andy (HMA): What do you guys want to do that you haven’t had the chance to do yet?

Eric Rivers: Open up for KISS

Eric Rivers: We just talked about this yesterday…. How we should write and record the new album. Personally, I would just like to be in rehearsal and write songs together and record it that way. Just try to make it as organic-sounding as possible.

Erik Grönwall:    I saw the Foo Fighters two nights ago when David Grohl broke his leg and kept on playing. That’s one of my favourite bands. It’d be cool to play with the Foo Fighters.

Andy (HMA): Is there any question you’ve always wanted to be asked during an interview but no one’s ever asked?

Eric Rivers: Our drummer should be here.

Eric Rivers: I like to talk about instruments but no one ever asks much about those.

Andy (HMA):    That’s so weird. I always used to ask the musicians about their backline. Everyone would always be like: “Yeah, we have two guitars and a drum kit. What more do you want us to say?” Eventually, I stopped asking.

Eric Rivers: Wow! Really? Well, I have a pretty boring set up.

Eric Rivers: I do. It’s so simple. I have an Eleven Rack and it has an emulator. So I don’t even have an amp. I just use everything digitally. Same with the bass guitar! We don’t have any amps on stage which is nice for festivals. You just have your little rack with you and that’s it.

Andy (HMA):    I have another important question. Why are you guys drinking water at Download?

Erik Grönwall:    It’s the only thing around. It’s terrible. I hate it. I hate water. [Laughs]

Andy (HMA):    Guys, I’m going to have to say bye now. It was a real pleasure. Have a great time at Download and I hope to see you next time you’re in London.

Erik Grönwall: It was awesome, man. Thank you.