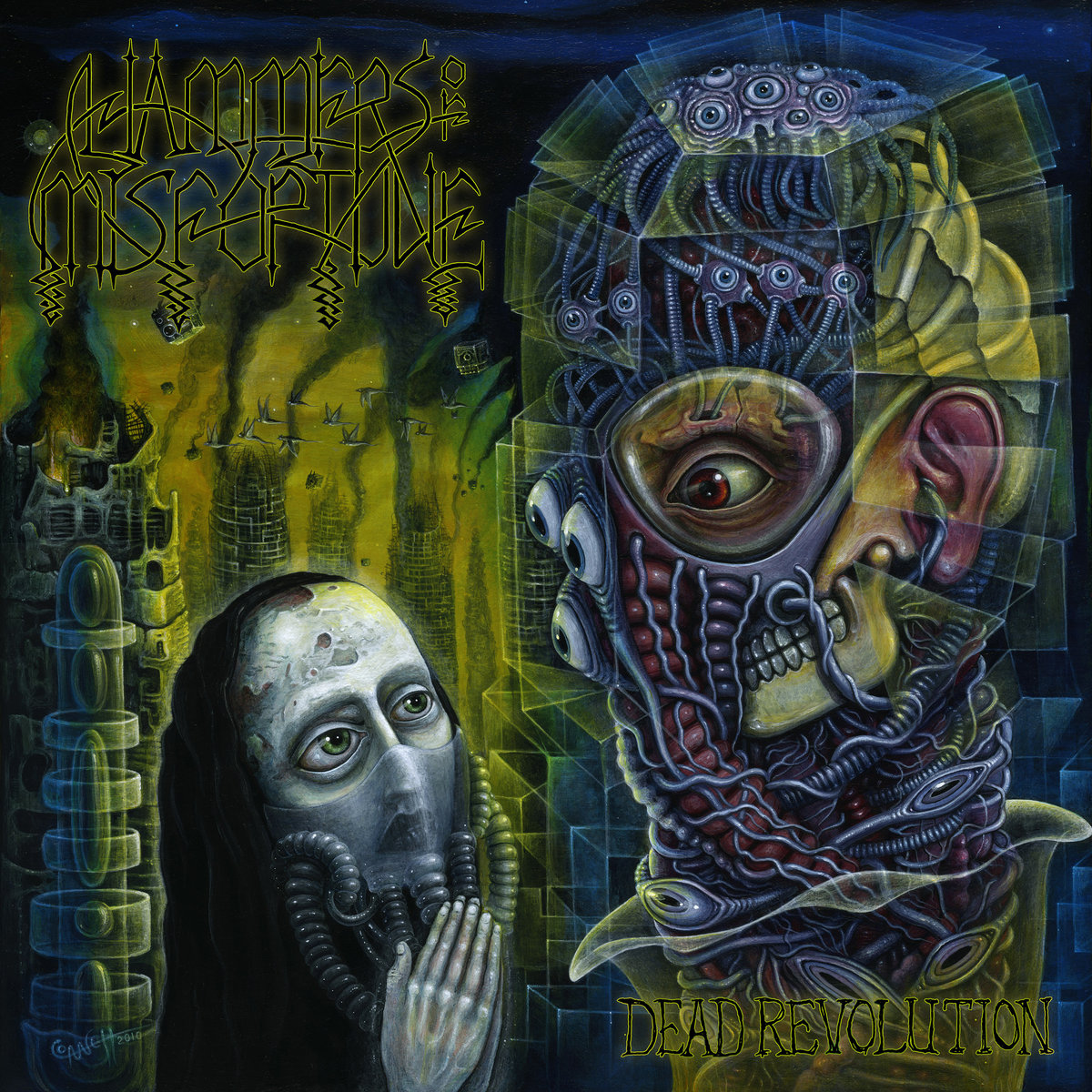 When West Coast progressive heavy metallers Hammers of Misfortune are asked what took so long to follow-up 2011’s acclaimed 17th Street, principal songwriter and guitarist John Cobbett is likely to throw out a Lennon lyric “Life is what happens to you while you’re busy making other plans. Mostly, the delay was my fault, trying to finish the cover art. Specifically, the gatefold/booklet, which is hand-drawn and hand-lettered (while holding a baby), took me a long time. Sorry! The front and back covers are by Robert Steven Connet and are beautiful. I absolutely can’t wait to hold the vinyl in my hands. Sometimes I feel like we’re too metal for the progs and too prog for the metals. A cup of coffee, a guitar and a keyboard. The riffs come easily; lyrics and arrangements are murder. Most of it comes down to making decisions, deciding what to cut out and what to keep. At least half of the music I write gets thrown away. Not very glamorous.”

HMA: First off… how was your latest album ‘Dead Revolution’ developed?

John Cobbett: Hey Alex! The album was developed the usual way; writing songs, collecting ideas, making demos, rehearsing stuff, tearing songs apart and putting them back together. We were pretty good about doing vocal pre-production this time. Joe and Leila were at my place singing on the demos and working out vocal parts ahead of time. This helped a great deal.

HMA: Does the record hold a central theme or topic?

JC: A little bit, maybe. It’s definitely not a concept album, but there are some recurring themes. As I often say, the lyrics are often about more than one thing at a time to me. I don’t like dictating too much, because people get their own messages from the lyrics. What you take away from the record is perfectly valid for you, and I don’t want to interfere with that.

I can say that I was thinking about technology and gentrification for some of it, since that’s what’s happening in my neighbourhood, but there’s much more to it than that.

HMA: Since ‘The Bastard’ released in 2001 ‘Dead Revolution’ marks the 6th release; how has the band evolved since you started?

JC: Well the obvious fact is that we’ve had a somewhat different line-up on every record, so that affects things for sure. In my opinion, the band gradually went more prog up until Fields/Church of Broken Glass and has drifted back toward metal with the last 2 albums. Of course I’m making a lot of mistakes learning how to produce albums as we go along, and hopefully getting better at it!

HMA: How do you go about writing riff, what creative ritual or inspirations do you practice?

JC: Nothing too specific, an idea can come from anywhere, any time. Often I’ll be doing the normal thing and practising the guitar, coming up with ideas. I’ll get ideas while I’m at work, or just walking around. Sometimes I’ll sit down at the piano or with an acoustic guitar. I keep ideas on file and always have extra riffs and melodies floating around. The real hard work comes with the arranging and writing lyrics…

HMA: What do you demand and require in a guitar sound?

JC: I’m not the greatest at getting guitar tones. I can’t afford to try out a million different amps, so I just work with what I have: a few amps, a few pedals and whatever is lying around the studio. Most recording studios have amps and pedals on hand, so I try all of them. A few different mics and mic placements can help a great deal, and you can try each speaker in a given cabinet to see which one sounds the best. A huge consideration is a song, or even the part. Complex, strummed chords benefit from a different setting than crunchy speed-picked riffs. On Dead Revolution, there are lots of different tones in each song. There’s no one guitar tone for the whole album. It was really trying to find the right tone for each part. As you can imagine, this got pretty complex!

HMA: How was Robert Steven Connett involved in your cover art? Also a different from your previous releases.

JC: Yes, each album cover is done by a different artist (even me, on The August Engine). I mean, each album has a different logo. We never use the same logo twice! I found R.S. Connett online, researching artists and looking at endless galleries. His work stood out to me immediately. I contacted him and we worked out a deal where I could use a few of his existing paintings for the front and back cover. I wish we could have commissioned an original work, but that would have been far, far out of our budget. The logo and the gatefold lyric sheet (with the bulldozers & lettering) I did myself.

HMA: Is there a piece of art or artist that is important to you and why?

JC: Oh yeah, I grew up obsessed with comics. I would ride my bike for miles to search through used horror comics, looking for art by Bernie Wrightson. To this day he is probably my favourite artist, along with Philippe Druillet. I’ve had the Yragaël, Urm Le Fou and Lone Sloane books since I was a kid, and they never fail to blow my mind. I have a ton of art books lying around, everything from war propaganda to a fine art like Bruegel and Bosch to Frazetta, and many, many others. I try to do some art myself, in fact when I was 12 my dream was to draw comics. Then music took over when I discovered punk rock. I never got very good, but I can try…

HMA: What has been the high point of your career?

JC: Well, I hope that has yet to come! I’m feeling pretty good right now, with Hammers and VHOL both active and putting out records. I don’t do a great deal of touring and I haven’t played many of the great festivals, but I played Roadburn twice, and that was awesome! On my first European tour with Slough Feg we ended up in the campground of Waken Open Air, I think this was in ’99 or 2000. We didn’t play, but it was my first time seeing a real metal festival. I was just blown away. In the US we can’t imagine such awesome things exist! I’m hoping we get to play some more festivals, but at the moment we don’t even have a booking agent, and I’m lousy at setting up tours and stuff like that. We are open to offers!

HMA: …And the low point?

JC: So many low points, haha! We’ve had some pretty grim tours, sleeping by the side of the road (or trying to sleep), getting ripped off by shady promoters, skinheads attacking shows, being bombarded with fireworks while trying to play, guns going off outside, getting arrested, driving across the country to play a showcase only to have the fire dept. shut down the venue when we got there. I could go on…

Thanks for the interview!