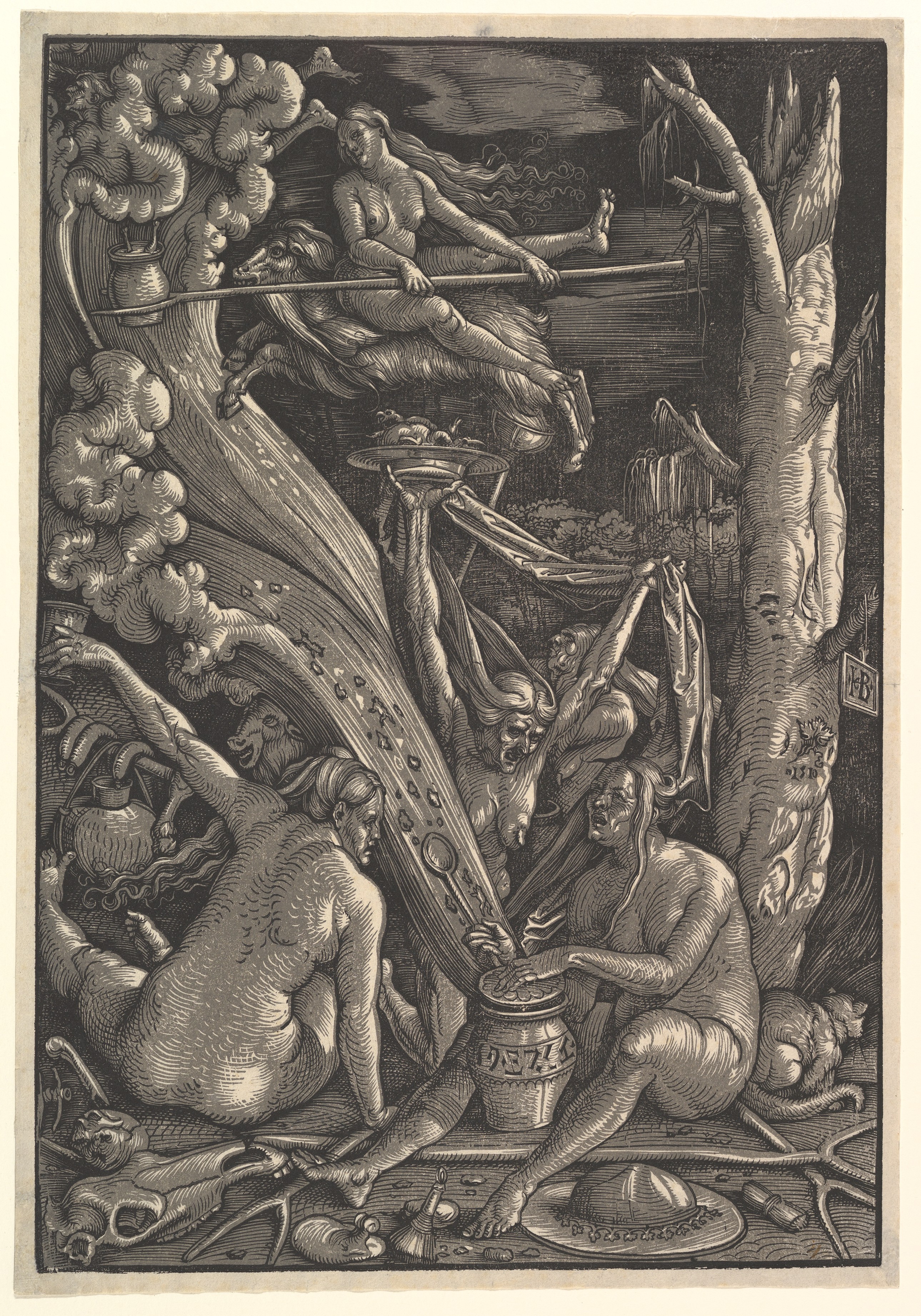 Hans Baldung was born in Swabia, Germany in the year 1484 to a family of intellectuals, academics and professionals. His father was a lawyer and his uncle was a doctor, and many other of his family members maintained professional degrees. In fact, Baldung was the first male in his family not to attend university. This made him one of the first German artists to come from a learned family. His earliest training as an artist began around 1500 in the Upper Rhineland by an artist from Strasbourg.

Beginning in 1503, Baldung was an apprentice for the most well renowned German artist of the day: Albrecht Dürer. Here, he was given his nickname “Grien.” This name foremost comes from his preference to the color green, and secondly to distinguish him from the three other Hans’ in the apprenticeship. He later included it in his monogram, and it has also been suggested that it came from “grienhals”, a German word for witch. Hans quickly picked up Dürer’s influence and style, and they became good friends. In his later trip to the Netherlands in 1521 Dürer’s diary shows that he took with him and sold prints by Baldung. On Dürer’s death Baldung was sent a lock of his hair, which suggests a close friendship. Near the end of his apprenticeship, Grien oversaw the production of stained glass, woodcuts and engravings, and therefore developed an affinity for them.

In 1509, when Baldung’s apprenticeship was complete, he moved back to Strasbourg and became a citizen there. He became the celebrity of the town, and was commissioned to make lots of art. The following year he married Margarethe Herlin, joined the guild “zur Steltz”, opened a workshop, and began signing his works with the HGB monogram that he used for the rest of his career. His style also became much more mannerist.

Throughout his life, Baldung painted numerous portraits, known for their sharp characterizations. While Dürer rigorously details his models, Baldung’s style differs by focusing more on the personality of the represented character, an abstract conception of the model’s state of mind. Baldung settled eventually in Strasbourg and then to Freiburg im Breisgau, where he executed what is known as his masterpiece. Here in painted an eleven-panel altarpiece for the Freiburg Cathedral, still intact today, depicting scenes from the life of the Virgin, including, The Annunciation, The Visitation, The Nativity, The Flight into Egypt, The Crucifixion, Four Saints and The Donators. These depictions were a large part of the artist’s greater body of work containing several renowned pieces of the Virgin.

The earliest pictures assigned to him by some are altar-pieces with the monogram H. B. interlaced, and the date of 1496, in the monastery chapel of Lichtenthal near Baden-Baden. Another early work is a portrait of the emperor Maximilian, drawn in 1501 on a leaf of a sketch-book now in the print-room at Karlsruhe. “The Martyrdom of St Sebastian and the Epiphany” (now Berlin, 1507), were painted for the market-church of Halle in Saxony.

Baldung’s prints, though Düreresque, are very individual in style, and often in subject. They show little direct Italian influence. His paintings are less important than his prints. He worked mainly in woodcut, although he made six engravings, one very fine. He joined in the fashion for chiaroscuro woodcuts, adding a tone block to a woodcut of 1510. Most of his hundreds of woodcuts were commissioned for books, as was usual at the time; his “single-leaf” woodcuts (i.e. prints not for book illustration) are fewer than 100, though no two catalogues agree as to the exact number.

Unconventional as a draughtsman, his treatment of human form is often exaggerated and eccentric (hence his linkage, in the art historical literature, with European Mannerism), whilst his ornamental style—profuse, eclectic, and akin to the self-consciously “German” strain of contemporary limewood sculptors—is equally distinctive. Though Baldung has been commonly called the Correggio of the north, his compositions are a curious medley of glaring and heterogeneous colours, in which pure black is contrasted with pale yellow, dirty grey, impure red and glowing green. Flesh is a mere glaze under which the features are indicated by lines. (1911)

His works are notable for their individualistic departure from the Renaissance composure of his model, Dürer, for the wild and fantastic strength that some of them display, and for their remarkable themes. In the field of painting, his Eve, the Serpent and Death (National Museum of Canada) shows his strengths well. There is special force in the “Death and the Maiden” panel of 1517 (Basel), in the “Weather Witches” (Frankfurt), in the monumental panels of “Adam” and “Eve” (Madrid), and in his many powerful portraits. Baldung’s most sustained effort is the altarpiece of Freiburg, where the Coronation of the Virgin, and the Twelve Apostles, the Annunciation, Visitation, Nativity and Flight into Egypt, and the Crucifixion, with portraits of donors, are executed with some of that fanciful power that Martin Schongauer bequeathed to the Swabian school.

As a portrait painter he is well known. He drew Charles V, as well as Maximilian; and his bust of Margrave Philip in the Munich Gallery tells us that he was connected with the reigning family of Baden as early as 1514. At a later period he had sittings with Margrave Christopher of Baden, Ottilia his wife, and all their children, and the picture containing these portraits is still in the gallery at Karlsruhe. Like Dürer and Cranach, Baldung supported the Protestant Reformation. He was present at the diet of Augsburg in 1518, and one of his woodcuts represents Luther in quasi-saintly guise, under the protection of (or being inspired by) the Holy Spirit, which hovers over him in the shape of a dove.