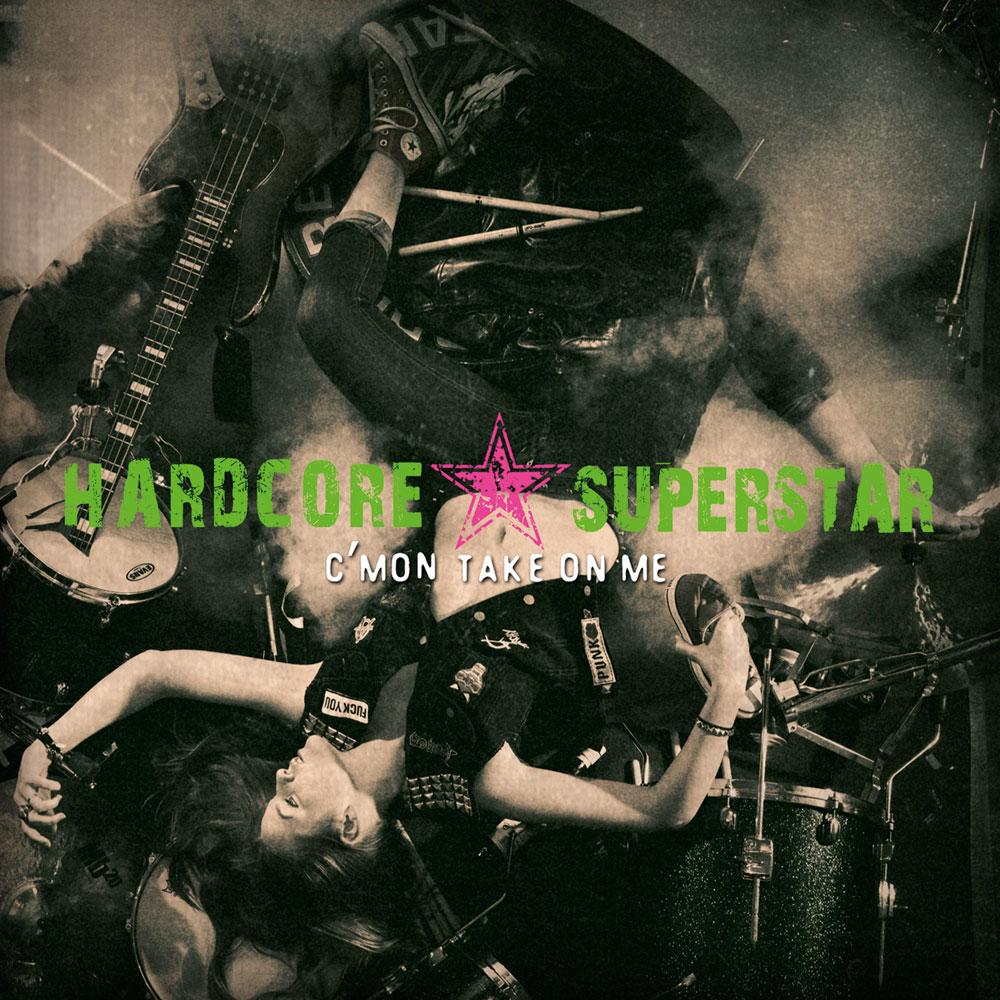 Hardcore Superstar is one of my favorite bands. Period. When I was sixteen the Swedish glam and sleaze rock scene was just taking off with bands like Crashdïet and Hardcore Superstar standing at the forefront of the whole resurgence. They were inspired by 80’s hair metal and classic glam rock but their sound was fresh, their energy was real, not an imitation. They were the soundtrack to my teenage years, a reflection of what a lot of members of my generation felt and still feel today.

A lot of bands from Scandinavia, the UK and the US were inspired by their image and how popular the Hardcore Superstar guys were among the female representatives of the rock scene, so they tried mimicking them unsuccessfully. The result was a cluster-fuck of pretty boys standing behind microphones who had the vocal talent of a bullfrog. Thankfully most of them died quick deaths and we didn’t suffer much. I digress….

Hardcore Superstar have had a prolific career. They have put nine albums out between 1998 and 2013. The latest ‘C’mon Take on Me’ was released in February and given us twelve new exciting new tracks. I sat down to a chat with the super friendly and cool Jocke Berg backstage before the band’s show in London with Buckcherry.

Andy (HMA): Hi Jocke, good to see you again. Thanks for agreeing to do this interview for Heavy Music Artwork.

Andy (HMA): Yeah and good friends of yours as far as I remember.

Jocke: Yeah we did a couple of tours together.

Jocke: Oh yeah do you mean the one with Crashdïet and Mötley Crüe?

Jocke: Oh I can’t either. Yeah that was great. We met at that bar after right?

Jocke: It’s been great! It’s been awesome. I mean it’s always a little bit tense at the beginning of the tour. I mean you know: ‘Oh touring with Buckcherry, is this really happening, what the fuck?’ But, y’know, now we’re really good friends and we talk all the time. Kelly, the bass player, is always hanging out in our dressing room, so it’s really awesome.

Andy (HMA): What is it like sharing the stage with bands like Mötley Crüe and now Buckcherry?

Jocke: It’s like…. It’s hard to describe. It’s kind of heavy when Nikki Sixx comes up to you and he says: ‘Oh you’re a great singer, man’. [Sniffles] Say it one more time, man. Say it one more time. [Laughter] I mean he’s a fucking idol! I mean we played with Aerosmith…. They’ve all been very kind to us and AC/DC were awesome to play with. It’s always fantastic.

Andy (HMA): Martin told me back in Helsinki that you guys recorded something for American Idol?

Jocke: Yeah it was Adde and Martin who did a song for James…. What’s his name? James something…. A guy who came fourth or something like that….. A song called ‘Outlaw’.

Andy (HMA): I mean you have a lot of fans in the US. Do you think you’ll be doing a US tour soon?

Jocke: Actually I asked the guys in Buckcherry: ‘Why don’t we go with you to the States and open up for you?’ They said: ‘That’d be awesome!’ So, um, we will see. I don’t know but that would be amazing.

Andy (HMA): You’ve released a lot of great albums. You’ve been in the background of every good party I’ve ever been to.

Andy (HMA): Which ones are you particularly proud of?

Andy (HMA): And so is Adde now. Last time I remember him saying he was not going to shave until his son was born. I think I saw two babies downstairs?

Jocke: Yeah that was my son, Vegas, and Bruce, Adde’s son.

Andy (HMA): What’s it like being a rock’n’roll dad and having the kids on tour?

Jocke: It’s cool. I mean they’re only here with us for two days. We’re having a great time eating and drinking, walking around with them, being a father.

Andy (HMA): Does touring leave you enough time to spend with your family?

Jocke: Yeah of course but today was a little difficult. We did an acoustic show on a radio station this afternoon. They’ll even be at tonight’s show watching us.

Andy (HMA): What’s the rock’n’roll scene look like to you? Hardcore Superstar and Crashdïet brought glam and sleaze back. What do you think about the new bands that are out there following in your footsteps?

Jocke: There are a lot of crappy new bands actually. I mean it’s like they think that if you put the clothes on you can play but you have to learn your instrument and rehearse like a motherfucker. Otherwise you can’t do a show. Doesn’t matter how good you look.

Andy (HMA): What was the recording process like for ‘C’mon Take on Me?’

Jocke: It was cool, we wrote songs for like six months and then we rented this warehouse in Gothenburg, we put our own studio gear in it. We were there for four months, we cranked out the songs and then we sent it to Randy Staub in Vancouver to mix it.

Andy (HMA): He’s mixed Mötley Crüe and a lot of other famous bands.

Jocke: Yeah. There’s a funny story about that. Randy Staub has mixed Dr. Feelgood, U2 and Bon Jovi, whatever…. And we got the first mix back on one song and it sounded so ‘American radio’! We didn’t want that. So Martin told Randy Staub: ‘No, that’s not it at all. We want to sound as good as Dr. Feelgood did.’ Randy said: ‘Oooh! I think I got that button somewhere on the board!’ [Laughter] So then he did a new one and it came out to be pretty good.

Andy (HMA): Tell me about the latest album cover. You’re sticking to the theme of girls which I have a full respect for.

Jocke: As you can see it’s like a girl who has stage dived right in the drums. On last call we always take people up on the stage to have a good time and drink some Jäger. We wanted the album to look like ‘sex and bruises’.

Andy (HMA): Tell me about how you compose your music and write your lyrics? What inspires you and how has your process evolved?

Jocke: I think we’ve become much better songwriters since the first album. I mean we all write songs for the band but sometimes it’s like…. Adde will do like eight songs on a record. If the songs are good it doesn’t matter who does what or how much. And as for lyrics, we write lyrics about people we meet on tour. I mean we meet so many crazy people on tour and that’s who the songs are usually about, with a little twist of irony of course. For ‘Above the Law’ it was a Russian guy at a pool who asked me if I was ‘above the law’. ‘Guestlist’ is about all the crazy people who try to come backstage at shows.

Andy (HMA): Which are your favorite songs to perform live?

Jocke: I like ‘Bag on Your Head’ but we don’t do that anymore. [Laughter]

Andy (HMA): ‘Last Call for Alcohol’ is a real crowd-pleaser.

Jocke: Yeah, we do that one.

Andy (HMA): I’ve noticed with your videos you stick to a very core concept: it’s you guys playing. You don’t really tell stories in your music videos.

Jocke: I think that the fans want to see the band. Not a naked girl or a love story. Not musicians being actors. For me the coolest videos are just the band playing their song.

Andy (HMA): What does your backline look like for this tour?

Jocke: We have like six Marshall Amps on each side and we have the cover of the album as a big backdrop – sex and bruises. And then it’s us. [Laughter]

Andy (HMA): What’s next for Hardcore Superstar? I know the latest album is still fresh….

Jocke: Yeah we have a couple of ideas for a new album but for now it’s touring.

Andy (HMA): So nowhere near stopping?

Jocke: [Laughter] No, no. Can’t do that, we have to save the world!

Andy (HMA): Good to hear! Last one is a double. What do you love best about music and what advice can you give young musicians?

Jocke: I love being on-stage. That’s my whole thing. I don’t like to record. That’s boring. I like to meet the fans. That’s what I’m in for. I know you have to record albums to tour but if I had to choose between the two I would choose playing live on-stage. My advice for young musicians is, like I said before: rehearse. Practice on your instrument.

Andy (HMA): Thank you for taking the time to do this interview. Have a great show tonight and good luck!

Jocke: Thank you very much, man! Good to see you!