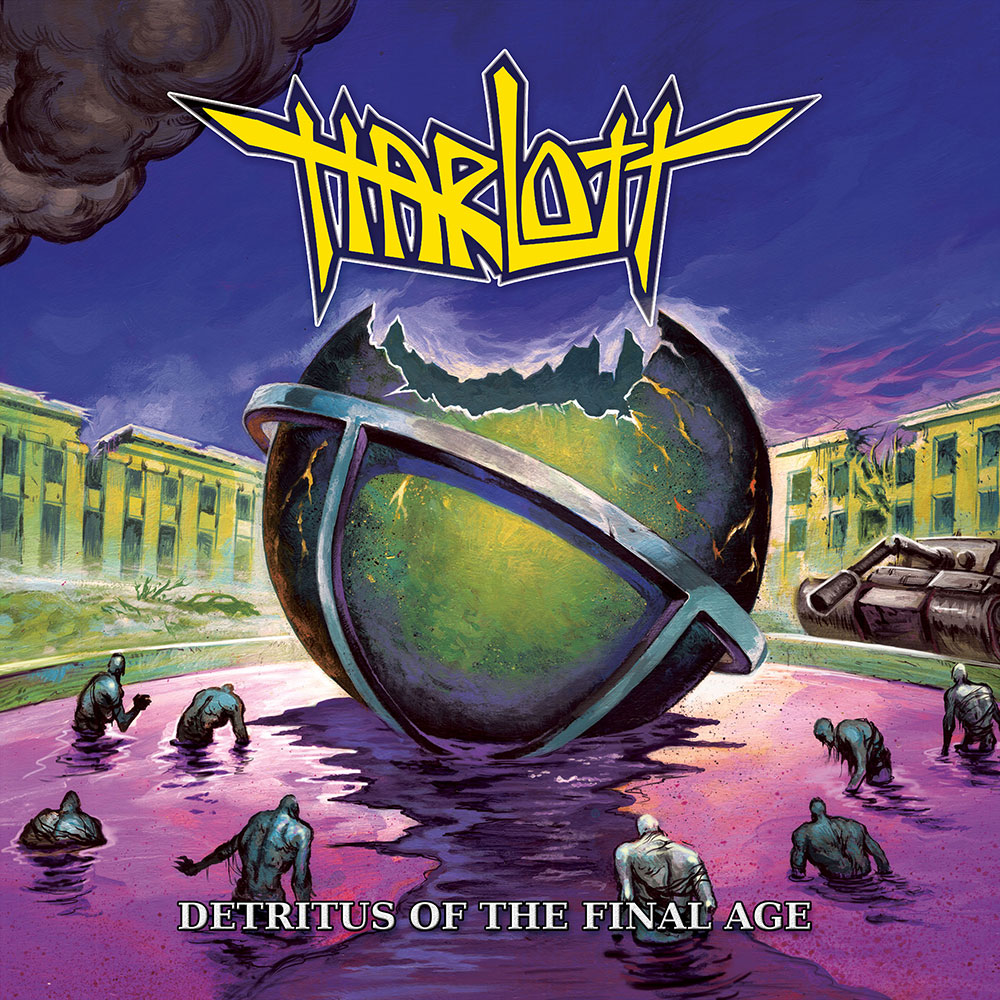 Detritus of the Final Age by Andrew Hudson

The band name Harlott, it means very little. It was just a word that sounded cool phonetically when I was a teenage boy and the extra T is alleviate issues we used to have with pronunciation as people kept coming at us with ‘Harlow”… which was weird. The word as I’m sure we are all aware means whore or prostitute but the old English style to the word makes for a band name, and we have a sick logo for it so I don’t spare too much thought on it anymore.

‘Detritus of the Final Age’ is what comes after the death of mankind. The remnants left over after everything dies. It was the natural step to follow extinction, and I’m always happy when I can tie my releases together in some way. My music has always been quite lyrically bleak to add a little darkness to the riffs and those kinds of lyrical themes continue on this latest album. Topics like war, religion, insanity, murder, and evil permeate the music and this title sums up the whole experience.

Our music inspiration is 80s thrash metal through and through, its always been the driving force behind what we do and how we do it. Obviously, Slayer plays a big part in thrash metal in general and we can’t deny that they weigh heavily into our music. We also tend to have some Kreator and Exodus comparisons thrown our way which is flattering to be perfectly honest. This album came from a more modern place in inspiration and there are lots of that musical choice that we made that lend themselves more to the kind

Thrash metal is just the one that always sung to me. Its never failed to interest me and excite me. I have a deep love for almost all metals and I find a time and place for every genre depending on my mood but Thrash metal is the one that I can listen to at any time or any place and it will get my heart pumping.

I do personally invest myself a fair bit into history which certainly helps lay down the foundations of understanding to better help me write lyrics about the human condition. Things like politics and religion have been ever-present in our history and have for the most part not changed terribly drastically. Those are the things that I draw heavily from when penning the lyrics. As a species, there are just so many facets of us that are as pure a form of evil and its that notion that make me angry enough to want to write words for the angry music.

The dark arts? I guess I would consider them to be the occult, any kind of predisposition or fascination with the morbid and noting to some kind of higher power that may be at play with it all. I’m no real expert but I’m not a terribly open-minded person when it comes to the supernatural or spiritual and I’ve spent a good amount of my professional life working In the physical sciences. There is an obsession with these Dark Arts in metal but it’s a very effective atmospheric tool when it comes to painting evil pictures to match evil music. I’m not sure if other musicians have genuine faith in satan or the like… but it’s not the case for me.

The artwork is the ruins of the UN building in Geneva (I think) with the slaves from our second album cover, however, their chains have been broken. We worked with Andrei Bouzikov who we have worked with for all 3 of our Metal Blade releases, mostly because he is easy to work with understands exactly what we are after. We give him such vague briefs to work on because the creativity runs out at the music really. Never been a forte of ours for art design, so we give him a single sentence and he sends us a sketch a week later that is exactly what we never realised we needed. The man is a total pro, and you would have seen a lot of his work on the toxic holocaust and municipal waste albums.