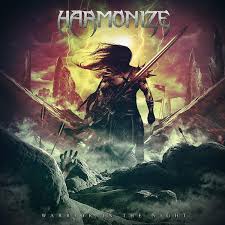 Warrior in the Night by George Constantinou

We were fascinated by the word “harmonize” and the correlations of it. We found that the name suits the story that our work is based on. The idea of harmony, balance and equilibrium. We are aware that it is not apparent as of now, but we aim to make it clearer eventually when the time is right.

‘Warrior in the Night’ is quite literally about a warrior. It is based on an original story we are developing. He happens to be one of the main characters. The tracks in our album are puzzle pieces to a bigger story. The album itself focuses on the nameless warrior, therefore expect some power and death metal elements.

Any type of inspiration should stem from within, that’s how listeners will also find they relate to your work. If you emotionally connect to your music, then you’re creating something authentic. We generally like to experiment with our music as we find that we are influenced by bands such as Amon Amarth, Iced Earth, Behemoth and many more. You may find that a few different sub-genres are present deliberately throughout our debut album, but which together coherently make sense. As we progress we witness our sound become more and more defined with some of our stronger influences becoming more apparent. Power, thrash and death mostly define our sound.

Initially, when we first formed, the band mostly played thrash, but later on, added more elements to our sound. As our tastes developed, so did our vision for the band. Hence, I don’t think our sound is solely classified as thrash. Since our work is conceptual and based on a fantasy fiction story, we also play power metal with some extreme elements such as doom and death. It is not a matter of philosophy or ideology associating with one particular genre, it is about how we can create a sound or tell a story through the means that best express it.

We are a conceptual band and we base our work on the story we are developing.As a fantasy story, some of the elements are associated loosely with historical images, aspects of death and killing bring horror into the story and mystical themes suggest obscure beliefs. Storylines, characters and hierarchy will inevitably bring politics to the plot, but not in a literal way. We aim to present a tale which is interpreted by the listener the way they perceive it.

We write about the dark arts or at least a version of black magic or magic in general or dark arts as you wish to refer to it. Dark Arts are called arts for a reason. Like performing arts and fine arts, dark arts are performed by practitioners. Arts from ancient times have been a form of ritual. In Ancient Greece, the theatre was a ritualistic performance for the god Dionysius. Music could also be considered a means of ritual, which in metal, is often associated with a dark realm.

Our artwork is suggestive of warlike elements and fantasy fiction imagery. The talented Giannis Nakos from Greece, known as Remedy art Design, is the creator. When we first saw his work, we knew we wanted to work with him. The cover of our album depicts the so-called Warrior in the Night. We wanted to have the figure of this nameless and faceless warrior, which was created with attention to detail. In the booklet, you can find more implications about the characters. We were detailed, Nakos immediately got what we were going for and delivered, capturing exactly the essence of the album, including the dark qualities and grieving and wrathful emotions and dreamlike atmosphere we aimed to convey. We couldn’t be happier.