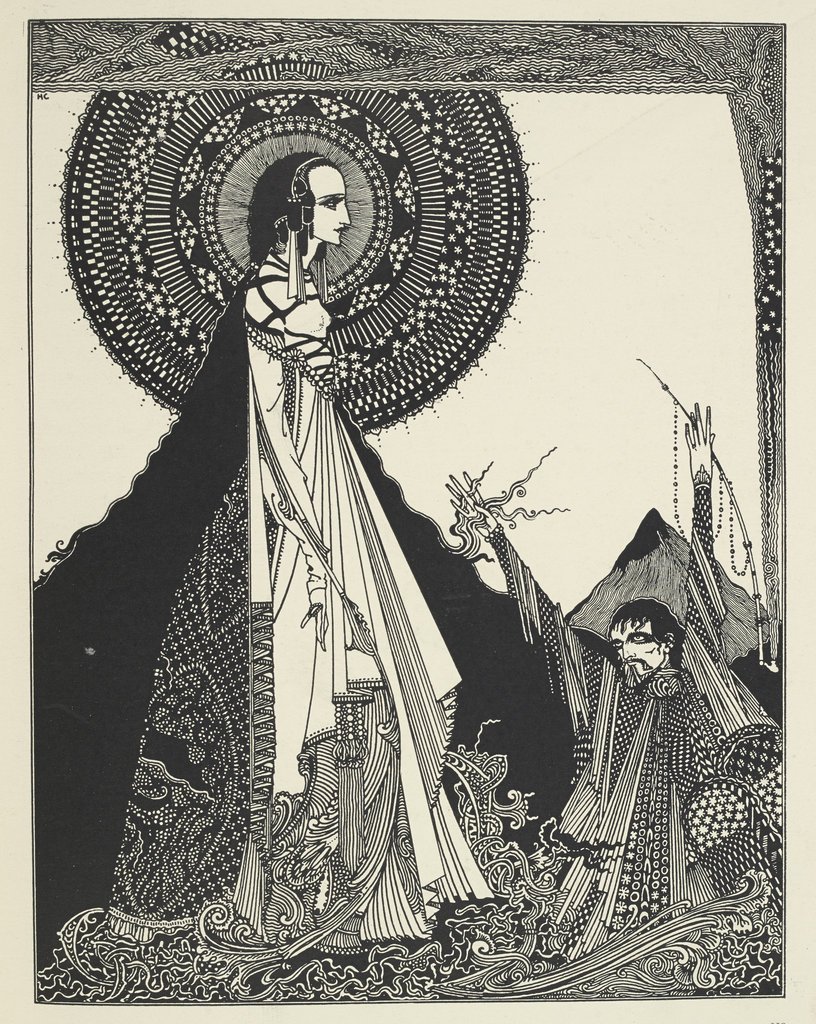 The son of a craftsman, Joshua Clarke, Clarke the younger was exposed to art (and in particular Art Nouveau) at an early age. He went to school in Belvedere College in Dublin. By his late teens, he was studying stained glass at the Dublin Art School. While there his The Consecration of St. Mel, Bishop of Longford, by St. Patrick won the gold medal for stained glass work in the 1910 Board of Education National Competition. Completing his education in his main field, Clarke travelled to London, where he sought employment as a book illustrator. Picked up by London publisher Harrap, he started with two commissions which were never completed: Samuel Taylor Coleridge’s The Rime of the Ancient Mariner (his work on which was destroyed during the 1916 Easter Rising) and an illustrated edition of Alexander Pope’s The Rape of the Lock.

Difficulties with these projects made Hans Christian Andersen’s Fairy Tales by Hans Christian Andersen his first printed work, however, in 1916—a title that included 16 colour plates and more than 24 monotone illustrations. This was closely followed by an illustrations for an edition of Edgar Allan Poe’s Tales of Mystery and Imagination: the first version of that title was restricted to monotone illustrations, while a second iteration with 8 colour plates and more than 24 monotone images was published in 1923.

The latter of these made his reputation as a book illustrator (this was during the golden age of gift-book illustration in the first quarter of the twentieth century: Clarke’s work can be compared to that of Aubrey Beardsley, Kay Nielsen, and Edmund Dulac). It was followed by editions of The Years at the Spring, containing 12 colour plates and more than 14 monotone images; (Lettice D’O. Walters, ed., 1920), Charles Perrault’s Fairy Tales of Perrault, and Goethe’s Faust, containing 8 colour plates and more than 70 monotone and duotone images (New York: Hartsdale House,1925). The last of these is perhaps his most famous work, and prefigures the disturbing imagery of 1960s psychedelia. Two of his most sought-after titles include promotional booklets for Jameson Irish Whiskey: A History of a Great House (1924, and subsequent reprints) and Elixir of Life (1925), which was written by Geofrey Warren. His final book was Selected Poems of Algernon Charles Swinburne, which was published in 1928. In the meantime, he had also been working hard in stained glass, producing more than 130 windows, he and his brother, Walter, having taken over his father’s studio after his death in 1921. A Harry Clarke window depicting Saint Patrick preaching to his disciples, commissioned in 1925 for St. Michael’s Church in Ballinasloe

Stained glass is central to Clarke’s career. His glass is distinguished by the finesse of its drawing, unusual in the medium, his use of rich colours (inspired by an early visit to see the stained glass of the Cathedral of Chartres, he was especially fond of deep blues), and an innovative integration of the window leading as part of the overall design (his use of heavy lines in his black and white book illustrations is probably derived from his glass techniques). Clarke’s stained glass work includes many religious windows but also much secular stained glass. Highlights of the former include the windows of the Honan Chapel in University College Cork, of the latter, a window illustrating John Keats’ The Eve of St. Agnes (now in the Hugh Lane Municipal Gallery in Dublin) and the Geneva Window. Perhaps his most seen work was the windows of Bewley’s Café on Dublin’s Grafton Street.

Unfortunately, ill health plagued both the Clarke brothers, and worn down by the pace of their work, and perhaps the toxic chemicals used in stained glass production, both died within a year of each other—Harry second in early 1931, of tuberculosis while trying to recuperate in Switzerland. Clarke’s work was influenced by both the passing Art Nouveau and coming Art Deco movements. His stained glass was particularly informed by the French Symbolist movement.