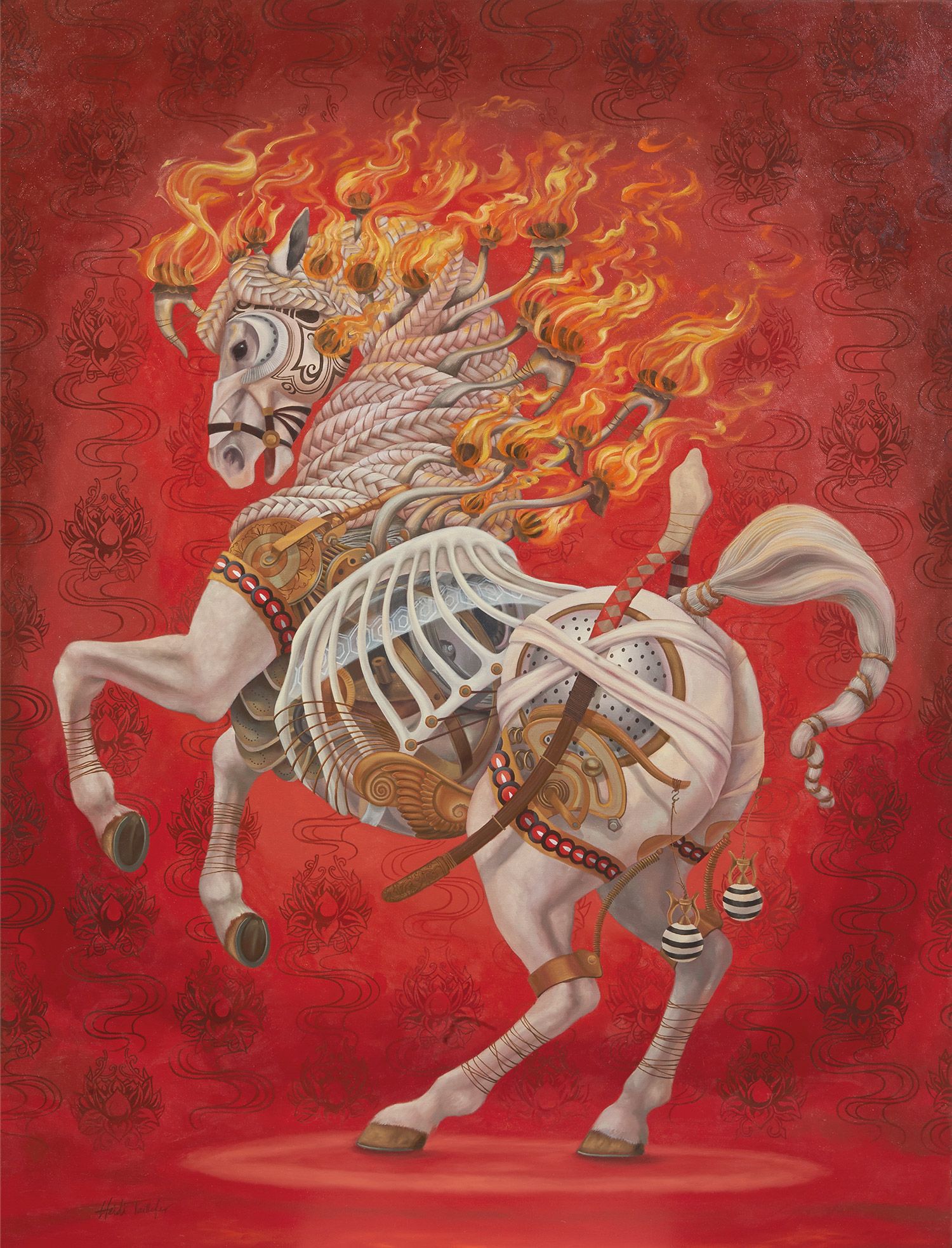 The mysteries of the unknown

I grew up in a family rich in creative talent, but I have only had private art lessons. I went so far as studying Humanistics at McGill university but I never studied art or illustration academically, though I did end up going into illustration in my early 20’s after teaching myself as much as I could regarding airbrushing or working with acrylics and various other mediums (there was way less use of computer generated art back then, since it was still just the early 90’s). I produced my first heavy metal band album cover a long after I had even stopped doing illustration for the most part, because Coheed and Cambria had noticed my art being exhibited in LA, and decided I was the perfect fit for their band’s vision.

I am currently an oil painter, and I start my images with an original sketch, which is painstakingly drawn over the course of one to a few days after much brainstorming and topic research, depending on the image. I used to rely solely on magazine images as references whereas now I research images online, and I do use a bit of Photoshop to establish some basic composition. From there I enlarge the drawing by printing it out on a much larger scale, and retrace it onto a canvas I prepare beforehand with a colored underpainting of some kind, often a colored texture I achieve by mixing oil and water soluble paints and thinning mediums.

When I worked in illustration I would get a lot of direction from art directors, unless it was editorial, but with bands I get mostly a briefing beforehand to get a handle on the concept for the album, and then I am mostly free to do what I want. I do have to get approval along the way to be sure the sketches meet the vision of the band, but it’s a lot like editorial illustration which leaves much more room for my own vision after the briefing.

When I paint now I like to incorporate aesthetics into my work, more than ever before. I used to be attracted to the beauty of decrepitude, and I found muddied colors and imagery with messy handling to be really beautiful, even if I didn’t incorporate that into my work. But now I am drawn to more classical beauty, in the form of composition, coloration, and the choice of elements I depict, which is a throwback to a time when traditional drawing and painting were much more valued than they are now.

I think music is essential to visual art, and they can be like twin representatives of each other, paired up to match. I often get a visual sense of things when listening to music, which has an energy and aesthetic that can be represented in a painted format.

I have always been drawn to the mysteries of the unknown, in religion and the occult, and more recently in parapsychology. Various religions express themselves in the form of stories and myths, which are a great source of inspiration to me, especially in Hinduism and Buddhism, and I have gotten a lot of inspiration from Greek mythology as well. A couple of years ago I also got heavily into meditation, and after reading the Kybalion, this resulted in some incredible and freaky experiences which got me learning a bit about Kabbalah and parapsychology, all of which found its way into my work.

In terms of style I am mostly inspired by classical imagery, very figurative, but I also love abstract art and often wish I could paint in such a way in order to have a looser freedom of expression. I have done several works which were a bit more abstract, but I seem to always fall back on figurative painting, which best describes what I am trying to depict symbolically. In general I am inspired by life experiences, which can be by way of a serious accident to a tumultuous relationship, but I am also inspired by what I observe around me or what I learn. I just came back from the UK and it has such a bloody history that it has me thinking about the blood lust humanity has had as a whole, with wars that raged between sides which ended in a final merger, making you wonder what all that destruction was for to begin with. I used to be more inspired by negativity and hardship, and have tried to depict peace and beauty instead, which is much more difficult. I think my work is mostly cathartic, and it’s a struggle to depict positivity because that isn’t so cathartic, but it’s a worthwhile challenge anyway.

I’m not that heavily involved with art groups but I am part of the Beinart Surreal Art Collective, which was founded by Jon Beinart in Australia. This provides an opportunity to exhibit work internationally, because he organizes shows in the US and abroad. I also get invited to show abroad from time to time, I’ll be in a 10th anniversary show at Corey Helford gallery in Los Angeles this August, and there is a show in Las Vegas coming up called “Crime on Canvas” which has been curated by M Modern Gallery, as part of the Life is Beautiful music festival happening at the same time. And I’ll be showing work in November in New York at AFA gallery, as well as a fine art print in Ubud, Bali, sometime in December.