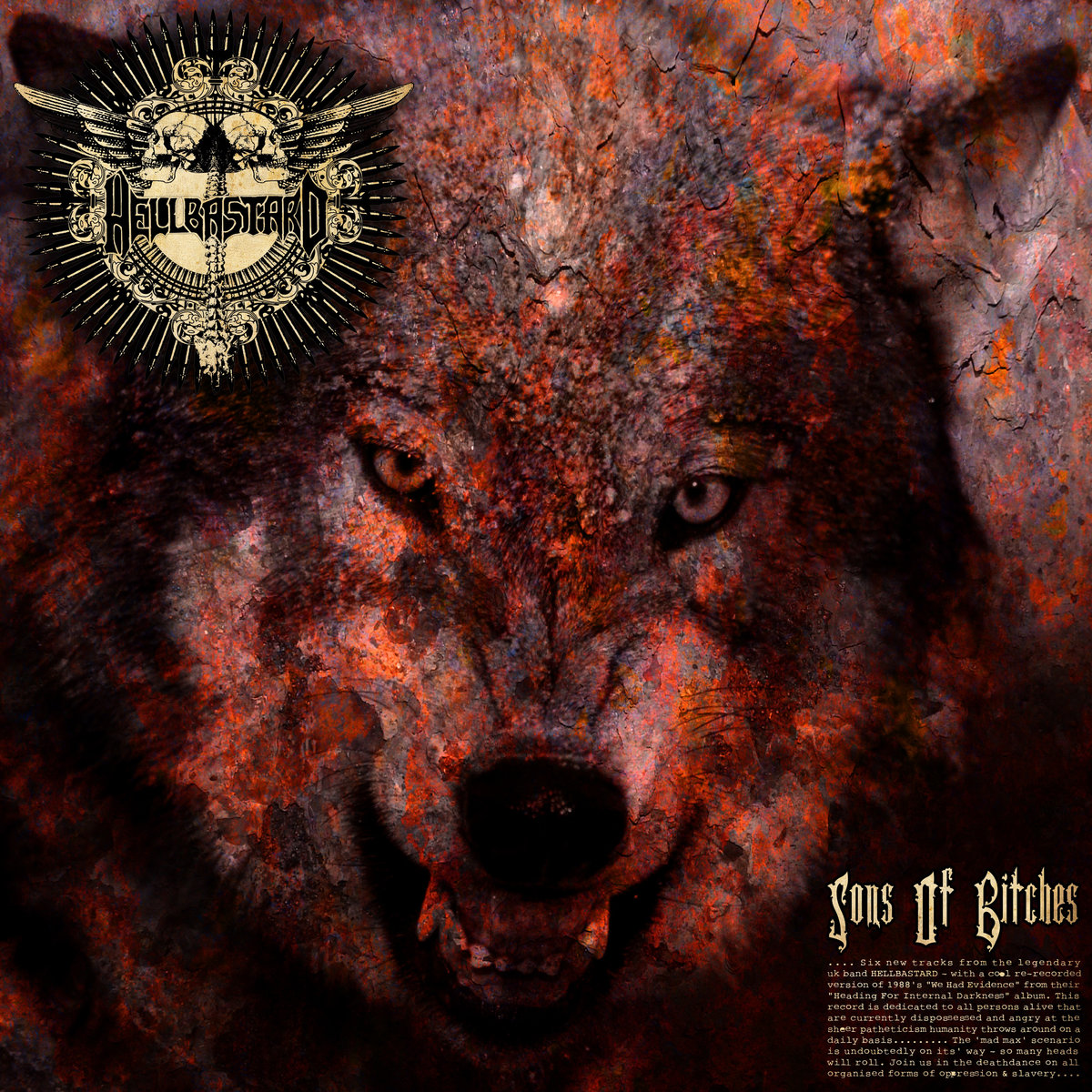 Hellbastard seem to be very much back in action, tighter, more powerful and still annoyed. Hellbastard bring socially aware lyrics and an unclassifiable form of punk/thrash metal music to the international stage. Founding vocalist/guitarist Malcolm “Scruff” Lewty saw fit to reform the ‘Bastard in 2008. Over the past five years, they have been pummeling stages throughout Europe and North America. Heavy Music Artwork catches up with Scruff on the new release “Sons of Bitches”, artwork and politics.

HMA: Welcome Hellbastard to our site.

Hellbastard: Thank you Alex, Sir, this is Malcolm “Scruff” Lewty replying to you. I have to say we are most honored that you think of us for an interview. The band consists of Nathan Ellis (Drums), Tom McCoombe (Guitars) Paul O’Shea (Bass) and myself (Guitars/Vocals)…. we also have a Mr. Laine Pearce-Rees as soundman on our live appearances… making things sound PHAT and eccentric. Laine has his own band “Daedulus’ Right Eye” which any music fans with open minds should check out. They are very very clever.

HMA: Last year “Sons of Bitches” was released. Can you tell us how it came to life?

Hellbastard:  Arcadia is by far the most ‘interesting’ track on there. It was basically the same formula we always use…  write songs in the house, take them to practice, jam them with the drummer first then bring everyone in to learn the shit….  get them tight and add/take away any ‘crap’ bits… play excessively in rehearsal and then record. I did guide guitars with drums on this EP…  best way to record by far, and then build up the track – easy, and the quickest way… It is exactly how all the past records were recorded.

As for the releasing of “Sons of Bitches” – first of all we agreed with a record label called “Profane Existence” to release it… but we had problems and backed away from that particular ‘deal’. Then the guy that set that deal up suggested he release it on his own label with his own band as a split 12″… so we said yes. Then I contacted Selfmadegod and PATAC Records who both agreed to release it as special limited editions… Selfmadegod released the posh “slip case” edition and ‘ regular ‘ CD and PATAC released GREEN vinyl and WHITE vinyl and even made some cool TEST PRESSINGS available with a really cool sleeve and free embroidered patch….

HMA: What was the creative direction for the artwork and production?

Hellbastard: Well this all depends on which format of the release you mean? The vinyl release of the 12″ split with Dresden had 3 tracks on it, 1) Wolfsong/Arcadia 2) System Whore 3) Sons of Bitches the front sleeve of this was designed by a guy called Jeremy Hush, he makes absolutely killer hand made artworks…. maybe anyone interested can visit hush.com to see. The CD release was myself and Selfmadegod agreeing on the sleeve, Selfmadegod are SOOOOOOO patient and cool with their bands, we definitely took a lot of time agreeing on stuff for sure, I thought it was really cool of Selfmadegod to make a limited edition version of the CD with a “slip case”,… we had the idea of a WOLF for the sleeve months before the release was due so we KNEW we wanted that,…but the rest of the art came together quite easily with help from 2 of my good friends (Jordan) from New Orleans and Djordje Miladnovic from Serbia…… put all our ideas together and there you have it. The PATAC Records release (LP) was myself and Djordje and I look at it even now and think it is awesome. We are very very happy with all 3 of the releases artwork wise.

Production wise we had Ajeet Gill mix the whole EP at his infamous “Hellfire” studios in Birmingham.  The recording was done by our very own Soundman, Laine Pearce-Rees at Pitchfork Studios here in Avon/Somerset  near where we live. We rehearse there, all our equipment is there so it made sense really.

HMA: How would you regard your sound now, how did it evolve since “Ripper Crust” was unleashed?

Hellbastard: We certainly do not want to stay the same! We take a LOT of time perfecting songs… and different sections of songs have to sound different according to the dynamic of the song structure. I think bands will ‘naturally’ evolve over time. We regard our overall sound as HELLBASTARD, we are a tight band and are not interested in performing sloppy pieces of music. Ripper Crust was written when I was so young, I never put much thought into those songs at all. Nowadays I am absolutely fussy, we all are – and we have naturally ‘evolved’ into that persuasion. Our ‘Sound’ is our sound I guess, we are not the critics of that… only the makers….  I don’t mean this to sound belligerent at all; it is just the way it is.  I get more ‘fussy’ every year and I will only get fussier…. SOME songs may need a little overdriven bass guitar instead of a clean sound, some tracks may cry out for wah-wah or whatever, you know? I have personally learnt a lot of things from playing in bands for over 35 years. Dynamics are KEY to a good song… it helps to have interesting lyrics too, of course!

HMA: The tone of voice and lyrical topic has remained political in true anarcho-punk ethos. What is the agenda nowadays, what motivates Hellbastards creative fury?

Hellbastard: I can only write lyrics that APPEAL to me. We don’t really have a true “anarcho-punk ethos” at least I don’t think we do anyway. Sure we came from that whole scene but we certainly are not ‘anarchists’, those are the men and women behind bars in prisons and jails – those are the men and women that have been / and are murdered by the state. Hellbastard to many people stands for a lot of things. Sure, we are angry at decisions made by our governments, but like it or not we are on the money – train. We have JOBS, we work, and we use the bank, credit cards and all that usual bullshit. To go “off-grid” would be lovely but at this point in time it is not viable for us as a band.

HMA: Considering the cult status and the number of records and cd’s HELLBASTARD have released, what are your views on the contemporary art style in music and beyond?

Hellbastard:  At the moment we couldn’t give a fuck for the latest “crust” band that follows the same old tired formulas and repetitive chords, structures and viewpoints. It does nothing but bore us. Trying something NEW is way more interesting! Who wrote the rulebook anyway? FUCK THE RULES! PUNK IS DEAD – LONG LIVE PUNK! You know what I mean? We are at a stage now where we really do have only so much tolerance for NOISE and simple formulas of songs, to hear them live, to see/hear another band that repeats a tired old formula is disheartening. I always thought MUSIC should be intelligent and have soul and passion and move forward forever changing and striving to better what came before.

When bands find a formula that sells well and gains them notoriety they tend to stick to it, to me that is sad, and a waste of time too. Such a shame and a crime to pigeonhole music and label it. We really do not like labels at all. There ARE some awesome bands out there for sure… take KATZENJAMMER for instance, ALL their songs are amazingly executed, they use different instruments, they play EACH OTHERS instruments and they all LOVE what they do… PLUS they are all FEMALE. That is very Un Heavy-Metal. How brilliant! That band makes a lot of heavy metal bands look like nothing but cunts. Period.

HMA: Baroness Thatcher recently passed away. “Rotting in hell” or “RIP”? Where do you stand?

Hellbastard: FUCK THAT THIEVING DESTRUCTIVE PARASITICAL COMMUNITY-DESTROYING WAR CRIMINAL BITCH. I saw what she did FIRSTHAND to our communities… some of the first bad things involved taking FREE MILK for kids away from schools, then it was other things like giving small businesses a harder time with taxes, then it was the STEEL industry in this country – then it was the coal mining industry – thousands of job losses, closures and basically making giant tax loopholes for the wealthy. That woman RAPED the UK. Then she ordered the ARMY to go and fuck shit up in the Falkland Islands. Countless soldiers AND civilians killed, wounded, beaten, raped and slaughtered. She should have bitten the bullet at Brighton… it was only a matter of time. PISS on her grave. Rat bastard that she was…

HMA: One of your Facebook comments retaliate “WE ARE IN THE MIDST OF A FUCKING WAR”. What were you referring to?

Hellbastard: That was me… I wrote that.  Look around you. We are in a war. Food, Petrol, oil, basic household necessities are all enveloped in rocketing soaring prices… What do the papers report on? VICTORIA and DAVID BECKHAM’S new perfume/soap range? WHAT THE FUCK? We are in a war… and it is getting worse as every day passes. Hey! I have a good idea! Let’s tax the lower classes that break their-fucking-backs earning MINIMUM WAGE… So far as I am concerned we don’t even deserve to be on this planet, so you know what? FUCK IT ALL drop the bomb. Let the rats and the wolves and the cockroaches have it all, at least they don’t fuck each other over for a percentage.

HMA: Thanks again and see hopefully on the road.

Hellbastard: Thank you Alex for the interview, very kind of you to think of us. Have a good life.