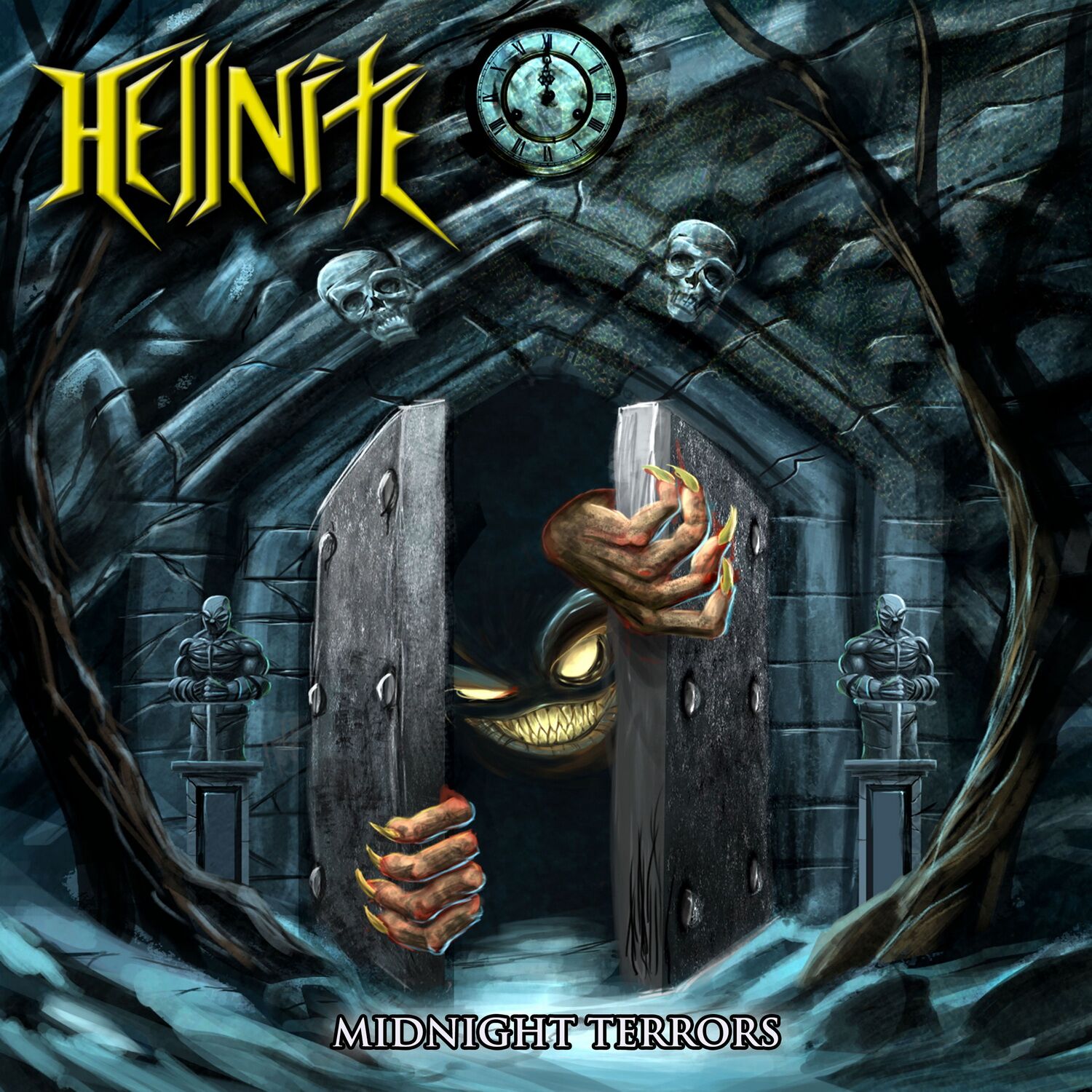 Hellnite is a heavy metal project that was founded in 2010 in Mexico City by Paolo Belmar (vocals and guitar), Mauricio Salas (Drums) and Luis “Chaps” Mora (bass) originally playing covers of early influences, heavyweights including Metallica, Anthrax and Megadeth. In 2011 and 2012 they began experimenting with various sounds and playing local events in their home city and their recognizable, heavy original music in the style of Kreator, Slayer and Death was lapped up by fans. The first EP ‘Manipulator’ was debuted in 2013 and shortly after, the band ultimately dissolved and Belmar moved to Canada. A metal fan from a young age determined to keep his project going, Belmar continued to work on the project in his new home of Edmonton, Canada. Working diligently, he performed all the parts for the second album, “Midnight Terrors” which was released in February 2019. Dauntlessly carrying on, Hellnite now has gathered the original lineup to play live and has been bringing their music to metalheads across Canada and plans to unleash the third album to complement ‘Midnight Terrors’ is underway.

CPBN: My mother gave me an acoustic guitar at a very young age, I was probably 9, I started to play it and enjoy it by myself, somehow I was really into it because before I was born my parents use to like rock music, so I grew up listening bands such as Green Day, AC/ DC, Iron Maiden, Queen, Kiss and others and then in high school I started to take music lessons. I started playing in bands since junior high with other kids who liked the same kind of music, we used to play Green Day covers and other similar stuff, then we created Hellnite in the summer of 2010 if I’m not wrong, it was the summer before the beginning of high school, and here we are.

Chaps: Since the first time I heard the bass, I was very excited by the vibrations and the bass notes made me feel a lot of things in my heart. When Paolo and I were 12 we talked about having a band, I would play bass and Paolo guitar. In 8th grade, I met Mau and we also talked about starting a band cause he wanted to play the drums. So I told Paolo about Mau, that was crazy. After that we started the band, I don’t know if it’s a coincidence or the universe wanted us to create Hellnite together. We started playing covers like a lot of bands and over time we started playing our songs. Staying with my two best friends, and even better, playing in a band together makes me so happy.

HMA: Tell us about the journey you have taken in recording your new album?

Honestly, it was a long process and there were many things involved, the process of Paolo moving to Canada and plenty of other stuff delayed the album many years. We started writing Midnight Terrors in 2014 as a band, we were playing some live shows and stuff, then in 2015 we stopped the band for one year to focus on other stuff and did’t work much in the album. 2016 we started to pick up the pieces and kept working with the album, but at the beginning of 2017 Paolo moved to Canada and that delayed the plans even more. Since Paolo got better work opportunities in Canada he was able to work on the album by himself in a better way and he had to finish the album by himself. In summer of 2018 we finish the production, we signed with the label and the album was released in 2019 finally.

Basically our influences took us there, we grew up listening to Metallica, Megadeth, etc. Midnight Terrors reflects our early influences with our personal touch and maybe some other aspects of other bands, It is heavy metal, but is simple and probably one of the light genres among the Metal sub-genres. Since the beginning the point of Hellnite was to be a metal band without going to deep into that concept, our future releases I’m afraid are going to be completely different.

Alex Camacho from Inner brush Studios was the designer of that magnificent artwork, the artwork was meant to represent, fear and curiosity. It shows a creature behind the gates of the unknown, no-one knows what is that creature or what is behind the gates, that is basically what Midnight Terrors is all about. http://www.facebook.com/innerbrushstudio that’s their Facebook link.