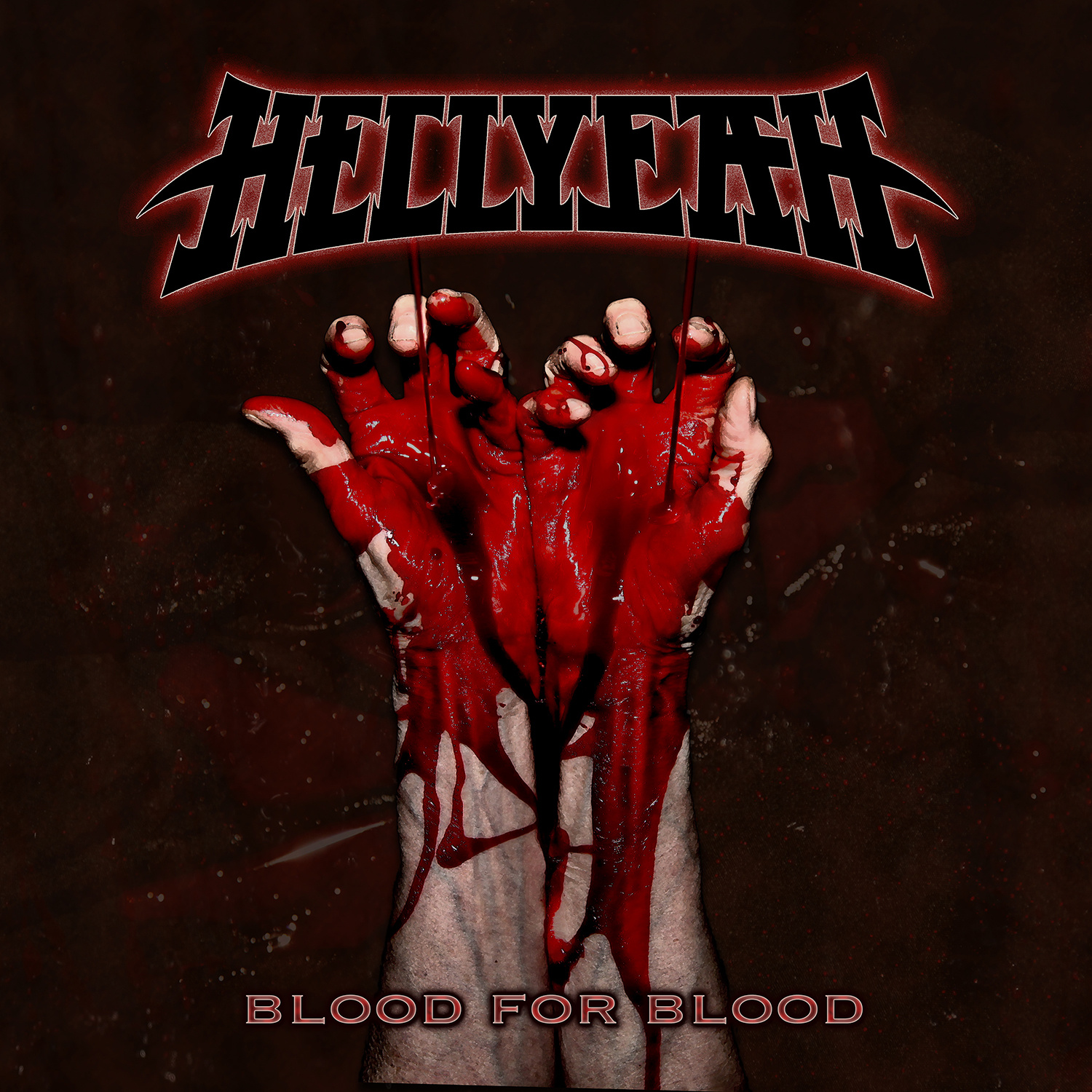 In conversation with legend Vinnie Paul of Hellyeah

Hellyeah is back with a new line up, a new tour and a brand new record ‘Blood for Blood’. Just over a month after its release, there is no doubt this is their heaviest album so far. It is pure raw power and showcases Hellyeah’s real identity, moving away from their super group status (as past members of Pantera and Mudvayne), and instead revealing that Hellyeah has evolved into the epical ass-kicking band they were destined to be. I had the honour of meeting up with the man himself Vinnie Paul to chat about the new record, the new tour, the new line up, music, heavy metal and the Dallas Cowboys.

HMA: Can you tell me about the vision behind the new record?

Hellyeah: Blood for blood, man. I feel like it’s the best record we’ve ever made. The band really came into its own on this record. It’s the most focused record we’ve ever made, and it’s really a true metal record. It’s a roller-coaster ride. It takes you to a lot of emotions, musically and lyrically. I like peaks and valleys in music. You can’t beat your head against the wall 24/7, and I think this record really kicks your ass but then it has those moments when it gives you a minute to breathe and to take in more. Like a song like “Moth” or “Hush,” or even “Black December,” then burns your ass off with something like “Say When.” I’m really proud of it. It’s doing really great in the U.S. and Canada, and we’re just now feeling like people over here are really starting to catch on to what is going on with the band. It’s been a good tour.

HMA: The new record is much heavier, much more in your face and less ‘southern’, do you think this is also because of the change in the lineup?

Hellyeah: No, they didn’t leave. We got rid of them. Let’s get that straight. It’s like sometimes you got to get rid of cancer to get stronger. It made us better. It made us stronger. It’s the best line up we’ve ever had in the band. As far as the southern thing goes, with the first two Hellyeah records, they were very experimental for us. We really wanted to do something outside of what we’ve done in our previous bands. When a song like “Alcohol and Ass” or “Hell of a Time” or something like that, it would not ever fly in a band like Pantera or Mudvayne, or even Nothing Face. It was a really good experience for us musically, and I think that’s one of the reasons why the band was really misunderstood from the start. People just thought it was this party band. We really wanted to have a good time. Get back to doing music for the reason why we all started in the first place because we love it. To really step out, branch out, and touch on some southern rock, and blues, almost country, fucking straight-up rock and roll, and then there was metal mixed in there. We got that out of our system and we got to “Band of Brothers”, and it was a much more focused metal record. This is just a further continuation of that with “Blood for Blood.”

HMA: I have to ask…. Is there a story behind the “Alcohol and Ass” lyrics? I love that song.

Hellyeah: And shagging as you guys would say over here. They wrote that in the studio in about 20 minutes. When Standers went to go on a beer run, and they were just messing around with something. I came back in the next day and I heard the basis of it, which was just an acoustic thing. I loved it, and I said let’s just build a whole fucking song around it. So that’s how it came.

HMA: Such a great song.

Hellyeah: You won’t be hearing it tonight because it is not on the set list but next time we come back, we might bring it back.

HMA: What is the process behind your songwriting? What is the inspiration for the lyrics and music?

Hellyeah: The record was done by three people. Myself, Tom and Chad. We had already parted ways with Greg and Bob and I think that is one of the reasons why the record is so focused. Sometimes you have too many chefs in the kitchen when you are putting things together. It really enabled Tom to branch out as a guitar player and really showcase what his skills were. Chad really stepped up to the plate.

As far as the songwriting, it has always been me and Tom will just sit down and start jamming. It will either start with a drum idea or a guitar idea that he had and then we will build it, put it together as a bed of music.

We had 12 beds of music to work with before we went to Vegas to work with Kevin and then once Chad started working on them, that is when they really become songs. He brings all the lyrics and melodies to it. Working with Kevin Churko was great. He is a super-duper producer. He was exactly what we needed. A really good sounding board for us and someone that understood our vision and what we wanted with the record.

HMA: Do you record at the studio in your house Vegas or Texas?

Hellyeah: We did all the demos at my house and we did the previous records at my house in Texas but we went to Vegas. I met Kevin five years ago out there at his recording studio. It is two miles from my house and I just really enjoyed being around the dude and loved his work. He worked with Mutt Lange, the greatest producer in the world. He has done everything from Shania Twain to Ozzy Osborne. He is a big player and he really, really gets it and when we started talking about using an outside producer, it was a no-brainer. I was like, “His studio is two miles from my house. We’ve got to use this dude. He is the shit.”

HMA: Is there any process behind your covers, your album covers? Is it something important for you, to represent your music visually?

Hellyeah: It is pretty much just imagery. It really doesn’t always have any kind of ties to the music itself. They are just themes. The “Blood for Blood” cover is really just a thought-provoking thing. It is “Blood for Blood”. It is that old school, “An Eye for an Eye, Tooth for a Tooth” mentality and that is kind of what it signifies.

HMA: Heavy metal music is much more mainstream now, do you think it was it better before when you were kids?

You can get any song you want at the click of the button on your computer so they don’t go and buy the record. You can’t even have a record anymore hardly. I remember when I was a kid and you were a kid, we would get the record and look at it and pull the sleeve out and read all the credits. I mean you try reading the fucking credits on a CD and you need glasses. It’s ridiculous. It has changed but I think the people in Europe are still really passionate about it. The fans in America are great but they don’t have that same “we want to know everything about you” kind of thing. The only thing that is mainstream about metal is that it is more accessible on the radio these days in the states. It is still the biggest form of underground music there is. It always will be.

HMA: If someone came up to you that didn’t know anything about metal, what album would you play for them?

Hellyeah: What album would I play for them? If you want to know, to me, the real fucking metal band, I would play them “British Steel” by Judas Priest. That fucking says it all right there.

HMA: What is your favourite band of all time?

Hellyeah: Van Halen. That is my favourite band…

HMA: I thought you were going to say KISS.

Hellyeah: Well, KISS and Van Halen. The Van Halen brothers really inspired me and Dime to do what we did and I have always been crazy about Van Halen but KISS is what made me want to play music to start with. They obviously came along before Van Halen and apparently Gene Simmons had something to do with finding Van Halen and all that good stuff, so…

HMA: I didn’t know that.

Hellyeah: Yeah, he did their first demo so they are kind of tied together.

HMA: If you could choose any three bands to play within your dream-show, which bands would you choose?

Hellyeah: There are actually four bands me and my brother dreamed of playing with when we were kids and one was Judas Priest. We did our first European tour ever with Judas Priest in 1990 with Painkiller tour and that was amazing.

Next would be Black Sabbath. We did the Reunion tour in ’99. That was a dream come true.

Next would be KISS. We did their reunion tour in ’97. I remember, it was in South America and we did three sold-out nights in Mexico City and then we were flying from Mexico to Santiago, Chile and they were in first class, we were in business class. It was my birthday and all four of them came back to me and gave me that brand new Kiss storybook that was like this thick. It was like 250 bucks. They all autographed it and then they all sang four-part harmony “Happy Birthday” to me on the plane. I felt like a 10-year-old kid. I started crying. I was shaking all over. It was incredible.

The only other band that I always dreamed of playing with and never played even one show with is Van Halen. I hope someday, somewhere down the line, we are at a festival. We were supposed to play with them in Australia last year but they cancelled the festival so we didn’t get to do it.

Freddy Kruger, the first one, “Nightmare on Elm Street”, I thought that was pretty scary. You have to think back over the history of horror movies. You have Dracula and the mummy and this and that and the other and when they came on with Freddy Kruger, he was the first new monster they came up with in a long time. He had that long claw and all that. That was pretty creepy.

HMA:  And he can get you anywhere.

Hellyeah: I can watch a horror movie here and there but I’m not really into the blood and guts kind of thing.

Hellyeah: Dallas Cowboys. Football season is here. Hockey. Love hockey. I love all my sports teams in Dallas. Dallas Stars. Texas Rangers, the baseball team. Of course, the Cowboys. We are going to have a rough year this year, I think, but I am excited. Football is right around the corner. Preseason is already going and the season starts September 7th.

HMA: Good luck. I know nothing about sports.

Hellyeah: All right. Enjoy the show tonight. We are going to kick your ass. It will be nice, hot, sloppy and sweaty. You guys enjoy the show. I have a couple more of these things to go so we will keep rocking and rolling.

HMA:  Thank you so much