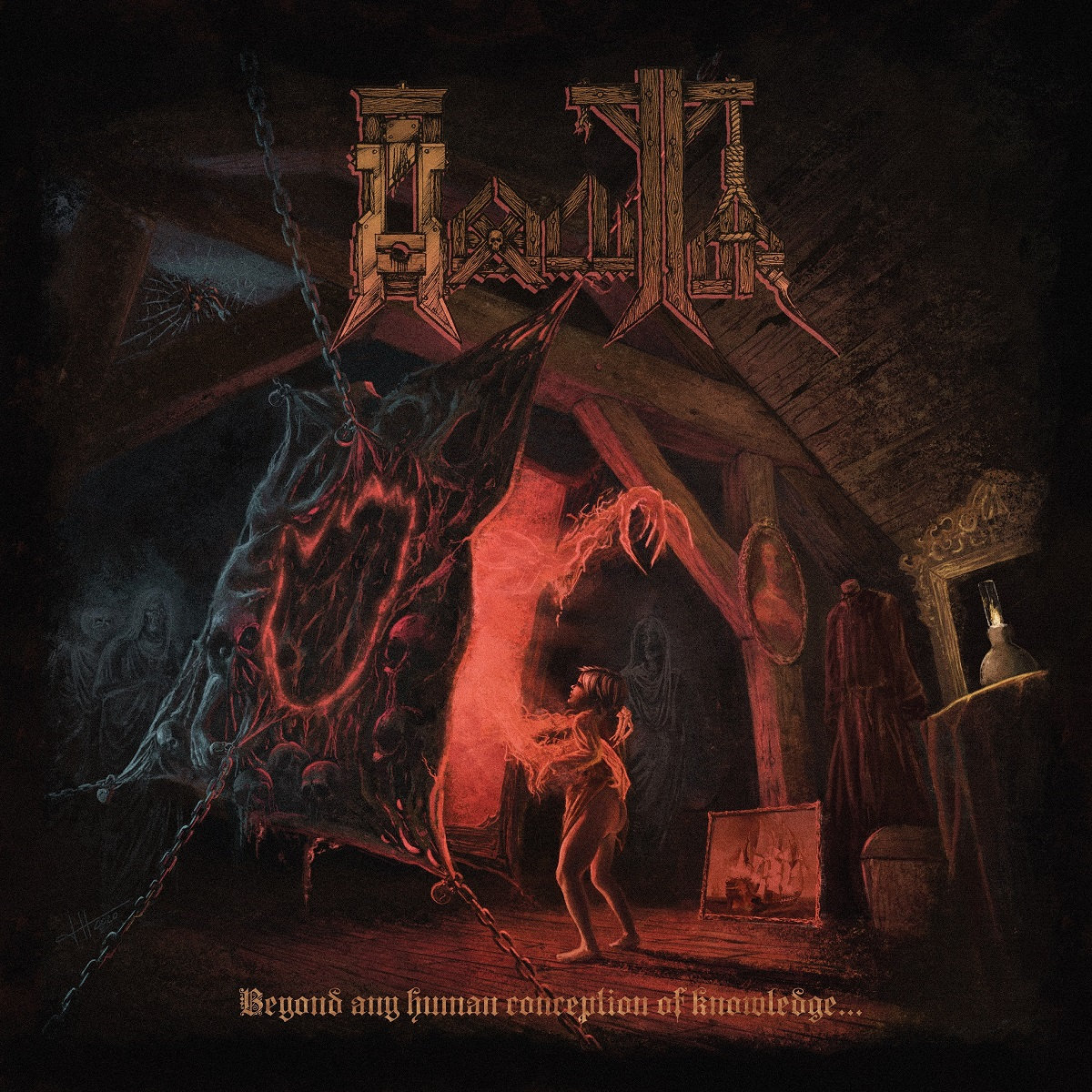 Beyond Any Human Conception of Knowledge by Jey Deflagratör

Hexecutor name came from the idea to find a name that stands in one word. Short, simple, efficient. It’s a mix of two words, since the “H” is from Hexe, for witchcraft, but it still maintains the goal as mentioned above. It means what it means, and follows the tradition of names like Slayer, Dismember, Grave, Sodom, Saxon or Razor. It doesn’t need a profound meaning, just to be catchy and aggressive. The sentence ‘Beyond any human conception of knowledge’ is an extract from the song ‘Belzebuth’s Apocryphal Mark’. It’s opened to multiple and personal interpretations; that said, it’s a concept album based on legends, myths, popular tales and history of Brittany/Bretagne/Breizh, our region. There’s a paradox between the fantastic content of those stories and the fact that all our sources are taken from books, which are typically a form of human knowledge. In another hand, if you put it back to the context of Belzebuth’s Apocryphal Mark’s lyrics, a song about a demonic book of spells and necromancy called Agrippa (among other names, we will deepen this topic a little bit more later). It is a Lovecraft-inspired way to describe the content of the book and its nature itself: it’s from another world, it obeys to mysterious rules, it’s beyond everything any sane human could understand.

We started in 2011 in a typical thrash metal style, influenced by the harsh sound, the speed and the evil feeling of early Slayer, Razor, Destruction, Sepultura, Deathrow, Whiplash, Morbid Saint, Kreator, etc. with a bias for classic hard rock/heavy metal inspirations, and, in a much lesser degree, for more extreme metal’s. That was almost ten years ago. With time, it became obvious to diversify our influences, to play something closer to the music we would like to listen to. We don’t want to limit ourselves to the specific gimmicks of one sub-genre. In the new record, we easily go for long songs, with atmosphere changes, different sub-parts that suit the narrative approach of the lyrics. I guess the result is quite progressive. But it’s no surprise considering our influences.

We still sound like 1988 rabid thrashers in many aspects, but even it can sound strange, our influences heavily include bands as different as Uriah Heep, Bathory, Blue Öyster Cult, Absu, Gospel of the Horns, UFO, Morbid Angel, King Diamond, Thin Lizzy, early Darkthrone, Satyricon and Gorgoroth, Manowar, Lady Macbeth, early Necrophobic, Damnation (swe), some classical (mostly romantic) composers, Sargeist, The Eagles, Yngwie Malmsteen, Vomitor, Dawn, Retentum Curiae, etc. I think most people like to categorise. I understand why. But I don’t think it’s a good idea to listen to our music thinking about who we want to look like or what we want to do.

‘Beyond any human conception of knowledge…’ is a concept album based exclusively on myths, factual history and fantastic tales from our region, Brittany/Bretagne/Breizh, kept alive by the oral tradition and collected by authors, folklorists and poets such as Anatole Le Braz, Paul Sébillot or François Cadic.

Each of the eight tracks is based on a specific local theme, the ‘White Lady of Trecesson’, the ghost of a young lady buried alive in a wedding dress for the reason that had remained mysterious. The Lost City of Ys/Is, magically engulfed, and the unholy figure of Dahut, daughter of King Gradlon, banished under the waters of Douarnenez’s bay and turned into a siren for her carnal sins ; a glorification of the heroism of the Saint-Malo privateer Robert Surcouf ; an insight into the legend of the Agrippa/Ar Vif/Egremont/An Negromans, a book of spells signed by thouthands of devils and marked by the hoof of Belzebuth himself, acting as a living entity with its own will, illustrated on the cover artworks; the curse upon the two calvaries of Kerguh, called “Cross of the undead”, where, each night, a legion of damned spirits rise out of Hell and dance under the command of Satan. The tale of the plague personified in the form of an older woman travelling to the village of Camors to spread death… “Brecheliant” is an instrumental ode to the magnificent Paimpont forest. No words are needed since most legends attributed to this place depend on the historicity of King Arthur or came from marketing campaigns to attract tourists. Anyone that would spend a night here would understand why this had to be instrumental.

I guess we always had a good interest for historical topics and narrative lyrics, mostly related to our City, our region or to France: the first album features three songs on the famous Affair of the Poisons on Louis XIV’s court, one song about the Breton poisoner Hélène Jégado, maybe one of the most important “serial killer” known in history, and one is about our life of working-class alcoholic headbangers in our city, Rennes. Other songs from this album deal with devils, succubus, black mass, evil warfare… nothing you’ve never heard about.

EP of Hangmen of Roazhon of the demo contains songs about WWI and II, french resistance, the families of executioners that applied the death sentence in our city back in the days when it was considered as a good solution against minor crimes and one song about the St. Bartholomew’s Day massacre. Among other devilry, you’re already familiar with.

Why thrash metal? That’s a good question. Back in 2011, it sounded logical. We’ve always been fans of hard rock/heavy and black/death metal as well. But at that time, the four of us I don’t think we even thought about it. It came naturally. Right now, as I told you, we let ourselves go to more outside influences. What is good in this sub-genre is you have a “way” of playing (drum beats, palm-muted fast riffs, etc.), but with that “way” of doing you can play different things (in regard of melodies, harmonies, song structures, etc.), that could be related to other sub-genres. That’s why we don’t like to define our music. I think it has become pointless for us. I don’t think there is anything such as a philosophy related to thrash metal. It’s more of an anti-philosophy: hate, violence, evil and sonic warfare.

Our lyrics deal with thematics such as witchcraft, revenants, spirits, murders taken from true stories, sexual intercourses with demons, plagues, history, executions, conspiracies, more murders, more sex with demons, etc. If you assume any lyrics should be labelled as art, I think we’re more or less into “dark arts”. Same goes for the music. I wouldn’t consider it as cheerful.

The artwork is by Jon Whiplash. He’s a great and skilled artist and a close friend and was behind the first album’s artwork as well. It shows the frightful book of Agrippa, with the signature of Belzebuth, tied with chains to an old twisted beam, as the legend tells us. The cassock gives an indication of why the book can be found in this particular attic; it’s also a fragment of the myth. The role of the child, who he is, what he is doing, in what purpose, what he wants from the book and what the book wants from him, is opened, in the same spirit as the title, to personal interpretations. All we can advise is to think about few symbolism and metaphors: innocence and evil, our inexorable nature of sinners, the paradoxical desire for suffering, the idea of facing horror, evil and violence as an initiation to grow up, the figure of Lucifer, considered unholy for bringing knowledge to men, the (not so) hidden paedophilia among the religious institutions and the fatalistic acceptance of death.

Some other elements are linked to other songs from this album, and to one from the previous one. But we will not tell everything. We briefed Jon with most of the factual elements we just evoked, the main colours we want and a rough idea of composition. What’s great about working with him is that he can understand our ideas and represent all the specific elements we ask, and still put a very personal touch on it. I think he gave a whole new dimension to it. This evil book, I never imagined it could look like this. His vision of it is totally beyond what we expected. Same goes for the point of view, the strange, claustrophobic perspective, the use of lights… We gave him an idea that seemed strange, even for us. We weren’t even sure it would be possible to realize, and he made something amazing out of it. Go to his Facebook page “Jon Whiplash illustration” to see his other work, and see the amount of talent of that man.