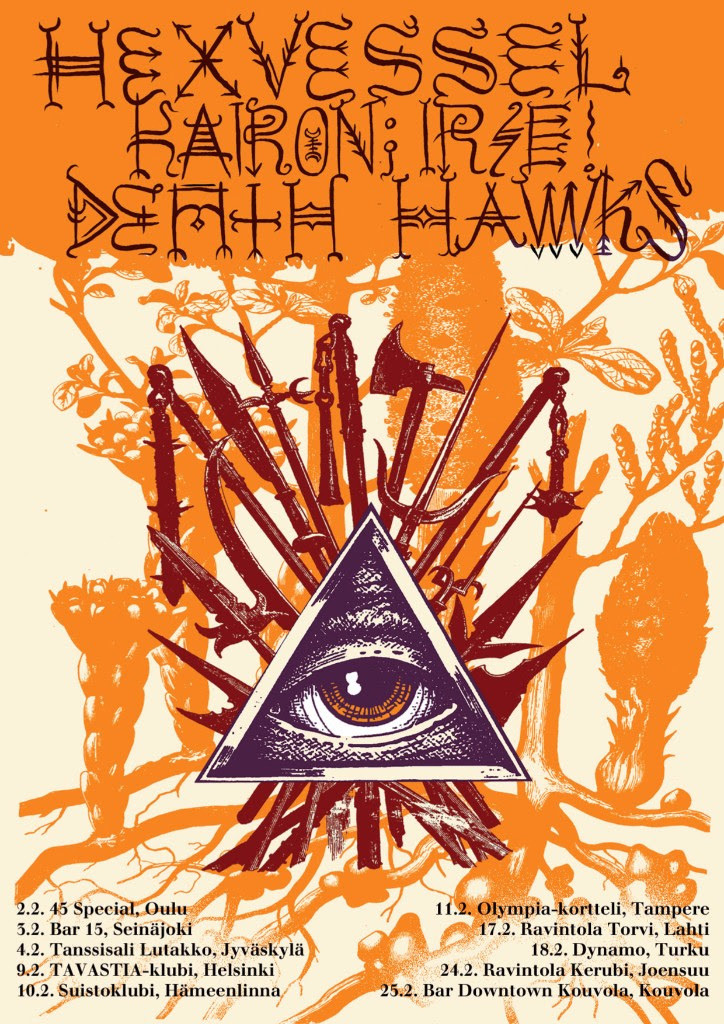 In early 2016 HEXVESSEL released their 3rd album “When We Are Death”, praised by media worldwide. Prog Magazine UK called it “a vision quest filled with wonder and baleful energy” and Kerrang honored it with a 4K review: “Marrying the retrofied experimentalism of King Crimson to the hazy musicality of Hawkwind…” The band simply calls it psychedelic forest folk. One of the many live gigs in support of the new album was at the Menuo Juodaragis Festival in the national forest of Lithuania. The band brought Finnish filmmaker (and former Sentenced drummer) Vesa Ranta to film this special event for a short concert film. Jaime Gomez Arellano who already worked on the Hexvessel albums as well as producing bands like Solstafir and Paradise Lost took care of the audio live mix.

The band comments: “Our idea was to try to capture a sense of the transcendental nature of one of our live shows, when you set our music to the backdrop of the forest at an event that has great meaning for us spiritually. There are a few events that have enabled this perfect conjuration of what Hexvessel means to happen. Menuo Juodaragis is one of those such magic events. A pagan festival held deep in the wilds of Lithuania on a beautifully lush island surrounded by forests, It is an event which celebrates our culture and heritage and it is utterly unique in Europe. We were so proud to go there and play the main stage and in our own way offer a sacrifice of sound to the great transformation that was taking place within people at the festival. It’s a place where you can feel the ancients breath, you can sense a great unity of spirit and mind and it’s a very warm and inclusive, familiar atmosphere. We were delighted to feel bound and compelled together with people from all parts of the world who had travelled there to get some sense of an old and almost forgotten religion. When you are there, really brought out of yourself and back into your more primitive awareness, you know that the old religion still exists only waiting to be pulled out again from the earth, the ash and the roots of age-old trees. Here you know the real meaning of what it was to truly know the earth and the universe. It was a beautiful and life-changing event that we are very happy to have this visual and resonant memento of.”

In February 2017 Hexvessel will take to the road with Kairon Irse and Death Hawks for a  1 0 date strong headline run of Finland. The three enigmatic pioneers of the current and modern psych rock movement in Finland will undertake a spiritual journey to the edges of sound and beyond for an extensive and comprehensive tour of most of the big towns in Finland. Rarely does such an exciting lineup come together.

HEXVESSEL singer and guitarist Mat McNerney comments: “We’ve been wanting to go on a more thorough tour of Finland for some time now. Having played the bigger cities many times and had many successful shows there, it was time for us to get out and play the other towns and meet our fans and friends in other parts of the country. We put together this tour, with two other bands that we feel represent the best of what’s going on in the scene here in Finland right now, so that people would have a really massive dose of entertainment for the evening and get more than they paid for in money for a ticket. We wanted to create an experience for people, and a tour that people would talk about and discuss for years to come. Death Hawks have a wonderfully immersive, tripped out Sun Ra sound with this undercurrent of really uplifting and purifying atmosphere. They are simply one of the best live bands in Finland right now and I think international success is right on the cusp of their horizon. Kairon Irse are an underground treasure that a lot of people have been talking about for some time now. Apparently an astounding live act, that we’re very eager to see in some of these beautiful venues that we are taking this tour to (Tavastia and Olympia for example). The band is progressive and technical at a King Crimson level, with a lot of feeling and emotion but also with masses of wild and bug-eyed madness included. I wanted people to look at the lineup for this tour and go “FUCK! Hexvessel, Death Hawks AND Kairon Irse!!” and we’ve been hearing that again and again since we announced this package. It’s one of those dream lineups. I can’t wait to be a part of it and take this multi-dimensional caravan across this magical land!”