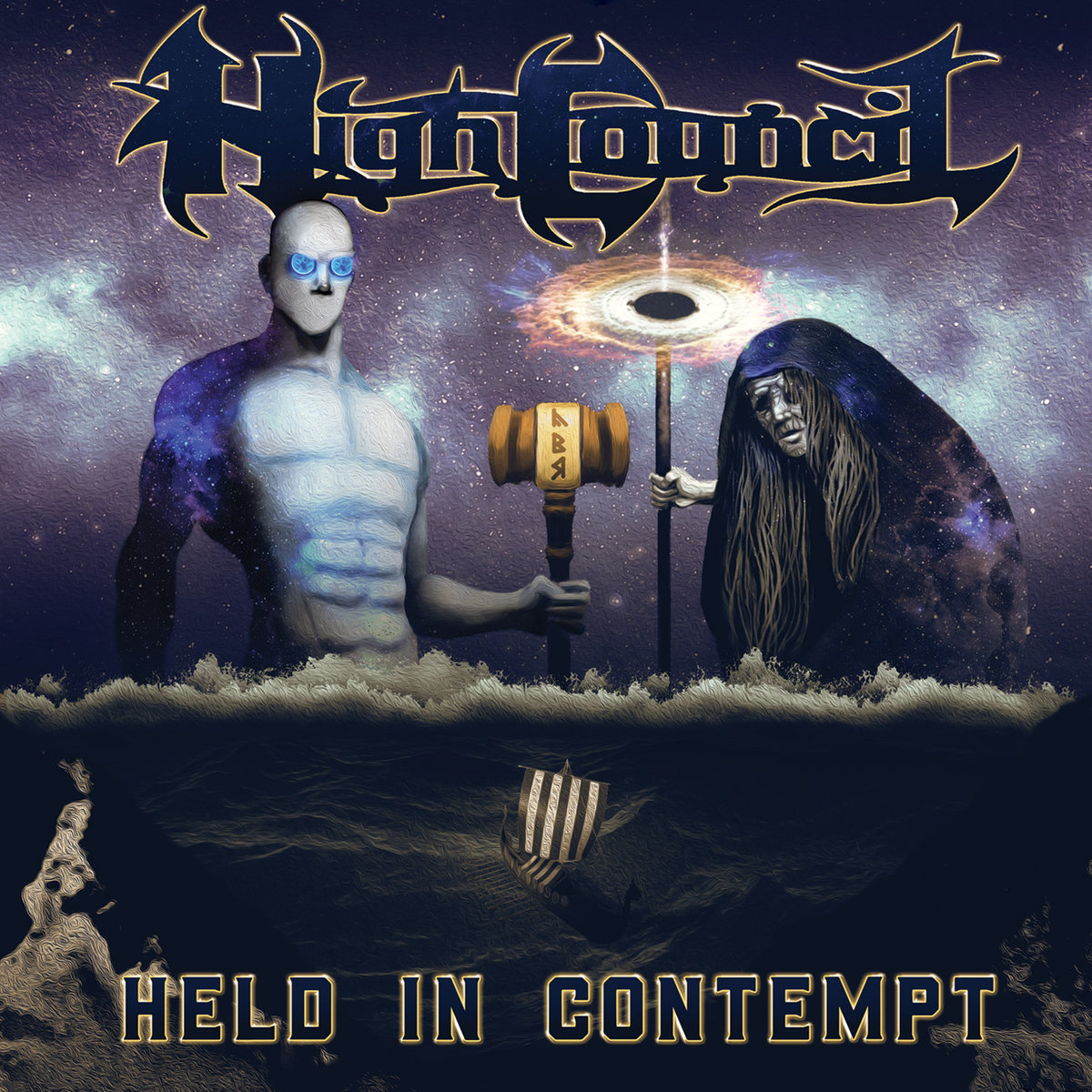 Held in Contempt By Bob Saunders

From the abandoned asylums and haunted pine barrens of Southern New Jersey comes High Council, an interminable force with one foot in hell and the other crushing the throat of mediocrity. For years, High Council has been bludgeoning its loyal fans with ferocious epics of riff-fueled neoclassic rock-metal. Consisting of Bob Saunders, Greg “Wolfman Vegas” McKeever, Steve Donahue, and Lou Di Domenico, High Council has released four studio EPs and has mangled audiences at venues all around the greater northeast US, consolidating their power in the Philadelphia/South Jersey area. The Council has recently released its 5th studio offering, ‘Held In Contempt’ on Via Nocturna Records, with an eye to spreading this God-forsaken madness to the rest of the world.

What’s better, diamond or platinum? I want a copy of ‘Held In Contempt’ in every loosely defined “shelter” across all of civilisation. Go big or go home, brother. Honestly, I would love for when humanity’s time has passed, and all that remains are the things we’ve left behind, that intelligent life would eventually discover our planet and try to piece together who we were and happen upon our new album. Then, their alien minds would get wrecked listening to what they believe is the sole representation of the music of planet Earth. Fuck yeah! For the time being though, I can settle for the new release introducing us to new audiences that dig what we are doing and want to be a part of the journey.

Does anyone ever unload on this question and start cursing out the other band members? In all seriousness, we are how it should be. We have been friends for a very long time. One of the most difficult things is creating art that you’re proud of and dangling it in front of the people you collaborate with so they can pick it apart and bring it to its full potential. There’s a lot of trusts that goes along with that. I think a good analogy is that one of us will create the soul of a song and the rest of the members make the body that carries it. There’s a lot of letting go that takes place. You have to trust these people to help manifest your vision. If you fuck it up with dumb band politics bullshit, everyone suffers. But if you trust your band and let them do their thing, your finished product will be more than you ever could’ve imagined. Or they tell you your soul blows from the get-go and you sulk a bit then move on to the next one.

We have an absolute blast writing lyrics. Usually, we all sit down together and come up with some crazy epic tales that spiral into absurdity as we feed off each other, or one person will get the ball rolling and the rest of us absurd-ify the idea as it rolls along. For example, on ‘Held In Contempt’, the lyrics to the song Final Entry are a fictitious journal entry from an Arctic explorer / Ernest Shackelton type character who loses his entire crew and discovers an alien creature in an ice cave. So we had a lot of fun pretending to master 19th-century British explorer vernacular and mashing it into some sci-fi story. We try to write lyrics that sound literate and creative while still being thematically metal. Either that, or we sing “Yeah, yeah, yeah” a lot. Nothing holds a vocal harmony like some good, old-fashioned “Yeah”s.

I think the simple answer is yes, metal is iconoclastic. However, I sometimes find that easy to forget just based on the fact that metal is so ingrained in my life that this point that those aspects of it are just completely normalised. I think most people probably get into metal in their teenage years, which is a pretty formative time, and you’re just blown away by this music that ranges from anti-establishment to straight-up Satanism and hits all points in between. It’s just so unlike anything else out there. Then you spend a decade or two immersed in the culture, and you’ll be hearing a Dimmu Borgir song about literally peeing on God and be like, “Yep, that’s what black metal bands sing about. Let’s get some beers.” So it can be easy to forget that like 70% of the world’s population would probably find that upsetting, or distasteful at the very least. I guess once you’re accustomed to the iconoclasm… or iconoclast? Are those words? They should be band names. Anyway, once you’re used to it, like with anything else, there’s less of an impact. But in general, yes, the love of metal as a genre is a phenomenon that I believe reaches out to those whose minds (or at least artistic tastes) aren’t on pace with the majority of society.