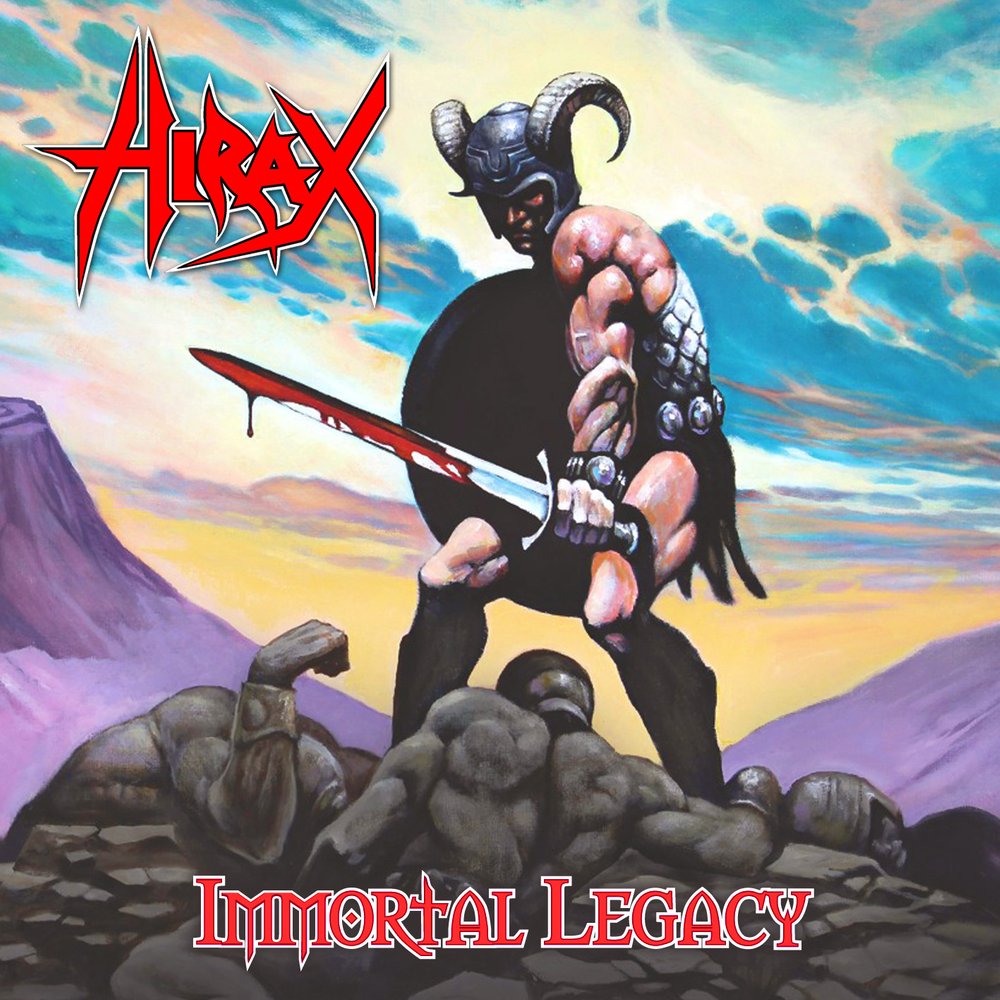 “On our new album we more than ever felt an artistic obligation to our fans to give them a really big-sounding record,” says Katon W. De Pena the vocalist of the American thrash metal act HIRAX.  He is referring to Immortal Legacy, the latest release by his band which – there can be no doubt about that – will cause a definite stir on the international thrash metal scene. “Our philosophy has always been to remember where we come from and stay true to our roots. Our fans know that we will never let them down and that they have helped to raise us up to a level with bands such as Slayer, Sodom, Kreator, Exodus, Overkill, Testament, Annihilator and many others. This record proves that musically we are at the top of our game!”

According to Katon W. De Pena, the reason for this is a line-up which agrees 100% on the group’s stylistic direction and has brought to bear its full energy to make “Immortal Legacy” the masterpiece it is. Lance Harrison (lead guitars) is Katon’s co-writing partner. “Lance is a riff-writing master and a major force to reckon with! Nicknamed the Shred Baron for obvious reasons. He believes in heavy metal 100%.” His younger brother Steve (bass guitar) is an important part of the HIRAX sound: “Nobody plays bass like him! There is a unique sound and bond between Steve and his brother. As a bass player, he is a true musician.” Last but not least there’s Jorge Iacobellis (drums and percussions), born in Buenos Aires, Argentina. Iacobellis is a seasoned veteran who plays with lots of heart and soul. Katon: “The best way I can describe his drumming style is loud and powerful.”

HMA: Greating Hirax and thanks for joining Heavy Music Artwork.

Hirax:  Thank you for your kind words and welcoming us to Heavy Music Artwork on the eve of us releasing our new album.

HMA: “Immortal Legacy” your latest release out on SPV/Steamhammer; what carnage, please explain?

Hirax: Immortal legacy our new studio album will be released by Steamhammer/SPV Records February 2014 in Europe and on March 4, 2014 it will be released worldwide! Our fans can expect one hell of a heavy fast THRASH Metal Record. 100% over the top!

HMA: Would you say that this record stands as thrash tribute?

Hirax: I would definitely say it is pure thrash metal but there are some special surprises and guess musicians (Rocky George – Suicidal Tendencies, Jim Durkin – Dark Angel and Juan Garcia – Agent Steel) who make appearances on this new album, this record will appeal to a wide audience of metal music fans.

HMA: What makes a great thrash record without sounding dated or monotonous?

Hirax: It depends on what kind of sound you are going for on this HIRAX Record we created a really big sound very epic and modern but at the same time old-school raw and ultimately heavy MASSIVE Guitar’s pounding drums and thundering base with the vocals screaming over the top like a sonic blast. We will never compromise and will always continue to carry-on in our tradition of releasing noncommercial music we will never sell out our music is for True Metal music maniacs!

HMA: You have surely achieved great results in your career. Was it inspired by the genre original attitude… “Written for the mosh pit”?

Hirax: We’ve always played the music that we love THRASH Metal we live sleep and eat it our lives revolver around the music the inspiration is our fans they are the reason we continue to work so hard to release the best music/songs possible.

HMA: What sets you apart from other mosh inducers?

Hirax: For the heavy-metal/THRASH metal fans who listen to our music there is no band that sounds like us that is a fact. Obviously if you want to make comparisons you can bands such as Metallica, Slayer, Exodus Testament, Overkill are from the same genre and have similar influences but HIRAX is HIRAX.

HMA: Does “Immortal Legacy” marks a new milestone for the band?

Hirax: Yes Immortal legacy marks not just a new milestone but also a new era in the band’s history and will definitely become a classic in our catalog of music this is our most complex record ever made.

HMA: You have toured quiet extensively in the last few since your reunion in 2000’s, what happened in the ten-year gap? Surely the blood on the stage must have truly missed?

Hirax: There was a brief period of time when HIRAX was in active and I was working behind the scenes in the music business but around 2000 I reform the band and started to write and record new music again, we have been constantly touring and building a big fanbase all over the world the HIRAX legions continue to grow!

HMA: You artwork is really eclectic and clearly defines the thrash movement to its core. Repka and Pushead have made record cover for you. In your experience what make a great record cover?

Hirax: Yes Pushead did our first album cover Raging Violence 1985 on Metal Blade Records and Ed Repka did The artwork for El Rostro De La Muerte (The face of death) 2009 on Black Devil Records/Deep-Six Records for us as a band artwork has always been very important to our records I think the best way to make a great cover is by coming up with a great concept that the artwork fits well with. The art enhances the musical experience. The artist who painted our new record cover “Immortal Legacy” is Philip Lawvere (Kreator Celtic Frost etc.) it is his first oil painting in over 25 years wait till you see what he created it will blow you away.

The best way I can describe the new art is it’s reminiscent of covers done by bands such as Nazareth, Molly Hatchet, Uriah Heap and Budgie it has that classic early heavy-metal feel with Philip own twist on it.

HMA: If you have to give ten of the most obscure head turning record sleeve the word forgotten what will they be?

Hirax: That is an interesting question

HMA: Thanks for the interview and see you in the pit!

Hirax: Thank you for the true metal support The new HIRAX album will be out soon we look forward to seeing all of you when we come to play in your town prepare for the THRASH Attack…