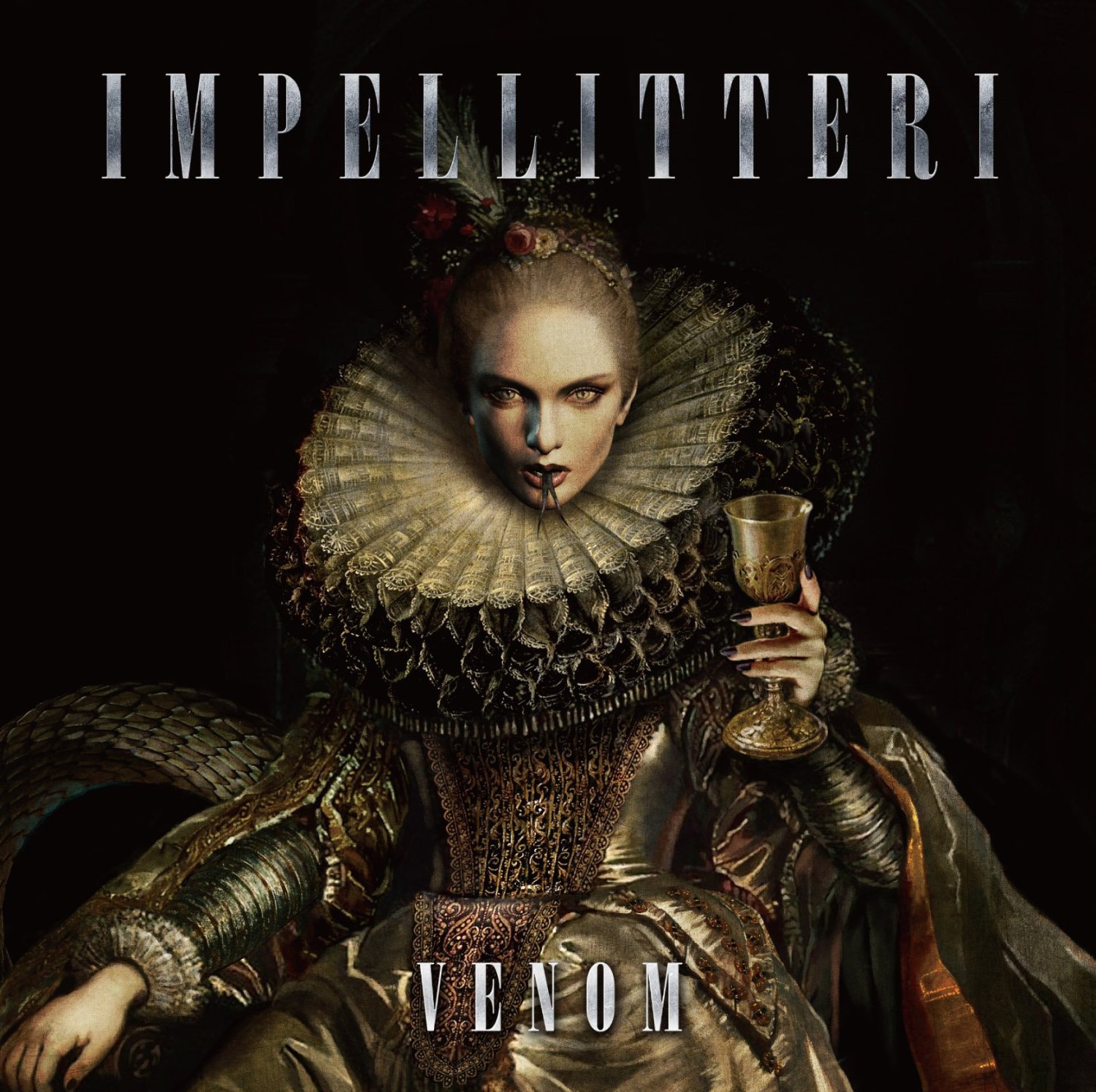 IMPELLITTERI is a heavy metal band based in Los Angeles California. IMPELLITTERI is one of the first bands to combine energetic heavy metal with shred guitar soloing, screaming vocals, strong melody, and big production. To date, the band has sold a few million records worldwide, played to audiences as large as 60,000 people in attendance. The band has a very loyal following of metal fans, musicians, and industry people around the world. IMPELLITTERI has been featured on MTV, VH1, covers of magazines, and continues to write and record records and perform concerts.

Chris Impellitteri: In our case “VENOM” represents our Music. Like a toxin, our music is meant to enter your mind, body, and spirit in an aggressive manner. Attack your soul, and hopefully energize you to the point of euphoria!

Regarding the artwork cover: The Queen who holds the chalice filled with VENOM is the vehicle of temptation. It is her intent to first seduce her victim and then poison them with the VENOM. The Queen represents IMPELLITTERI and the VENOM represents our Music!

CI: This record was very easy to write and record. On this record, we challenged our musical abilities and human limitations. It was very rewarding writing and recording songs like VENOM, JEHOVAH, WE OWN THE NIGHT, EMPIRE OF LIES, NIGHTMARE, FACE THE ENEMY, etc… because each song captures the energy and talent of the band. In addition, each song sounds like it could belong to different eras of Heavy Metal.

Every band member contributed to the writing equally! In effect, the contribution of 4 individual human beings coming together collectively to perform as a cohesive unit really allowed us to write, perform, and record great music. We had a lot of fun recording at NRG studios where bands like SLASH and Linkin Park also recorded their recent records!

HMA: Any songs that stick out the perfectly represent Impellitteri to new listeners and fans alike?

CI: VENOM, WE OWN THE NIGHT, FACE THE ENEMY, DOMINO THEORY, EMPIRE OF LIES, NIGHTMARE….

Actually, every song on this new VEMON record sounds like IMPELLITTERI. In fact, IMPELLITTERI has always written music for our audience without being concerned about whether our music sounds current or outdated. We believe great music is great music.

HMA: Do you feel the artwork is a good representation of your music?

YES! As I explained the VENOM Artwork is truly representative of our musical intent. We want to seduce our audience with our Venomous sound, and create an IMPELLITTERI addiction! ha ha!

HMA: Who made the cover and what directions were given to the artist/designer?

TERU, who is a Japanese musician and artist. He is a fan of IMPELLITTERI and a great artist in my humble opinion. Regarding artwork direction: I initially presented a picture with a Queen holding a chalice filled with poison to TERU and our Record Company. Rob Rock then embellished the picture theme by asking TERU to create a Queen that was a part serpent. I think Teru chose the actual Image and created the proper embellishments which are outstanding!!!

HMA: The cover album for ‘Crunch’ is interesting, could you tell us more about the music and of course the album cover?

The album CRUNCH actually has two different artwork covers. One version is Japan where a city is going over a massive waterfall… The European Version depicts a Military Tank crushing a car. In the European Version our intent was to have the tank represent the music of IMPELLITTERI and the car be the victim of our unruly METAL!..

The Music from Crunch was fast, furious, and added a lot of modern overtones, such as detuning instruments. Many of the songs were designed to be energetic, feature shredding solos, crazy screaming vocals, insane drumming and thunderous bass, whilst also utilizing various loops to give each song a modern overtone…… It was actually a lot of fun to make that record…..but it was a very expensive record to make!!!

CI: I have many inspirations… I always listen to music. Mainly classical, metal, and pop…. yes pop.. ha ha…… Musically I have been listening to a lot of Vivaldi…. He had a very energetic, technical, yet memorable writing style that is very influential to me.

Music in itself is my inspiration. I play my guitar every day and something beautiful always comes from my hands and instrument that inspires me!

Venom is out now on Frontiers Records