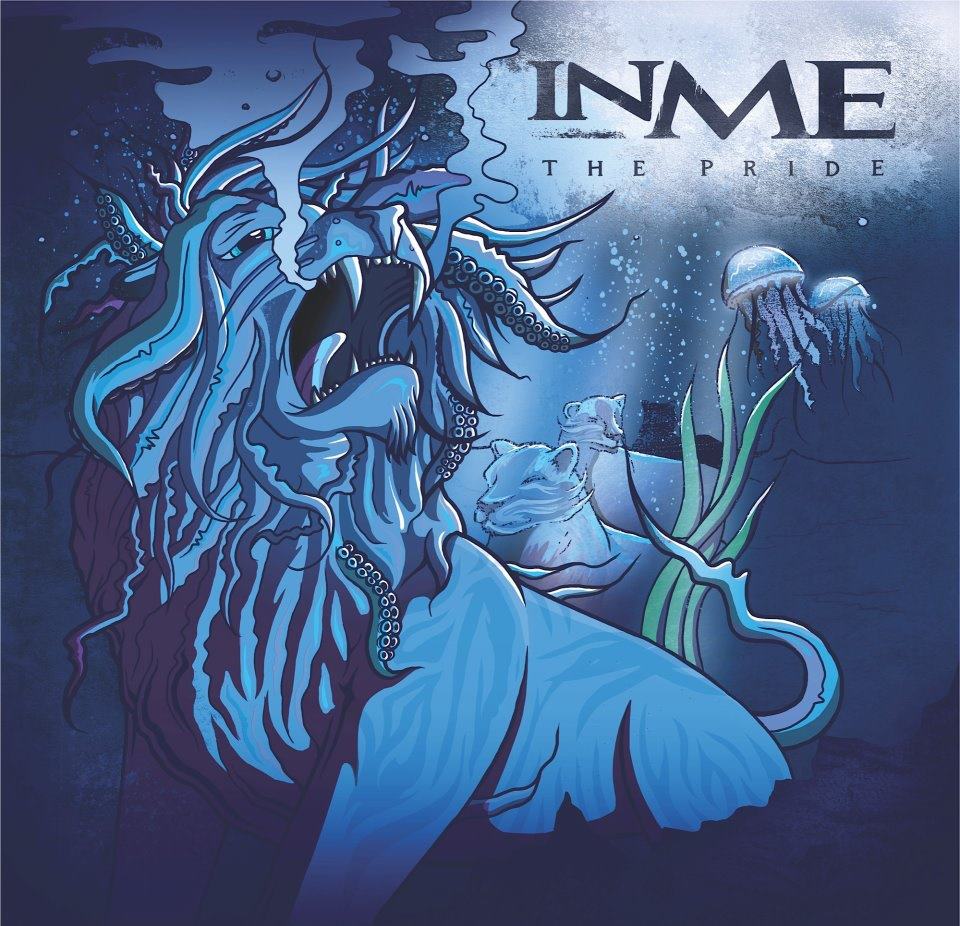 Dave Mcpherson is a wee 31-year-old, and already a veteran musician of 18 years. A prolific composer and lyricist, he fronts the alternative-metal (sometimes) band ‘InMe’ as well as performing as a solo artist, and with the ‘other’ InMe band – ‘Centiment’ (described as some sort-of electronic tech djent thrash rock prog thing!). He wrote 365 songs last year, averages 200 live performances a year, and still managed to find time to squeeze in a natter about InMe’s latest offering – The Destinations EP – and their upcoming triple album. Heavy Music Artwork caught up with him on tour…

HMA: How are you doing? How have your shows been so far?

InMe: It’s been fun; it’s been a holiday really. As you can probably tell, I’ve got the rock ‘n’ roll throat so I think we’re gonna do days off next time…….I need to do a fitness thing. InMe is a fitness thing – an hour and a half of running around sweating, proper cardio, and then when I come off tour I don’t do an awful lot. I’m anti-football – I played football this year and really enjoyed it. Swimming used to be my thing but maybe I’ll get into football instead.

HMA: For the people who haven’t heard the Destination EP yet, what can they expect to hear from it if they aren’t attending the shows? Compared to your other albums like Moth, and The Pride as well?

InMe: It’s mainly an amalgamation of bits and bobs from our previous stuff but it’s just very soul-based, very melodic; not quite as metal as some of our earlier stuff because I now do the Sentiment thing. That fulfills me in the metal department. It’s rocking and it’s heavy and it feels a bit more mature; a bit more of a progression. There’s a song there called Beached Whales. It’s a song like nothing we’ve ever done before. It starts very mellow and sort of …

InMe: Yeah, all four songs are completely different to each other.

HMA: You released this EP through Pledge Music?

HMA: You’ve also released a few other albums through Pledge Music. As you said, you’re doing Centiment as well…you did like a little tour in February, so why did you decide to go with Pledge Music again for this EP?

InMe: Well we don’t have a record label so it’s a pre-order. People would buy it two or three months before they get it. That funds it. But you give them loads more than they would get if they just bought it a general release. It works both ways. We’re not like millionaires, so it’s nice to have something that essentially funds our music, funds making the video, helps us with touring because you have to pay for the van upfront and costs like that, pay for hotels…. It’s sort of a medium that perhaps works in this current age for artists. It is a struggle. Everyone’s feeling the pinch and …

HMA: There are people that do it on YouTube and get discovered that way, so is this a way to get help towards the creative process?

InMe: We’re lucky enough to have really, really cool supporters. I think that they understand they’re gonna get more. We’re going to do, later in the year, we’re going to record White Butterfly, the second album, live in its entirety and just give it to them. They don’t just get the EP. They get maybe 50 additional bonus tracks and stuff that no-one’s ever heard.

HMA: What drives you to perform and make your records? Is it the generosity of your fans, is it a ‘give something back’ tour, or is it something you want to do, because it’s something you haven’t done for a while?

InMe: Essentially, we only do things we wanna do. We wanted to tour. We’re doing a triple album in 2015 and that was taking a while – it’s a big ole puzzle to piece together so, we needed an excuse, and we’ve never done an EP before. Greg suggested that and I just got working on it in January, and then here we are. We’re gonna disappear for a while after this. Next year we intend to be a helluva lot busier than we have been.

HMA: Is the triple going to be like your next follow-up album to The Pride?

InMe: Yeah. Maybe like April or May next year… I’ve got to get working on that. I’ve got to do a solo album and I’m going to record that in the summer and then release that in October-time. And maybe January or February we’ll launch … we don’t know quite how we’re going to launch it yet, to make the triple album thing happen. It’s quite a lot of work. It’s a ten song rock album, ten song atmospheric sort-of ambient album, and then a ten song metal album. There’s a deeper concept than that. All the pretentiousness will be revealed nearer the time.

HMA: The title of the EP is The Destination. How did you come up with the title for it? Is it something like you running towards it, or is it like the destination where you wanted to be right now or …?

InMe: I suppose like I say, the Trilogy is the destination. This is a bridge towards it. It works for the tour because we go to all these different destinations, but also each song has a common theme; apart from one song every song mentions destiny and destination, where we’re trying to get to.

HMA: All the songs are kind of related to the title?

InMe: Loosely. They’re all about completely different things, but yeah, destination seems to be the theme that popped up.

HMA: How did your album cover come about? Was it something that you had input into, did you just give it to people to come up with, or is it a mixture of all ideas?

InMe: It was a last minute thing. We had something in place that we didn’t feel was quite what we wanted. It was quite a rushed affair to be honest; then we just contacted Jim Vickers who’s done the ‘Pride’ artwork and done my two solo albums, and all my merchandise designs. Within 48 hours he came back and, there’s a song called Driftwood Figurines so he used that as his inspiration. It’s really cool colouring that we hadn’t used before. He basically just creates images that are quite striking and a bit ambiguous. We don’t really know quite what it is.

InMe: Centiment’s looking at one thing that I can’t announce yet, in case it doesn’t happen. I’m doing the Download Festival, a solo, playing the 2000Trees Festival. I’m playing something else I can’t say. It’s going to be a secret set. I’m playing a festival in October, called Enchanted Festival, which is my friend, Gavin’s – he’s created that one, with Dan Reed …of the Dan Reed Network. He’s an awesome guy. Doing that, and recording solo, which is going to be really minimalist. Just me, vocal, and acoustic guitar; nothing else.

HMA: A lot going on in the summertime.

InMe: I just moved house as well. There’s lots to do there, lots of carpet to strip and wallpaper to strip…

HMA: The lifestyle of a rock star. You can’t help it; these things need to be done.

HMA: How did the idea of this album come about when you’re writing the songs? What’s your train of thought when you came into writing this? Did you know what kind of album you wanted?

InMe: I did a thing called The Good People Movement 365 last year, wrote seven songs a week for a whole year. So I’ve got a 365 song album. I just listened through that when I was on the train or whatever and I’d jot down the bits that I thought were really strong, and I wanted to work on a little bit. I just sat down with my acoustic guitar…. It’s not quite there yet but it’s pretty much written. It’s just a very reflective, personal album.

Dreamoirs, my second album, the album I did last, solo, was pretty – big. It has orchestration all over it; drums; bass; massive choir vocals and everything. I just wanted to… it just felt right to play the other way and try something really minimalist; just a man, in a room, with a guitar on, singing. Yeah, I’ve still got to work on the lyrics, my favorite parts, and sit down in a quiet pub garden or something and just making everything work. I’ll be working with Mike Curtis (Producer) probably again in August. I’m excited about that.

HMA: Good. The final question we have for you, what made you want to start with InMe? You started as Drowned, which not many people know and you did quite a lot of cover songs. There are songs online where you did covers of Nirvana and you did some Radiohead as well…

InMe: I’ve always been into music because of my dad. My dad’s side of the family is incredibly musical. My nan used to be an Opera singer; my dad’s a really good pianist. He was always putting on vinyl, or putting cassettes on in the car when I was growing up. So just from a very young age, it felt like something that excited me and has never, ever become boring. Greg’s very musical as well. Just being around it, it’s sort of an outlet for me. I didn’t really fit in at school… It was my hobby. It’s still my main hobby. I just love music. I love the exponential snowballing of ideas. Some people get frustrated because they get ‘writer’s block’. I don’t really get that – I’m constantly working with ideas.

HMA: You’ve constantly got something in your head that you can write down.

HMA: Your show tonight, who are you on with?

InMe: Oxford Thief is bloody awesome. Lovely people, great band: No-nonsense, straight-up hardcore rock, with a bit of metal. Red Paintings are surreal and sublime, amazing music but a crazy, crazy show. People paint during the show, on stage, to the music, in costumes and stuff. We’re on at 8:30 until 10 because it’s a club night and everyone’s feeling the pinch like I said. And then we’ve got an after show at a place called Surya.

HMA: Are you looking forward to that (aftershow)?

InMe: Yeah, but like I say, I just got this new house. We moved on the day I went on tour so I haven’t had a chance to actually test out the house. I’m looking forward to opening my front door for the first time and getting into my bed, and then waking up and doing a bit of gardening.

HMA: Well, thank you very much for taking part.

InMe: Thank you very much. Nice one