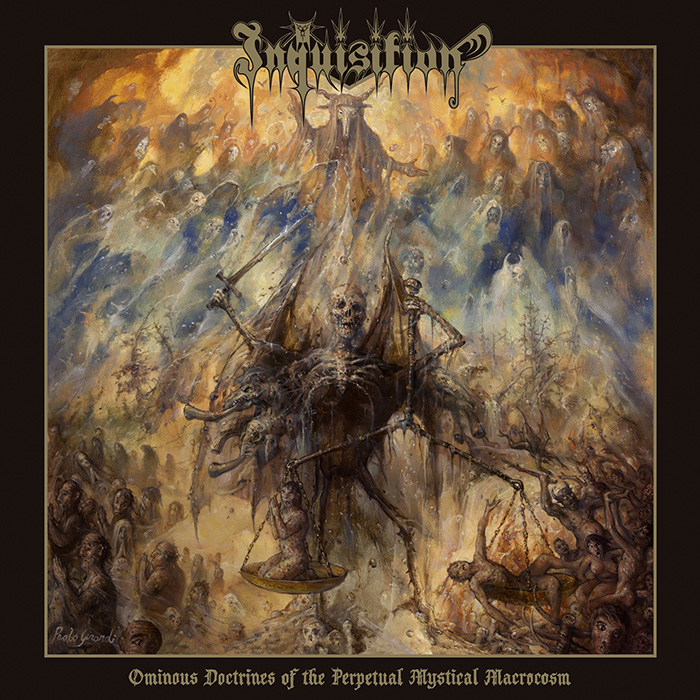 INQUISITION have unveiled the new artwork for the reissue of their 2011 masterpiece ‘Ominous Doctrines of the Perpetual Mystical Macrocosm’. The American black metal icon reveals the concept behind Paolo Girardi’s paintings.

INQUISITION ODPMM
All INQUISITION reissues, which are exclusively released via Season of Mist, come with new artwork by Paolo Girardi. The renowned artist already created the cover art for the US duo’s latest album ‘Obscure Verses For The Multiverse’ (2013). The original artwork will be included each time as well. Girardi’s covers are part of an overarching concept and should be seen in conjunction.

INQUISITION’s infernal concept goes back to an idea of Season of Mist CEO Michael Berberian and is based on medieval altar painting such as the triptych ‘The Last Judgement’, which is attributed to German artist Hans Memling from the 15th century. Paolo Girardi echoes its composition of a central painting flanked by two outer wings and their backsides in the five cover artworks of the reissues. Yet instead of the celestial Day of Judgement, the Italian adapts the original motif to the black metal context. He depicts a scene from the pits of Hell. The souls are now being weighed by the Angel of Death instead of St. Michael the Archangel, and none are being led by St. Peter to the Gates of Paradise, but those not rising to worship the Devil are convicted to flame and torture.

INQUISITION triptych open
The “open triptych” is shown above. The “backsides” of the “closed outer wings” depict demons that are clad in the ornate of cardinal and bishop – in place of the benefactors on the original altar. And yes, we are cheating a bit with the dimensions in the picture below in order to explain the purpose.

INQUISITION triptych closed
Paolo Girardi states: “I will put ‘my own sperm’ in these paintings, as always. This opportunity, this path gives me the possibility to dive, breathe, live inside my roots; handing them down to nowadays’ people. It’s a deep emotion for me being part of past, present and future, all in the same time. INQUISITION’s spirit is the same: tradition, roots and avant-garde at the same time, never forgetting our natural, earthly, temporal, passing… human limits. This is how I ‘see’ our collaboration. Time and space: they disappear when you feel as one with your path.

This is a challenge and a deep embrace with my old masters. I don’t want be compared to my masters, they will always be my masters. This is just a tribute to the example. they’ve always given me. For the triptych’s concept, I just join the feeling, the Weltanschauung of times (fear, terror, pain, salvation) with our actual way to see reality. A formal, aesthetic experience that ‘touches’ and involves my deepest , irrational part. So it includes my, our way to percieve reality around us.”