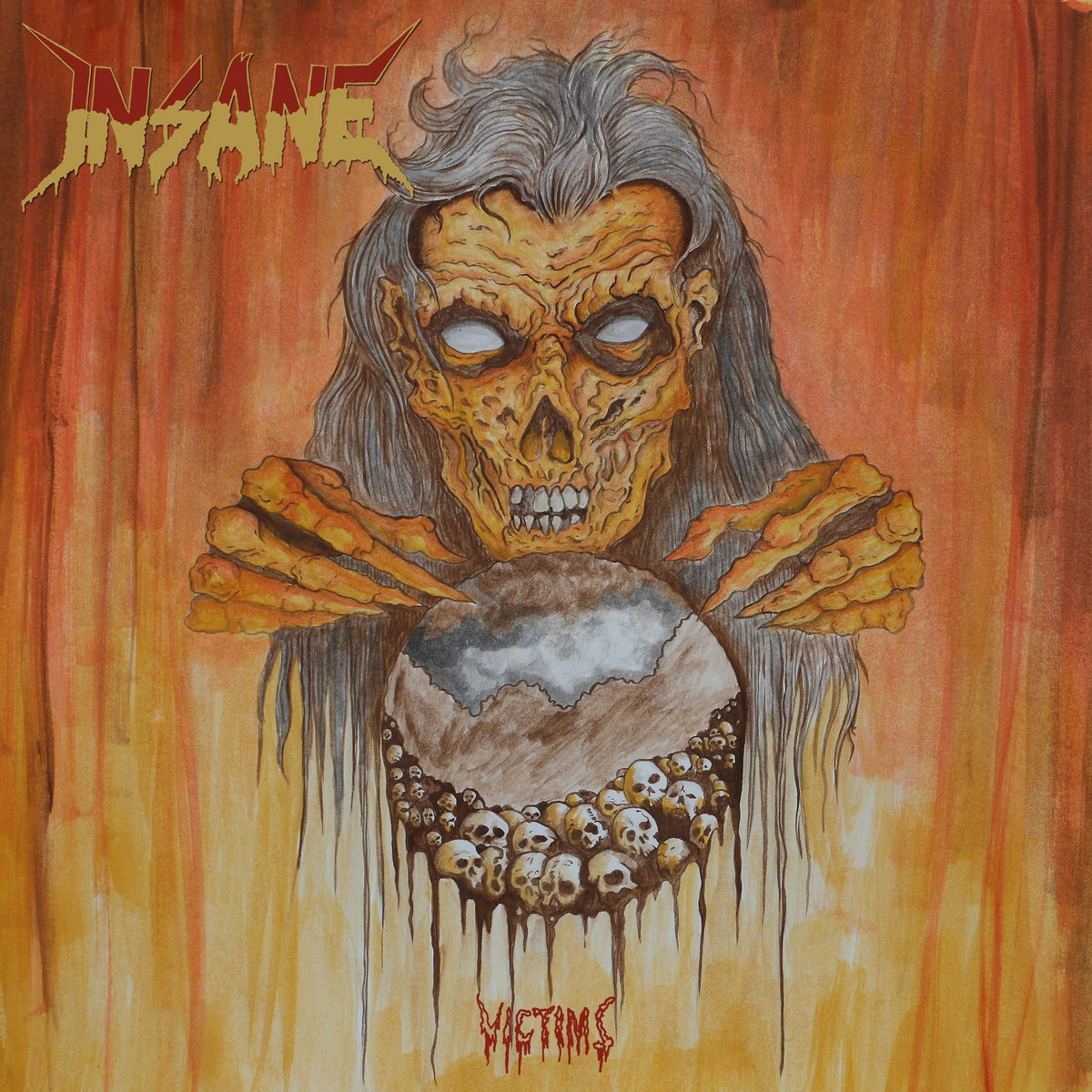 Erik Kristhammar: Something’s wrong in the small Swedish town of Kristinehamn. In 2009, the four bloodthirsty killers in Insane began terrorising the underground with a slew of demos and EPs before committing their first full-length offence with ‘Evil’ in 2017. And these boys have a criminal record, with past and present associations ranging from Witch Blade and Avskum to Nattramn and Blues Pills. Now, with help from Dying Victims Production, INSANE has struck again. Their sickening sophomore album, ‘Victims’, cuts ten tracks of remorseless thrash metal straight from the cadavers of classic bands like Possessed, Iron Maiden, and Mercyful Fate. So, lock your doors, bar your windows, and for God’s sake, cover your ears. Because ‘Victims’ is sure to turn anyone who hears it into a homicidal maniac.

Some of the songs on the new album Victims were written a few years ago, but most were written and finished in the first half of 2020. We had a few months of really intense writing and rehearsal sessions in the spring and summer of 2020. These sessions were very inspiring, and we had a creative flow. We wanted to make a record that was more thought through and built up as an album right from the start, compared with our first album, ‘Evil’, which was more random songs. On Victims, everyone has been involved, and everyone has contributed with their skills, personalities, and music preferences.

Gustaf Hellberg: On Victims, we have centred the lyrics around Swedish murders and other crimes. There is an actual crime behind every track on the record. However, the lyrics handle different aspects of the crimes in each song. Certain tracks refer to the criminal himself or herself and the cruelty in the act committed. Others are about the actual victim of the crime, whilst others question how we as a society can let this madness happen. So, in conclusion, there is a mixture. But all lyrics refer to the cruelty of humanity in our earlier releases.

Nowadays we plan the future maybe more than before since we live in different cities and have several bands and other boring day-to-day stuff to handle. In that sense, we usually discuss ideas and riffs. When we have time, we start jamming, and when we have a few sketches of new songs, some titles and other ideas for an album, we begin to plan more exactly when and how we want to enter the studio. At the moment, our plans are very unspecific, but we aim to start working on new songs pretty soon.

When it comes to recording, we have done almost all our previous recordings on our own. But on Victims, we worked with Jamie Elton (totally the best guy), and the sessions we had with Jamie were very nice. He had some great inputs and ideas that contributed to the final outcome to a great extent. He also definitely understood what sound and atmosphere we wanted to create on this album, and we are very satisfied with the production. We recorded most of the instruments live, and the album has that very organic and rehearsal vibe over it, which is something we have aimed for on previous releases but never really managed to capture.

Gustaf Hellberg: We are a band of four individuals with widely diverse preferences of all aspects of life. So when making music, we always put our different touches on what we do. The fact that the album centres around crimes are probably, in my opinion, because of the marriage of our interest in horror and occultism together with political opinions and other fundamental freedoms in a democratic society. Therefore, it was interesting to try to illustrate different aspects of crimes in the lyrics. Some lyrics are clearly written to be horrific or uncomfortable to read, while others are written to illustrate that even when the physical bruises and wounds are healed, there may be a void and depression lingering from the perpetrator.

Erik Kristhammar: It started with Kiss. I was very impressed by their makeup, blood, and intense live performances that I watched on DVD and Youtube. Eventually, I found Iron Maiden, Metallica and Slayer and I guess it was Ride the Lightning that got my attention to the darker and extreme stuff. The first time I listened to the song Ride the Lightning on my brother’s MP3 player, I was so surprised about James’ vocals that I thought it was a different singer (I had only heard Reload and those records at the time). I got really curious and started to dig into those old records. Today, Ride the Lightning is still one of my top favourite albums. It is such a heavy record, and it totally changed my view of what metal is about.

Gustaf Hellberg: Also, for me, Kiss was a life-changing event. But it started with my older brother showing me a Swedish heavy metal band, HammerFall, and the new album ‘Crimson Thunder’. It was heavy and melodic, and my people (read kids) around thought it was strange and too rough, so it was quite an identity mark for me, being seven or eight years old at that time. When finally finding Kiss, I knew I wanted to be just like them, making records and touring the world. And then it gradually, as I became a teenager and started to hang out with Erik and the other guys in the band at that time, started to centre around heavier and, most importantly, faster stuff.

Erik Kristhammar: For me, music is the most important thing in life. It helps me through the day. I always think about music, and I terrorise everyone with discussions about the best records or new interesting bands that I recently found. I have felt this way for as long as I can remember, and it is hard to say why. I do not want to speak for anyone else. Music is personal and how it affects peoples’ lives is up to each of us to think for ourselves.

Gustaf Hellberg: I will not be that diplomatic. I think music is a spiritual experience, and everyone disagreeing has not understood it fully! No, seriously, there is something special about listening to a really great record. Even if you are not into metal stuff, that adrenaline runs through you just when the part comes that grooves. You cannot stop feeling the beat in your body. That cannot be something that only some people get, and it has to be something you can learn to feel. At least I hope so because without that thing, may it be spiritual, life would be as grey as Sweden in November. And that is not a good thing, believe me.