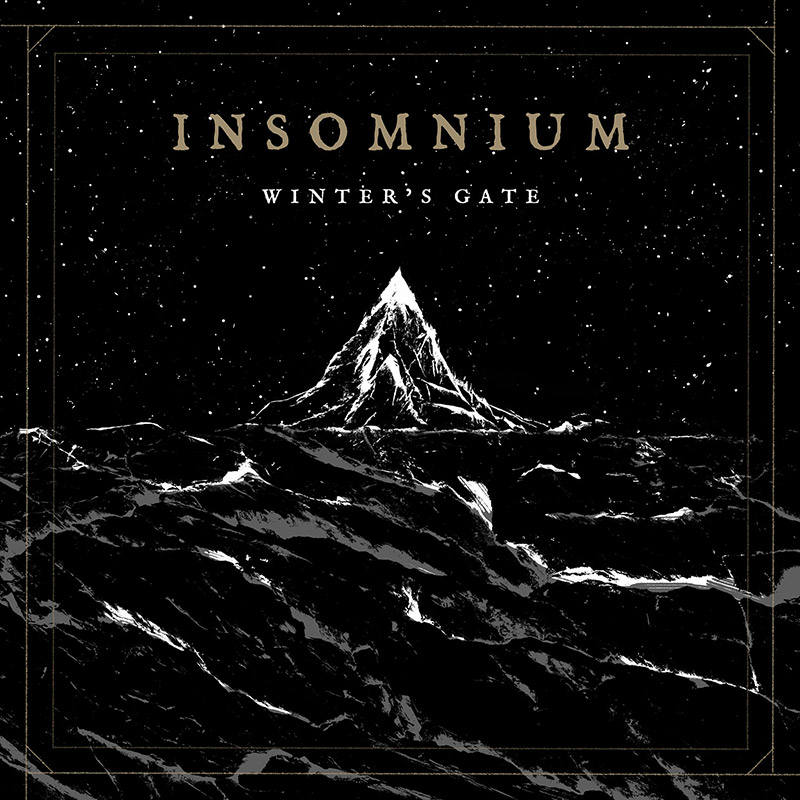 ‘Winter’s Gate’, the seventh studio album of Finland’s melodic metal Insomnium. A bold concept album ventures into yet unknown dark territories as it consists of one epic 40-minute song that is forged around an award-winning short story written by the band’s vocalist & bassist Niilo Sevänen. The album draws inspiration from history and the rich Scandinavian mythology. “It’s a tale of a group of grim Vikings who set out to find a fabled island northwest from Ireland – even though the winter is already drawing near. The three narrators pull the reader in to follow the unfolding of the story from different perspectives”, Sevänen comments.  Musically ‘Winter’s Gate’ immerses deeply into stirring abysses of melancholy, but as it’s the case with every Insomnium album, new elements are brought in to widen the spectrum. The band has always had their own unique way of making melodic death metal but now they are venturing deep into the realms of doom, progressive and black metal. All the varying elements are woven together into one captivating opus that follows the dramatic arc of the story. It’s a rich album full of different atmospheres and emotions; full of overwhelming, gut-wrenching and masterfully crafted music.

HMA: What made the band decide to go for a single epic 40-minute track? I would imagine there is a single track title which is the title of the album ‘Winter’s Gate’?

Niilo Sevänen: I think we first had this idea of making a really long, epic song, and already when we were rehearsing the songs for our previous album, “Shadows of the Dying Sun.” At the rehearsals, we were listening to Edge of Sanity’s “Crimson” album, and at that point, it came to our minds that it would be cool to try something similar. At that point, we were busy making this previous album, so we forgot it for a while, but then we returned to this idea shortly after we had finished the “Shadows” album. At the same time, I was thinking, “What should I do with this old story of mine?” For some reason, I started thinking, “Should I translate it to English?” At least, some new fans would be happy to read it, probably interested, and at this point, I think these two themes kind of clicked together, and I thought that it would be really cool to make an Insomnium song, a really song out of this story … That the atmosphere, and the mood, very dark, a very cold story, would fit Insomnium really well. I talked to the other guys, “What do you think about … Should we try something like this? Let’s have a book; this real long song is going to be something really special …” At that point, we got it translated to English, sent it to our record label, and they liked the idea, they liked the story, and they showed the green light, and told us, “Okay, let’s do it! It sounds very special, and it’s going to be cool!” That’s how we started the whole thing.

HMA: Is there a common lyrical concept in your music?

NS: Generally, our lyrics are dealing with very universal topics, like love and death, for example universal topics, I would say. Of course, for this album, it’s based on one single story, so it was a bit different. Different to make, and usually we always do the music first, and then start thinking, what kind of story will fit these melodies, but now it was a bit the other way around. We first had the story; it kind of set the mood for the whole thing. It’s kind of cold … Cold and dark, and I think that’s the one reason why there’s so much black metal-ish vibes on this album. We just felt that this story needs this kind of approach.

NS: The process was, in the end, really challenging and hectic, because of the deadlines. In the paper, we had three years between the albums, but in practice, we were touring all the time, so there was not so much time to sit down and compose music. Again, the deadlines were coming near, and in the end, we had even a few hours before the latest deadline, and the master was delivered. We were working on the songs even in the seven to eight thousand tons of metal crew in the cabin … Would prefer to be in the [inaudible 03:41], but we were speaking and doing some music there. Other than that, the studio session was really easy, and everything went really easy. We never practiced, even one time, with the band for “Winter’s Gate,” because we simply didn’t have the time. Like I said before, it’s a pretty nice album, as it arranged in What’s Up, and SMS, and Facebook chat … It’s pretty interactive. We had to use modern chatting technology as we weren’t present so much. Me and Niilo were having only one session together, and other than that, everyone was working on their own. Solo albums, combined into one.

NS: When we started thinking about the artwork for the album, I think we first thought about the book, and how to illustrate the book … What kind of pictures would look good on a page of a book … We started from that, and we chose this artist, Teemu Tähkänen, a Finnish guy, living in Tampere. We had done some shirts with him before, so we knew him, and liked his style. I think we wanted to have something minimalistic … Pretty simplistic stuff, black and white, that would fit the book and would fit the mood of the story, I think.

HMA: Lastly, can you talk about your artwork concept?

NS: One thing was that we didn’t want to have Vikings in the pictures, because we’re not a Viking Metal band, and plan was not to turn into Viking Metal … It wouldn’t fit Insomnium. There are no warriors with swords, or anything like that in the pictures, but it’s something that we thought would fit our style, and how people see us. I think the artwork turned out to be really good … It’s one of my … Personally, one of my favorite Insomnium covers, this mountain, and the icy ocean … It looks really cold, and it sets just the right kind of mood for the whole thing. We’re really happy with the artwork.