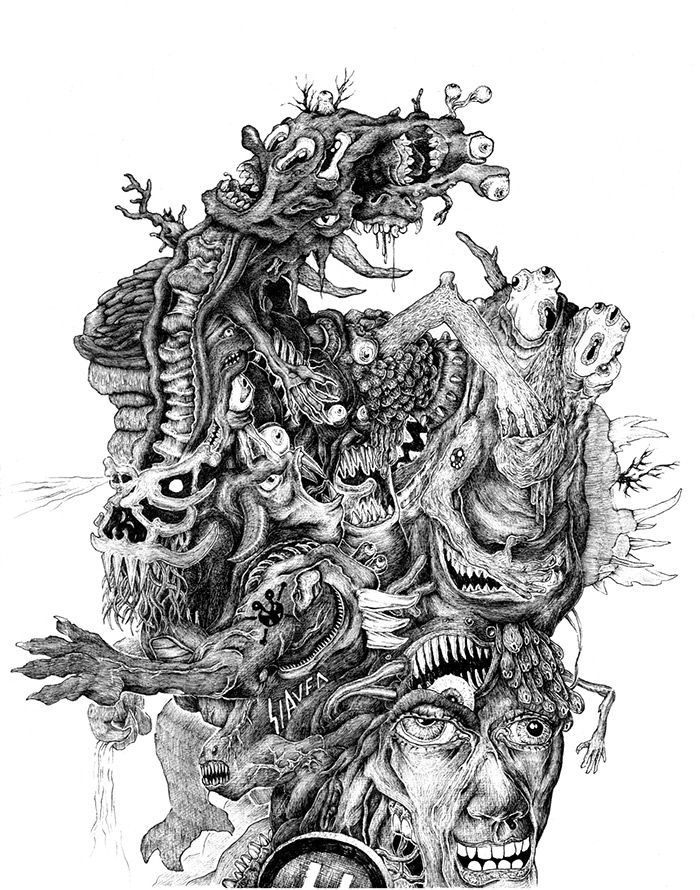 Swimming in the pool of creativity

I’m was born in France 1974. I discovered rock ‘n’ roll soon after that with old heavy metal records (Alice Cooper, Uriah Heep, Deep Purple, etc.) and then with punk and thrash metal. I started drawing around the same time or just before. I’ve no art school background, I have learnt by myself and by copying past artists. A mix of Kruger, Seagrave, Repka and Sci-Fi/horror illustrations, plus a certain amount of medieval & Renaissance art. I come from a provincial part of the country so I don’t have many connection with metal bands. I have done some work for local punk bands. I was and still am unsatisfied with my work that I felt like not asking bands to use my work. This slowly evolved and I finally started making art for other genre, including hardcore techno underground and experimental music. And of course I did a lot of artwork for my own metal collection, sometimes creating bandnames just to make things looks better.

Eight years ago I found a large studio. I started working harder and eventually published many works of international underground artists (by Le Garage L. publishing and Alkom’X zine). This gave me a lot of motivation. Internet helped to escape French countryside. Now peoples ask me for artwork, mainly for books (zines), some for noise/experimental scene and metal bands. Last year I was invited to work for Gohelle festival (north France), which was my first official step into metal art world. Seeing my stuff hanging near Obituary, Carcass and Entombed was something. At the same place I met Great Dane Records owners who asked me to do a cover art for Mercyless live CD. I also met others peoples who discovered my work as I was mostly known in artzine world. Did some for Finnish death metal band Assatur.. That’s how I realized that my stuff wasn’t so bad after all.

I don’t look at myself as a traditionnal metal designer, my style is a mix of various influences which include underground comic and lowbrow art. Many peoples in this field think that I’m doing metal art. Most of the time I’m credited “old school hardcore” which satisfy me as I’m really touched by underground stuff. Look at old Sacred Reich records, or Bernie Wrightson, even Dan Seagrave very young, Kent Mathieu. I’m more influenced by Altars of Madness than by other more detailed artworks. I love Seagrave, Whelan, Benscoter, Petagno, Kruger, Marschall and Dave McKean, Sienkiewicz. But nothing kick designs by Jeff Walker, Winston Smith, recent Riddick or those many talented underground cartoonists.

I try having a regular style for drawing & illustration. That’s a mix of cartoon underground and fantasy. Usually I use pen or ink, making the largest part on paper and using computer for correction and printing files. I also use silkscreen for printing artwork which is something tricky but funny. I widely prefer working with hands for the creative parts. Commissions are various, sometimes 100% free, sometimes entirely directed. Both can be difficult. Freedom is nice but then I wonder which technique will fit the best and so on. Instructions are nice but can lead to a boring result cause I need to take risks in the process. So peoples give me direction, keywords and of course musical and technical specification. Then I make suggestion, sketches, and we choose the best way. It also happen that someone just ask for a drawing I already made, then only final design is left and can be done by the designer.

I wish to consider this work as an artistic approach free of business elements. I choose to have a job (which gives me satisfaction but no freedom) and I do this for pleasure. Working with fanzines makes me happy and being a contributor of this and that. I love music so it’s really wonderful being part of it. I could have spent more time making music but I didn’t so, this is my contribution. Of course there could be money talk but this is not the motivation and usually it’s symbolic.

I’m influenced by many thematics, I mean we have same interests. Horror movies, Sci-Fi & fantastic, Lovecraft, occult art & philosophy. Behind that mythologies and local ghosts stories are great inspiration, while obscure philosophy can be found more or less indirectly in my work. I like peoples who were confronted to the obscurantism, such as Giordano Bruno to quote one of them. Medieval world takes large part, for ideas and for technical aspects. That’s for the past, freshness of art comes by the swimming in the pool of creativity. Just look at what is done nowadays, being part of this active scene which is not yet accomplished but really boiling of creativity. Being a publisher also help keeping the wave!

Inspiration firstly comes from our world. War and pain, disease and cataclysm, sadness and despair. I like looking at your problems and try to express feelings we all have one day, about death, disease or injustice, horror. And of course I get direct vision of world beyond, so that’s easier to make ugly design. Joke aside just imagine that an horrific world does exist near us all, how is it that something normal become ugly, cruel, horrific? War seems so strange when you’re not in, while if you’re in everything seems normal life.

Some cover that define metalart to me? Altars of madness, The Key, From Beyond, Sensorial Treatment, German designers (Tankard Morning After, Kreator Out of the dark, Coma of souls, Sodom Better off Dead, Imperial Doom, Effigy of the Forgotten, Cause of death, Orgasmatron, censored and uncensored Autopsy records, Transcend the Rubicon, Tower of Spite, Death and all ’80s from Repka, Subconscious release by Desecrator or Carnage record, Signs of life by Devastation, Into the grave, Napalm Death early designs, Contamination rises by No return, Swallowed in black by Sadus, Arise & Beneath the Remains, early Slayer, Bigger than the Devil, Bad music for bad peoples by The Cramps, Misfits, recently Endless procession of souls & Burial grounds by Costin Chioreanu… SO MANY !!!

I’m part of many zines around the world including Le Dernier Cri, Komikaze, Novo Doba, Que Suerte, well! Too many art groups & underground publishers to quote them all! Also part of Outlaw printmakers for engraving (US-France group including Tom Huck from Evil Print). And of course my own band with Le Garage L. who publish a lot of actual artists from various groups. I have participated in many books, book fairs and events, collective exhibitions, generally in graphic art field and not especially illustration or metal event.