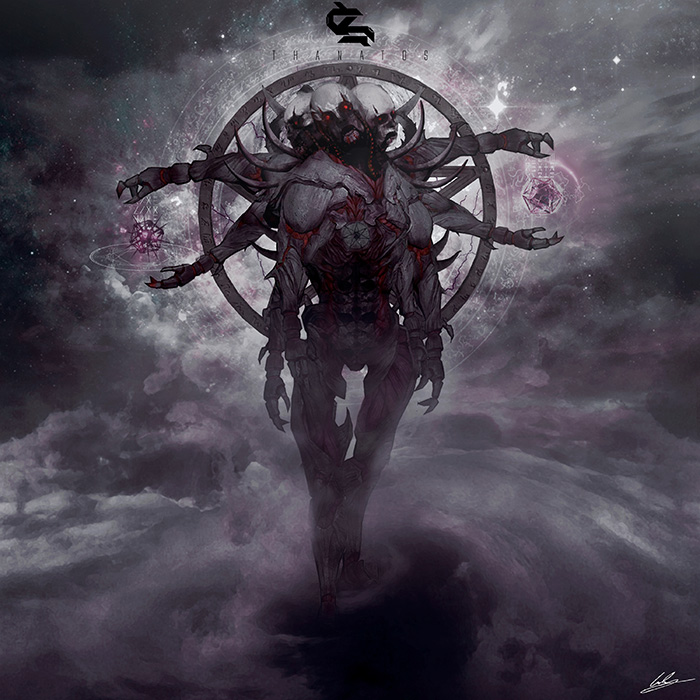 I started doing graphic design about 3-4 years ago in high school for local bands and for my own personal music projects. Eventually I progressed to more advanced styles of art and started working for larger bands outside of my local music scene. I am for the most part self taught but have had a few art and design classes in high school and college. I have also been mentored by fellow graphic designers, Dixon Jong of Intuitive Designs and Steven McCorry of Steven McCorry Designs who have both been a large influence on my artistic style and success.

I was always interested in the artwork that I saw on the albums of the music I listened to. The intricate illustrations by artists such as Dan Mumford and Par Olofsson fascinated me and I always wondered at how they created such masterpieces. One day while showing my friend a few drawings I did in my notebook he asked me if I would be interested in making something for a post-hardcore band he was in. That jump started my career as an artist and a few years later I started my company Caelan Stokkermans Music & Design through a Launchhouse program and began designing professionally. Since then I have been working my way up to the point I am at now.

My artistic vision and philosophy is in essence, creativity and imagination. I am always dreaming up new stories and ideas in my head so art is the medium into which I can release all those creative energies. I always push to create something new and inventive that the viewer can get lost in and dream up new storylines and concepts to. That is my vision for my art and my philosophy is to always keep an open mind. Don’t limit yourself to one idea, concept or belief instead open your mind to all that will help broaden your horizons. I believe that music and the visual arts are the purest forms of expression we as humans can achieve. I think we all have something to share and music and art are the best ways we can show it to other people. Understanding and appreciating the arts is something everyone should do in order to have a fulfilling and satisfying life.

I have always been fascinated with anything that is fantastical and otherworldly. I am very interested in ancient religions, mythology and the occult. It’s amazing to me that humans came up with such creative ways to explain how the world is and actually believed/believe the world to be that way. I also love science fiction and fantasy especially Star Wars and Magic The Gathering. I usually take a lot of the concepts that can be found in mythology and ancient religions and use them in my art. The Ancient Egyptian religion is one of my favorites and I have always been enthralled with their mysterious culture. I like to use enigmatic gods that aren’t apart of mainstream culture in my work and combining them with space and sci-fi themes. I want my artwork to inspire awe in the viewer and the use of such grandiose themes like gods and space do very well to achieve that.

I love to read and watch movies, especially Science Fiction and Fantasy. I draw a lot of ideas from what I have read in books or seen in films. Some of my favorite authors are Douglas Preston and Lincoln Child, J.R.R Tolkien, Joseph Delaney and Christopher Paolini. My favorite films include Inception, The Star Wars Saga, Interstellar and The Hobbit/Lord Of The Rings. I also take a lot of inspiration from other artists, my favorites include; Sarafin Concepts, Par Olofsson, Ola Larsson, Dan Mumford and Peter Mohrbacher to name a few. I play Magic The Gathering as well and the storylines and artwork they have are always great inspiration for new pieces. Mythology from all religions are also a great source of concepts, one of the series I am currently working on is about gods and goddesses from ancient Greek culture.

I am involved in a few art groups and organizations. I actively participate in several online art groups such as Chordal Media, Creative Media Forum and Designer Lounge. I recently started a merch design collaboration with my friend Barnaby Oakley called OakStokk which is featured on his site Crossfade Productions. I am also currently endorsed by Djentspace and Breathing The Core. I also will have the opportunity to intern at Nuclear Blast Records in London this summer which is something I am very excited about.