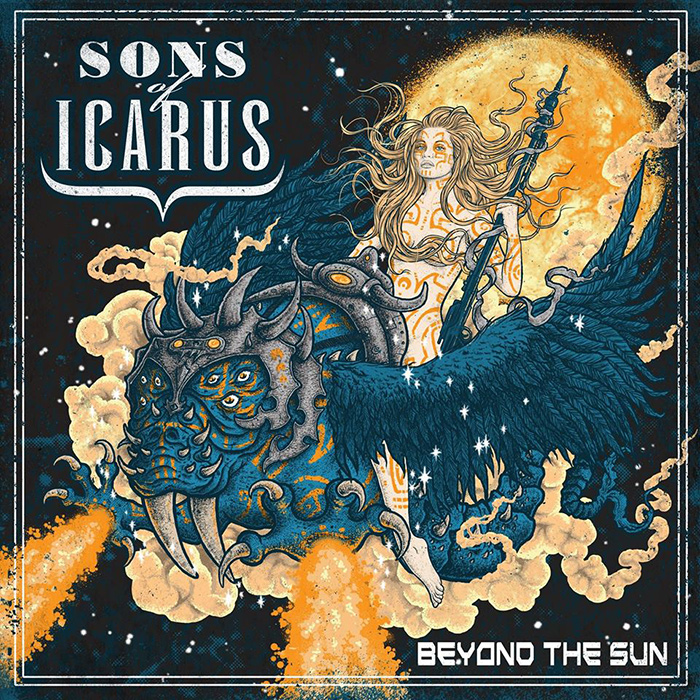 I draw it so you don’t have to

I started off working for bands that I was friendly with such as Manchester’s sadly missed The Freezing Fog for whom I provided the artwork to their last release, the magnificent Challenger EP. I then expanded this by asking friends if they knew of any bands that might need work doing and also be cold contacting a few bands. Since then, I’ve found that once I had a decent body of work behind me, the enquiries started to flow, plus I get a lot of repeat work from past clients, for which I’m very grateful.  I’ve had a lot of interest from the stoner, doom and sludge scene, which is particularly strong at the moment, and also is some of my favourite music so that’s a bonus. I’ve been very lucky to work with a lot of cool people, many of whom I now consider to be friends.

My technique I would describe as pragmatic in that I use whatever I need to in order to get things done. I do like to combine detailed illustrative elements with more graphic styles. I just try to improve all the time and hopefully that comes through. When I first started out I would produce ink drawings and scan them and colour in Photoshop, but that process has changed since I became busier and I now use a Cintiq and ink everything digitally. This speeds things up dramatically, although I must confess I do miss the physical act of drawing and I’d love to find time to do more in the future. It has been too long since I got busy out with some Microns.

I think music and art are perfect partners and have been the two things that have been my biggest interest throughout my life. When first getting into music, I think the imagery was what drew me into certain styles of music, in fact I particularly remember the Pushead cover to the Harvester of Sorrow 12” being something that grabbed me and made me want to explore the music, having never even heard Metallica at that point. I also remember being obsessed with the cover of The Rolling Stones Their Satanic Majesties Request when I was very young, but not sure if I even ever listened to the album!

I think symbolism can be important and when putting together new ideas and compositions I always try to research what certain elements can signify to provide an extra level of meaning to the artwork. So a particular flower might be chosen, or a certain creature. Sometimes this can go out of the window though if the client wants something a certain way, regardless of the wider meaning. I think the occult and religious imagery is something that is a go-to reference for many artists, partly because being into this kind of music, there’s a lot of stuff that simply “looks cool” and also because of the implications of religion. Personally I’m very interested in the impact that religion has on the world, both as an “individual struggle” and also as the wider, often sadly destructive influence on the world.

Inspiration is everywhere. I think I was originally influenced early on by Joe Colquhoun’s illustrations from the Charley’s War comic strips which were surprisingly dark for their intended audience. I also remember being particularly obsessed with the horror themed Top Trumps cards that were around when I was at school, plus the art from the original Fighting Fantasy books. After that it was things like Albrecht Dürer’s woodcuts, Gustav Dore, Van Gogh, Aubrey Beardsley, Mucha, Chuck Close plus skateboard graphics from Santa Cruz, Powell Peralta and Zorlac, and then of course the usual suspects being Pushead, Ed Repka, Dan Seagrave, Michael Whelan, Dave McKean and more recently John Dyer ­Baizley, Florian Bertmer, Aaron Horkey, Rchey Beckett, Daniel Danger, Drew Millward, James Jean, Ken Taylor, Alex Pardee, Jeremy Fish, Jeff Soto… I could go on forever.I’ve had work exhibited at a few events both in the UK and overseas, most recently I was honoured to be a part of the fantastic Noiz All Dayer in Manchester where a number of artists showed their work alongside live performances from some of the country’s best underground bands. I don’t have anything specific planned at the moment, but I’m sure something else will come up soon.