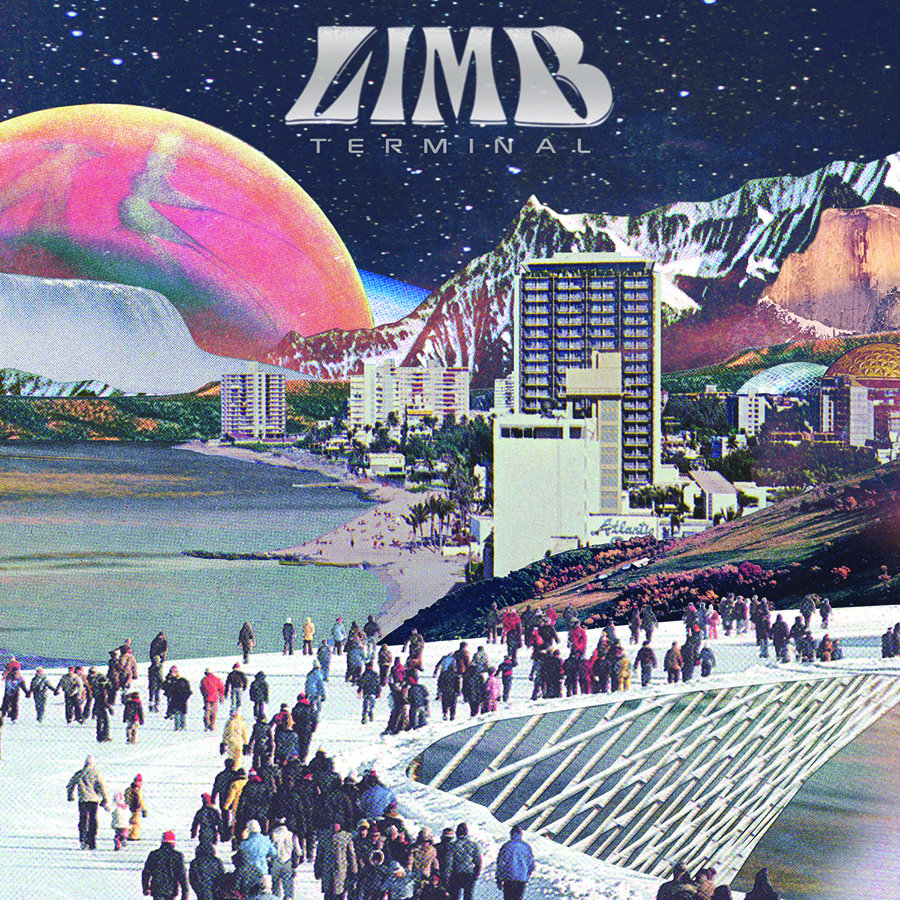 Limb began in a damp and cold basement in the winter of 2011. Within a year, Witch Hunter Records had picked up the band’s self-recorded demo, and it wasn’t long until Limb was invited onto the New Heavy Sounds roster. Recognising Limb’s love of stoner dirge as well as classic rock stomp, Russ Russell dubbed their sound ‘GoatSlade’. Limb combine thick, heavy tones with punchy and nimble songwriting to bring together the best of retro fuzz sounds with modern metal.

HMA: Welcome Limb to Heavy Music Artwork. Can we start by telling us what is the ‘Terminal?

Rob Hoey: Hi HMA! Thanks for having us. Well, Terminal is an album we put together in the middle of last year and then released in September time. We’re really proud of it. It was produced by none other than the wonderful Mr Russ Russell who is well known for producing bands like Napalm Death, Evile, The Wildhearts, Sikth, etc…

HMA: New album on Heavy New Sound, how was did the recording and songwriting developed?

RH: Well we went into the rehearsal room with some initial riff ideas and made sure we all had as much input as possible. At the time we just got our new drummer Tom on board from Uncle Acid and after one short tour with him we were writing so it needed to feel not on it like a writing session but time to gel our newer sound too. Once we finally got to the stage of recording we rocked up to Parlour Studios in Kettering and set about laying down some big noises that luckily Russ totally got straight away and the rest is history.

HMA: The album cover is really unusual, it reminds me the photo collage style of early photography with of course hits of the atomic age of the 40s and 50s. Can you give some details about it? And of course the artist?

RH: Initially, Sam (our bassist) introduced us to the idea of Cur3es when we started looking into who we’d like to get to do something. We instantly loved his work and felt that however, the album turned out thematically he would ride to the challenge of putting something together we’d love (and he most certainly did).

RH: There’s a bit of a reason for that. Although we are big fans of Doom and Sludge we don’t really consider ourselves to be either of those things (well not entirely anyway). We love a bit of Classic Rock and Glam too. Doom is a very big umbrella right now so it’s hard to say exactly what it is anymore. In terms of Cur3es nailing the artwork; it absolutely hits the theme of the record which is mankind’s seemingly terminal mindset for destroying everything it comes into contact with. It’s about the end days and I think the artwork depicts that.

HMA: Your first full length has a more typical doom like the cover. Can you also tell us about it?

RH: At the time I think that’s the path we were on so we picked an amazing artist Richey Beckett who was at the time the perfect fit for what we were going for. Again, we were very lucky to be working with someone who we had absolutely no doubt in. The first album was slower and more sprawling in a more of a traditional ‘Doom’ way and the inspiration for the album artwork came from a song on the album called ‘Vathek’ based on a book of the same name published in 1786 and was one of the first gothic novels… that happens to be written by my wife’s great great great grandfather (or thereabouts).

HMA: On your Facebook about we read under interests “MASSIVE RIFFS, MASSIVE LOW END, MASSIVE DRUMS & MASSIVE LUNGS”. Can you expand on these points?

RH: Oh yeah, I’ll change that! ha. I mean, I think it speaks for itself in terms of what we’re trying for but that might need an update.

HMA: How did you guys get into doom metal in the first place?

RH: I think we all got into it in different ways. Pat the guitarist came through the route of Sleep, Slint, Godspeed You! Black Emperor & Neurosis so more of a Post Rock / Soundscape / Drone bent. Sam likes Fugazi, Black Flag, Deafheaven, Mayhem & The Smiths so that’s kind of a Sludge / Black Metal / Melancholy way in. Tom likes The Answer, Monster Truck, Karma To Burn, Extreme & Mr Big and there is Tom for you! Stoner Rock / Hair Metal. I love Proto Metal like Sir Lord Baltimore, Lynyrd Skynyrd, Ram Jam, Nazareth and Robin Trower.

I do happen to love sludge and doom though, I remember in about 1993 hearing Fudge Tunnel for the first time and then getting into bands like Acid Bath, 3D House Of Beef, Crowbar, Floor & Psycore. Those early super scooped mid-tones on the guitar! Brill. Old school.

HMA: What non-musical sources do you draw inspiration from in composing and arranging your music, and as for the musical sources?

RH: We watch a lot of comedy together actually. Tim and Eric, Cardinal Burns, Steve Brule, Eric Andre etc… In terms of lyrics, it’s mostly interesting articles or books that inspire us to read up on specific points of interest and turn them into songs.

RH: Goatsnake – Black Age Blues, Elder – Lore, Torche – Harmonicraft, Deafheaven – New Bermuda, Napalm Death – Apex Predator.
Those are just the doom ones as requested but there are obviously LOTS more across lots more genres and some are really close to home but we can’t start mentioning them without mentioning them ALL and that’s a long list.

Limb, Terminal is out now on Heavy New Sound and you can get it here.