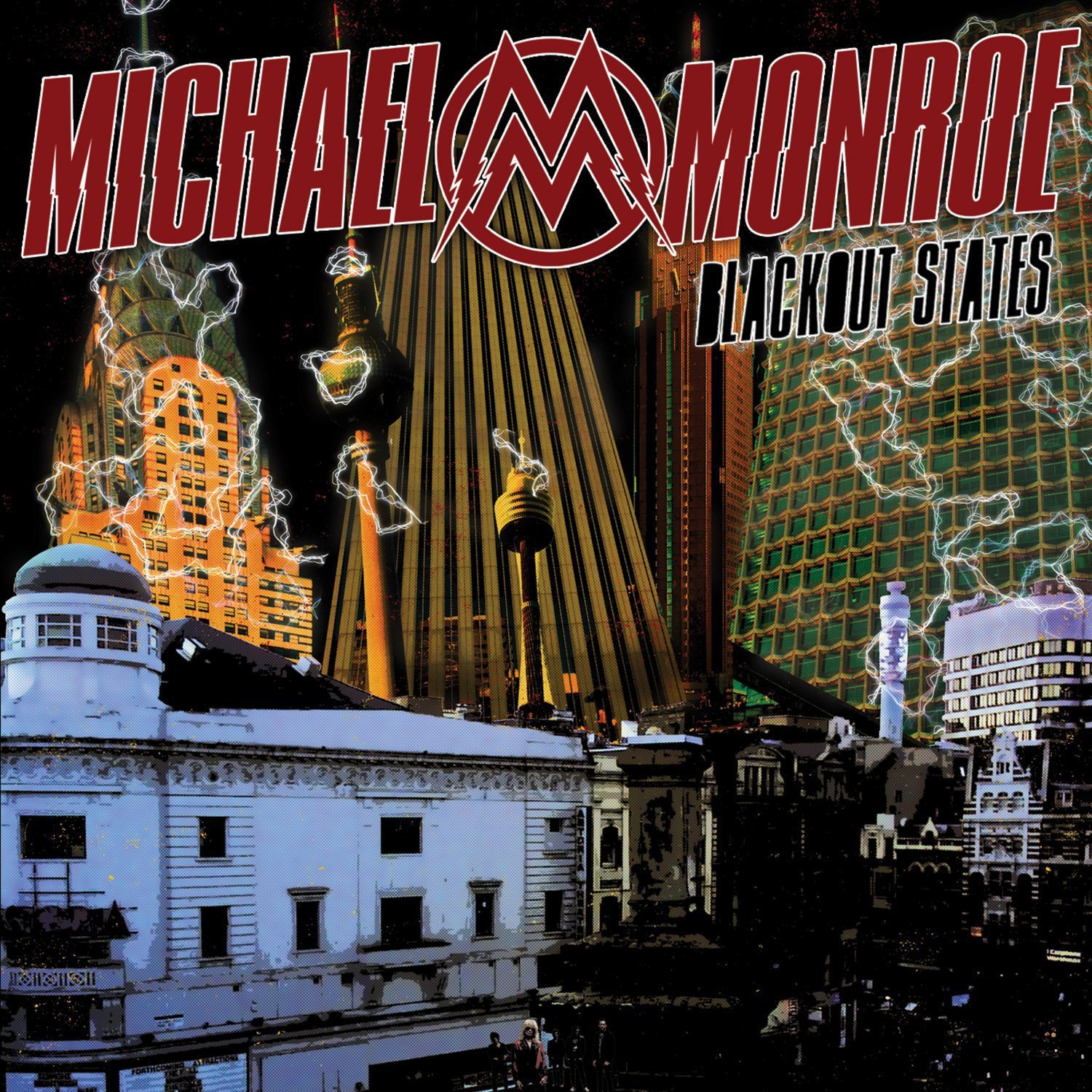 The world of rock has never known a performer like Michael Monroe. He’s the very definition of a rock legend. He’s stood on the biggest stages, side by side with the biggest names and recorded dozens of albums that people have loved and lived with for decades. In a previous interview I did with Michael I shared my personal story with the readers of HMA, describing how I discovered his music and what it meant to me. It’s been many years and I still feel the same way about Michael’s music today as when I was a teen. Being in a room with him for our second interview, I couldn’t help but admire at how much energy he has and how much his recent work suggests that the creative fire is still burning brightly in him. I’ve spent quite a decent amount of time on the LA rock scene and everyone there speaks of Michael with reverence. And in his native Finland (a country I’ve spent a lot of time in as well) he’s achieved the status akin to that of a national treasure. He’s undoubtedly one of the kings of rock music. Now Michael and his lineup of legends are back with a brand new album – Blackout States, which brings with it a tidal wave of the musicians’ memories and experiences of the old days…and celebrates the future.

HMA: Michael, thank you for taking the time to talk to Heavy Music Artwork. Congratulations on your new album. It sounds awesome.

HMA: Tell me about this past year.

Michael Monroe: We spent it working on this record. We played in Finland quite a bit in the meantime and not much elsewhere. It’s great to be able to play new songs and a new set now.

HMA: In the past, you’ve talked about your experiences living in cities like London, Helsinki, New York, and LA. How do you think those have affected you as a musician?

Michael Monroe: You get influenced by everything you see and hear; everything around you and in your life. Every place I’ve lived, especially in New York City, has influenced me. I lived there for ten years and it’s stuck with me.

HMA: Tell me about some of the cities you’ve lived in.

Michael Monroe: I lived in London, I think, four and a half years. Stockholm a couple of years. My first half year there was spent on the streets. That affected me in a good way, too. But New York is the city of cities. Now I live in Finland, the city of Tulku, which is my own choice, and I like it there. Nice and peaceful, and with a positive environment. I have a great flat in the centre of the city with no neighbours really. I’m happy there.

HMA: Let’s talk about the new album. Is Old King’s Road you casting an eye back on your career and your journey?

Michael Monroe: It’s about that, and it’s about today, too. It’s not that nostalgic, it refers to the old days, but it’s not like we’re pining for the past. We’re just really here today and rocking as hard as ever, if not better.

HMA: When I listened to the album it felt it was both like a toast to the past and sort of a salutation to the future. Is that the way you feel about it?

HMA: When you look at your journey so far, what’s the most painful lesson you had to learn as a person?

Michael Monroe: Yes. Keeping busy too. Before we started recording this album my father passed away…

HMA: I’m so sorry to hear that.

Michael Monroe: Thank you. After it happened I had to just pack my stuff and get over to Gothenburg where we were recording.  When we actually started recording that helped me keep my mind off things. At night, I couldn’t but working during the day helped.

HMA: Are you really disappointed by the music industry?

Michael Monroe: Yes, even the record label executives, you can see that when they first start they’re all young and excited. It shows in their eyes, there’s a sparkle there, they’re going to work in music, and then within a year or two their eyes look dead, and the hair starts falling off, and they get fat. I’ve watched people become empty shells after just a couple of years. It’s business.

HMA: I’ve noticed the theme and lyrics of your albums gravitates towards social issues, the importance of compassion and spirituality. Would you agree?

Michael Monroe: Yeah, it’s about being aware of your surroundings and life in general. We’re all in the same boat. All going down with the ship, or whatever. Yeah, I acknowledge the spiritual part. Some people acknowledge it more, some people less.

HMA: Can you tell me just a little bit about the process of just recording Blackout States?

Michael Monroe: This time we didn’t have an opportunity to get together at a rehearsal place. All the guys wrote a bunch of stuff separately. I came up with Good Old Bad Days, it just came to me one night, and I just had to get up and put it down on tape because I would have forgotten it by the morning. That was a stream of consciousness. R.L.F. (Rock Like Fuck), that song came from Sami Yaffa. His working title was Fuck Shit Up so I said, “Okay, Sami… Why not call it Rock Like Fuck and abbreviate it so people have to wonder and look at the lyrics first?”

HMA: Sound-wise you’re very famous for being one of the leaders in the early days of glam, but this sound seems to be a lot more authentic punk rock.

HMA: Dead Hearts On Denmark Street pays massive homage to a legendary area in London. So, it does feel like Blackout States is a lot about roots, origins and where you’ve come from.

Michael Monroe: Yeah, it’s about roots. A lot of people like to associate me with that glam thing. Categories suck in my opinion. Whenever something has a name it’s over in my book. I think everyone should have their own thing, and once it becomes a category then everyone’s trying to sound the same, and it kills creativity. Everyone thinks there’s a formula for success.

Somebody like Nirvana comes out. A great band that really gets big, then there are two hundred million bands trying to sound the same. They’re never going to be as good as the original thing. The glam thing is something else a bunch of bands missed the point about. They play their hairspray cans better than their instruments. To me, it was all about playing great music, not looking great.

I wouldn’t have the nerve to stand on stage if I couldn’t sing or play. The heart of punk is one of the things that most people completely missed. They thought it was all about the partying and fame. Lifestyle, attitude and fashion is not the music. The idea that is in my roots is about being an individual, being yourself and doing your own thing, and telling the truth in the lyrics.

This album had all the right stuff. The London theme … I never planned anything in my life. I didn’t realize there would be a theme to the album. Old King’s Road and then Dead Hearts On Denmark Street, they just had everything we needed, so London kind of became part of the album’s theme.

Under the Northern Lights was written by Dee Dee Ramone in the early ’90s, like ’91 or something. We were hanging out quite a bit, and he said: “Mike, I got some outstanding material, man. You want to do this song? You’re from Finland, right? You ought to do this song. It’s called Under the Northern Lights. He played it to me on an acoustic guitar. I never had a demo of it. I still have his handwritten lyrics for it, though. It was an honour to bring something from the past to life and to officially record and release it.

HMA: It’s amazing, bringing something from Dee Dee Ramone to life like that so many years later. This band seems to provide a lot of creative support for you. You look great, you sound great. Every time I see you, you’re high on energy, so this band and this collective of people you have right now seems to be really good for you. What would you say are your plans for the future, and what makes you click so well with Steve and the rest of the guys?

Michael Monroe: There’s great chemistry in the band. It’s magical, and you have to give up certain things. Control and stuff, which I’ve never been a control freak. I don’t have a big ego which gets in the way when you run into that. If you’re willing to let go, then what you get back is a lot of creative energy, and people have an incentive to be part of it, and feel like part of the band. That’s why we have such great spirits here, and we’re best of friends. We’re having a good time, and it’s a strong band. I just hope we get the exposure that we deserve.

HMA: I hope so, too, and it’s obvious how well you’re doing because every album is full of absolutely solid material. You’re always banging out great albums in my humble opinion.

HMA: If you meet someone who’s going through the darkest time of their life right now, what would be the one piece of advice you would give them to help them through?

Michael Monroe: Yes it is. Don’t give up and keep it up. Keep going, because it’s just a temporary situation. There will always be better days, and even though it might seem like things are worse than yesterday, concentrate on the positive. Look at the bright side. It may be cliché but still, look at the bright side. Concentrate on the positive and positive things start happening.

HMA: If tonight was your last show ever, what would be the song you would want to go out with?

Michael Monroe: Dead, Jail, Or Rock And Roll. It’s always the last song in our set and I would play that. I can tell you this. Every show I do and every day I live, I live like it could be my last. I give everything. Living like every day could be your last doesn’t mean I have to go self-destruct and all that stuff. People will say, “Yeah, I live like every day could be the last.” That doesn’t mean you better start getting all messed up and doing drugs and whatever. To me it’s about being happy as I am.