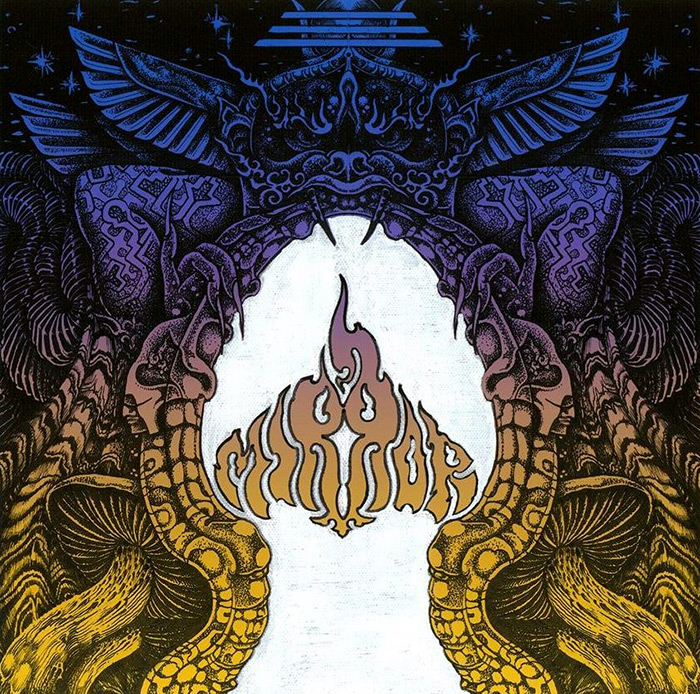 The Devil in the Mirror

Mirror is the musical brainchild of bassist and die-hard metal master Tas Danazoglou (Electric Wizard, Satan’s Wrath). A chance meeting with London-based producer and drummer Jaime Gomez Arellano led to the two embarking on a shared musical vision that encompasses classic hard-rock, proto-metal sound with tasteful songwriting and musicianship. Guitarist Stamos K. was next to join. He was followed by the seasoned performer, Jimmy Mavromatis who, with his operatic tenor vocals, rounded out the growing roster. The final addition to the lineup was Los Angeles-based guitarist Matt Olivo whose infamy was earned as the co-founder of grindcore pioneers Repulsion.

The recording of Mirror’s, self-titled first, full-length release began in London at Orgone Studios (Ghost, Paradise Lost, Cathedral) in the fall of 2014 with a drummer, Jaime Gomez Arellano handling production duties. The recording boasts strong melodic ideas with classic, heavy riffs inspired by the sounds of Scorpions, UFO, Iron Maiden, Deep Purple and the like.

HMA: ‘Mirror’ is kind of a supergroup, featuring members from Repulsion, Electric Wizard, Death, Satan’s Wrath, etc. How did you get together?

Tas: The band started with me(tas) and Gomez our drummer and producer. Then we chose friends of us that we thought will fit the bill. Jimmy the singer is an old friend of mine and I was sure that he only could be the singer. Then Stamos joined and later Matt from Gomez”s suggestion. We’re just a group of friends really.

HMA: …and how did you end up with the name ‘Mirror’? Does it have any symbolism?

Tas: At the point, I was reading a story of Brian Lumley called The Mirror Of Nitocris and this influenced me to call the band Mirror. Also, mirrors are strange objects that possess mysterious and magical powers.

HMA: Your primary theme is occultism… do you all share the same interest? And who is the main lyricist?

Tas: I wrote all the music and lyrics so I’m the one to blame. I was fascinated with magic and witchcraft since I was a kid and this grew over the years. I have many old and rare books on the subject and to this day I’m attracted to these matters. I’m not sure but I think the rest of the members are also into it to some extent.

HMA: Can you tell me about the songwriting process?

Tas: I wrote all the songs on bass in the beginning and recorded them with a Tascam device. Then Stamos did a demo with guitars and drum machine on top so we send to the other guys. Then it went from there. It took me around a week to write the songs with lyrics and all.

HMA: Occultism is a broad topic, are there any specific branches that most influence your music and lyrics?

Tas: I was always inclined to the dark side of it to be honest. I love to read books on witchcraft, black magic and sorcery. I’m really into 70s horror films of similar subjects too. Lately, it’s fashionable for bands to declare that they are into the occult or witchcraft and so on I understand. To me though is just a fascination since a kid and I see it from an almost historical point of view.

HMA: Mirror’s music influences are unmistakable Iron Maiden, Deep Purple and especially early Scorpions. Definitely not a nostalgic tribute since the sounds feel fresh and relevant. What’s your take on this?

Tas: Well the bands mentioned are still the greatest and I don’t think its nostalgic. Heavy metal is a very specific style of music and maybe some newer bands don’t seem to understand it. Not anything with a distorted guitar is heavy metal.

HMA: The back cover illustration is by tattoo artist at London studio Into You Alex Binnie. How did you get Alex to design part of your record sleeve, was it originally a tattoo?

Tas: I worked with Alex for eight years in his shop into you and we are great friends. I asked him to do specifically the back cover and in my opinion, he did a great job. It looks old and from an era long gone. Exactly as we wanted it.