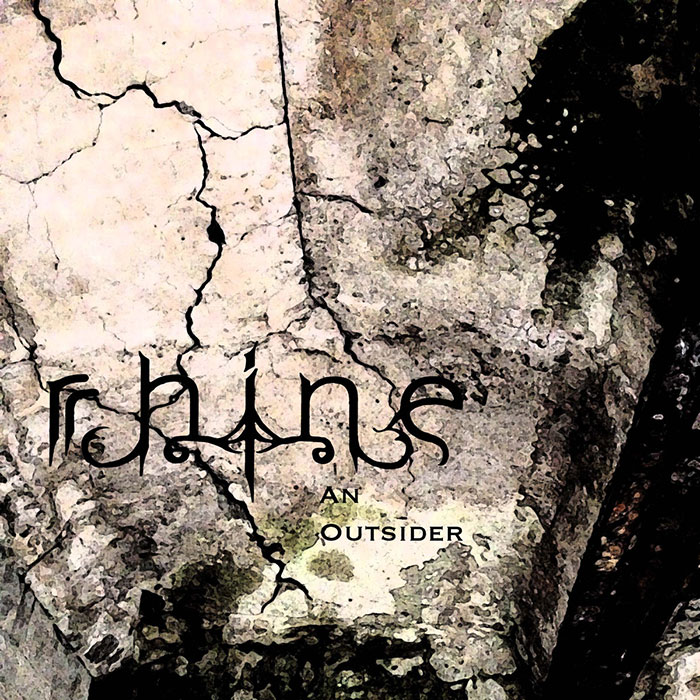 Rhine is a progressive metal band from Seattle that started as a solo project in 2011 by singer/guitarist Gabe Tachell. Now joined by Alex Smolin on guitar, Carlos Delgado on drums, and James Porter on bass.

HMA: Welcome to Heavy Music Artwork. What can you tell me about ‘An Outsider’?

Gabe Tacehell: Well, it’s a long weird progressive metal album that has a little something for everyone.

HMA: And who are “the outsiders”?

GT: We are. It refers to a few things though. For me, I’ve always kind of felt like an outsider in different aspects of my life. I moved around a lot as a kid and experienced a lot of culture shock, never really fit in anywhere I went, and it kind of became endemic in my life. So now I’m embracing that and taking all my mixed up influences and making something new.

HMA: How would you describe your music and sound?

GT: Progressive metal with death/black metal vocals and some clean singing. No song sounds like. Usually, it’s very emotionally driven, but also technical at times, math and epic. Also, there are a variety of non-metal styles thrown in when you least expect it, and often an underlying sense of humour.

GT: Usually about difficult life experiences, not always my own, and there are often political twists. Some of the topics written about on this album include sleep paralysis, nightmares, and social anxiety. I always end up writing some shit that’s just made up fantasy bs too, like the song P.R.E.Y. which is about hunting, fighting and making child sacrifices.

HMA: What are your main influences and creative inspirations?

GT: Of course I’m a big fan of other progressive metal artists, like Opeth, Enslaved, Devin Townsend, Dan Swano, Between The Buried And Me, etc. I’ve also had a lot of exposure to classical and contemporary modern music from growing up with musicians and going to college for music. I really love bands like Sleepytime Gorilla Museum who came from a more artistic mindset, experimented and made something very raw, sophisticated and visceral. I really love good pop music as well, it can be relaxing to just listen to something simple and catchy. I can’t be constantly listening to music that is intellectually challenging, it’s too much work, I like both extremes of simplicity and complexity. So I find myself trying to make sophisticated music but mix in catchy elements that you don’t have to work really hard to latch on to. It’s tension and relief, you hear something that is hard to follow or makes you feel uneasy, then it goes into something catchy that’s easy to digest.

HMA: Lastly, what are your plans moving the band forward?

GT: We’re working on some tour dates this summer, just on the west coast. Also getting some killer new tracks to demo’d to send out to labels and see if anyone’s interested in putting out our 3rd record.