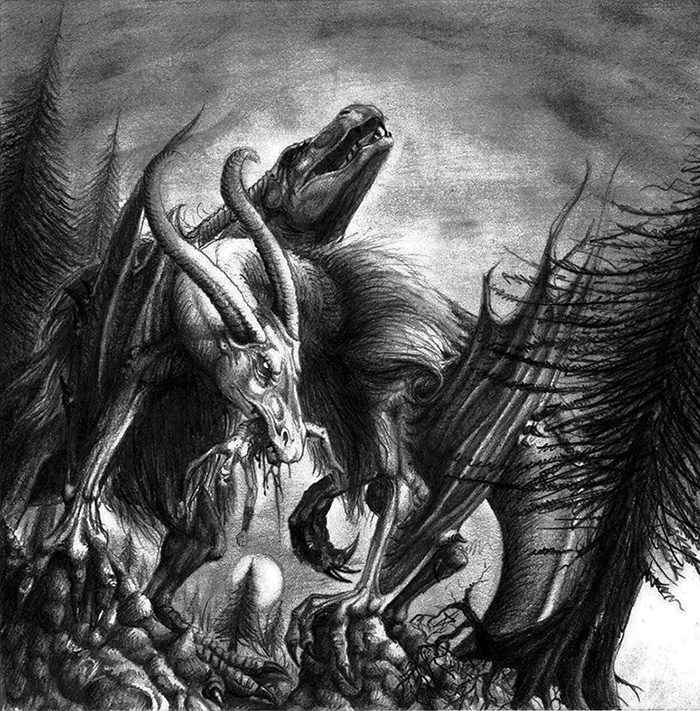 Drawing visions I am obsessed with

I have been drawing since I was a child. I grew up playing video games so I began to draw characters and landscapes with atmospheres I was sensitive to. My student work was too weak to access art schools, and quite disconnected from reality. In 2011, I did a computer graphics course, which helped me a lot to work on my own stuff as well as logos and artworks. I am a self-taught guy in a way.

I don’t think I have a huge technique. I draw outlines to help me visualize and then work on the shadows. I often use the good old finger blurring method if necessary, and a rubber to get some lighting effects inside shadows. Sometimes I use a darker pen to get a better contrast on darker areas. I never use any color, but I do it with a computer if needed. I draw with very basic stuff, generally greasy pencils, a rubber and some quality sharpener. Sometimes I use a simple ball-point pen. Most of the time, I draw on A4 printer sheets of paper and sometimes drawing paper.

I guess one could say drawing was more a necessity than an amusement for me. That’s probably why I only use simple stuff instead of investing into artist gear and so on. Now that some bands are asking me for artworks, things have changed. I feel now I have the need to get better and cope with the challenges, but I am not even sure I really like it. With time, drawing has become more of a burden than a pleasure. It drains a lot of my mental energy, but I only feel a precarious satisfaction in the end when the job is done.

I do not use any symbols unless I am told to. My drawings are not supposed to show any kind of ideology. They are dark most of the time because I am not a joyful person and I never been  interested in any religion nor the occult. The use these kind of symbols seems too impersonal to me and and they are overexploited in metal. Music often feeds my imagination. I am also inspired by some places I visited or wandered in, like forests, mountains, castles, etc. There are many drawers I respect a lot, especially Guram Dolenjashvili.

The work that best represents my style is the one I did for the first album of my own band, Wyrms. It shows two wyrms in a rocky landscape, feasting on a man. I would say this is the most technically refined work I have done to this day.