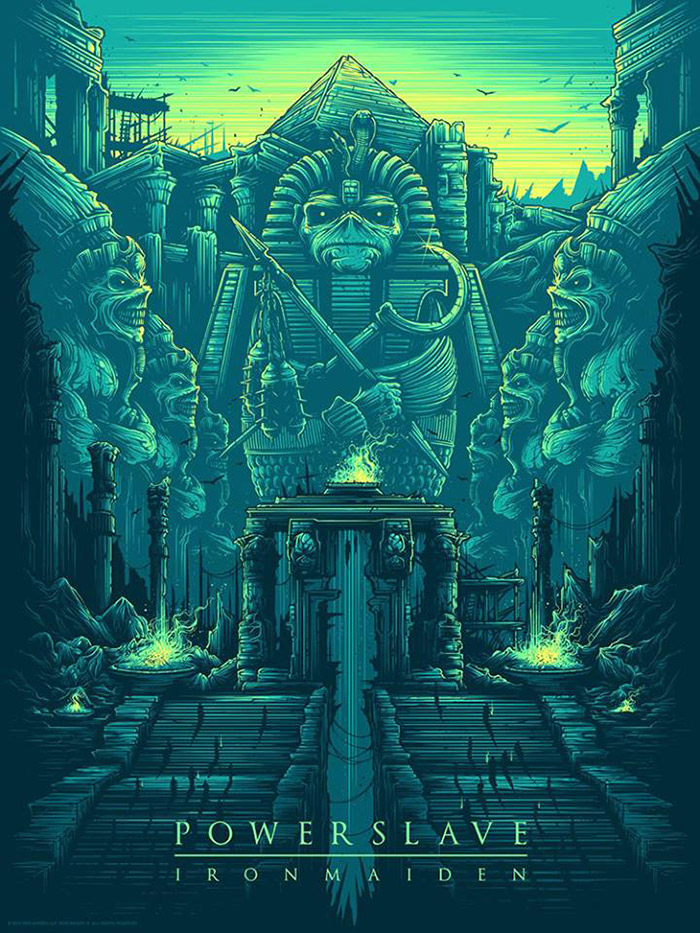 “The epic cover of Powerslave is an image that was burned in my brain from an early age. Released in 1984, it was something I always associated with real metal and was consistently on the shelves of CDs I would look through as a kid. It was the clear winner for me, not only does it raise Eddie up to his rightful God status, but it allowed me to play with some incredible imagery and create a piece that hopefully does him and the band justice.” – Dan Mumford

“My exposure to rock/metal really was spearheaded by Iron Maiden. The visuals alone drew me in as a kid, obviously! I chose ‘2 Minutes To Midnight’ for my piece because I have such a vivid recollection of expecting Nuclear War at any moment in the 80’s. Soviet Russia and Nuclear War were the epitome of fear back then. I love that the song seems to be ahead of the curve on a bit with its romanticised perspective of the world at that time” – Zombie Yeti

“Heavy music is a huge part of my life, and Iron Maiden is the band that has inspired me for decades so I could not imagine a better gig to work on! Based on the title of this new track I decided to create a flat colour image like the ones on the sides of old arcade machines. Of course it had to be bold, powerful, and it had to jump straight out at the viewer – so Eddie, once more, is coming to get you!” – Santi Casas

“The first thing I remember drawing as a kid was Mickey Mouse, the second thing I remember trying to draw was Eddie from Iron Maiden’s album covers. I was into Run DMC and Beastie Boys at the time and didn’t appreciate metal like I do today. Their Killers album cover freaked me out! It wasn’t just the crazy eyes but the atmosphere of the whole cover: windows into everyday people, safe at home, watching TV or darning socks or whatever… and outside was this monster on the prowl. Even today the oddness of the cover makes me shudder – those TV antennas as symbols, the person peeking out of the window… I came around to metal and discovered a slew of equally awesome Iron Maiden covers, but Killers is a winner for me.” – Godmachine