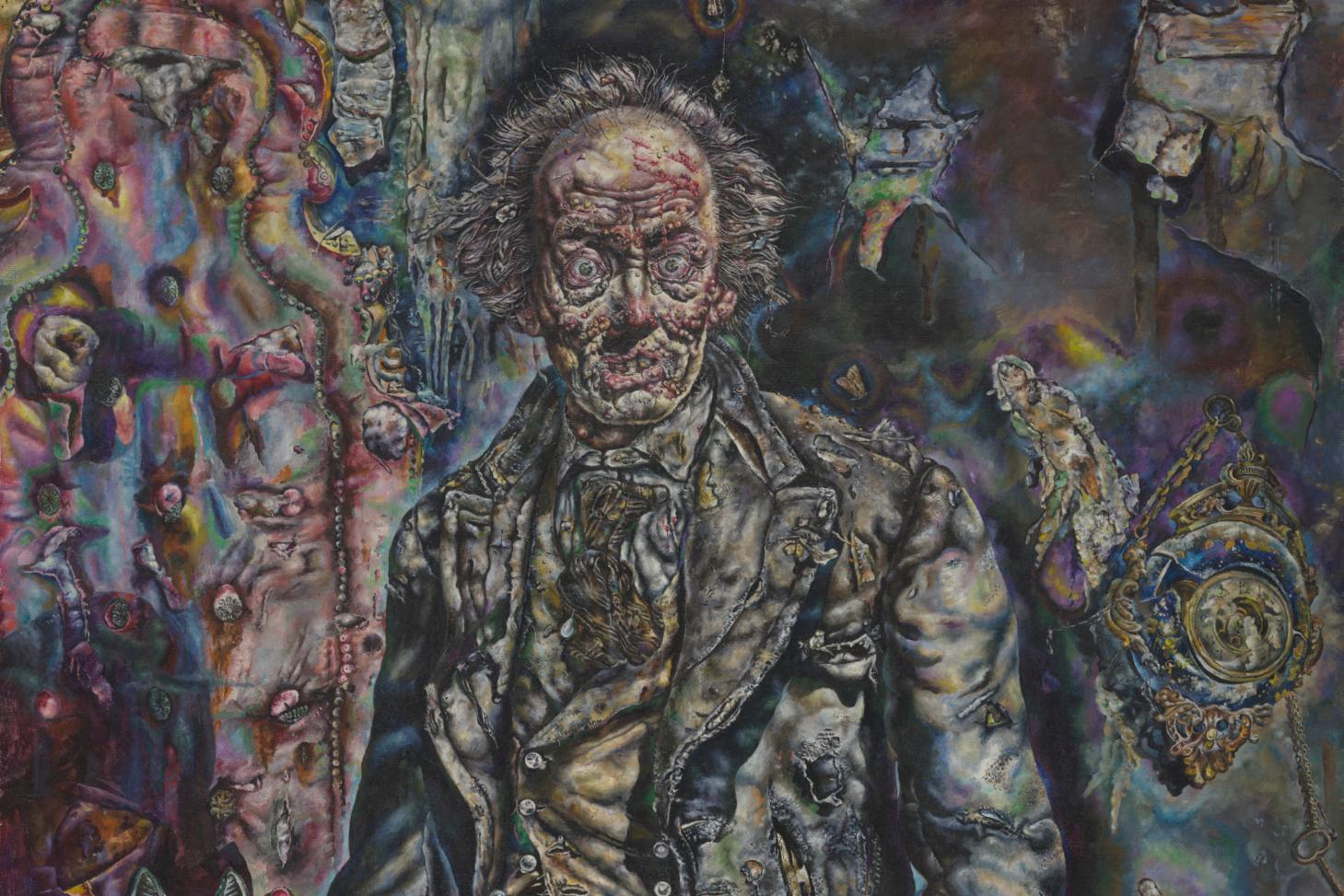 Among Albright’s typically dark, mysterious works are some of the most meticulously executed paintings ever made, often requiring years to complete. Lace curtains or splintered wood would be recreated using brushes of a single hair. The amount of effort that went into his paintings made him quite possessive of them. Even during the Great Depression he charged 30 to 60 times what comparable artists were charging, with the result that sales were infrequent. In order to survive he relied on the support of his father, and took odd carpentering jobs. An early painting of his, The Lineman won an award and made the cover of Electric Light and Power, a trade magazine. However his stooped and forlorn portrayal caused controversy among the readership, who did not consider such an image representative. The editors later distanced themselves from Albright’s

Albright focused on a few themes through most of his works, particularly death, life, the material and the spirit, and the effects of time. He painted very complex works, and their titles matched their complexity. He would not name a painting until it was complete, at which time he would come up with several possibilities, more poetic than descriptive, before deciding on one. Such an example is Poor Room – There is No Time, No End, No Today, No Yesterday, No Tomorrow, Only the Forever, and Forever and Forever Without End (The Window), the last two words actually describing the painting (it was as such the painting is generally referred). Another painting, And Man Created God in His Own Image, was called God Created Man in His Own Image when it toured the South. One of his most famous paintings, which took him some ten years to complete, was titled That Which I Should Have Done I Did Not Do (The Door), which won top prize at three major exhibitions in New York City, Chicago, and Philadelphia in 1941. The prize at the Metropolitan Museum of Art in New York earned him a $3,500 purchase award and a place in the permanent collection, but, not willing to part with the work for less than $125,000, Albright took the First medal instead, allowing him to keep the painting. Albright was elected to the National Academy of Design in 1942.

In 1943 he was commissioned to create the title painting for Albert Lewin’s film adaptation of Oscar Wilde’s The Picture of Dorian Gray. His realistic, but exaggerated, depictions of decay and corruption made him very well suited to undertake such a project. His brother was chosen to do the original uncorrupted painting of Gray, but the painting used on the film was from Henrique Medina. Ivan made the changes in the painting during the film. This original painting currently resides in the Art Institute of Chicago. Albright was a prolific artist throughout his life, working as a printer and engraver as well as a painter. He made his own paints and charcoal, and carved his own elaborate frames. He was a stickler for detail, creating elaborate setups for paintings before starting work. He was obsessive about lighting to the point that he painted his studio black, and wore black clothing to cut out potential glare.

Later in life Albright lived in Woodstock, Vermont. His last visit to his old home town of Warrenville, Illinois was in 1978. The city declared Ivan Albright Day, and honored Albright with a full day of festivities. Albright’s biographer, Michael Croydon, was on hand to present the newly-published richly-illustrated book called Ivan Albright. The library featured a large display of photographs from Albright’s years spent in Warrenville. He was elected a Fellow of the American Academy of Arts and Sciences in 1979. Despite much time spent traveling the world, he never stopped working. Albright made over twenty self-portraits in his last three years, even on his deathbed, drawing the final ones after a stroke. He died in 1983. On the 100th anniversary of Ivan Albright’s birth, February 20, 1997, the Art Institute of Chicago opened a major show of his work. Appears the Man, a photograph of Ivan Albright and his most famous work, The Picture of Dorian Gray, can be found in the Art Institute of Chicago. The Ivan Albright Collection of archival materials, held by the Ryerson & Burnham Libraries at the Art Institute of Chicago, includes photographs, scrapbooks, sketches, notebooks, a film, and other materials documenting his life and career.