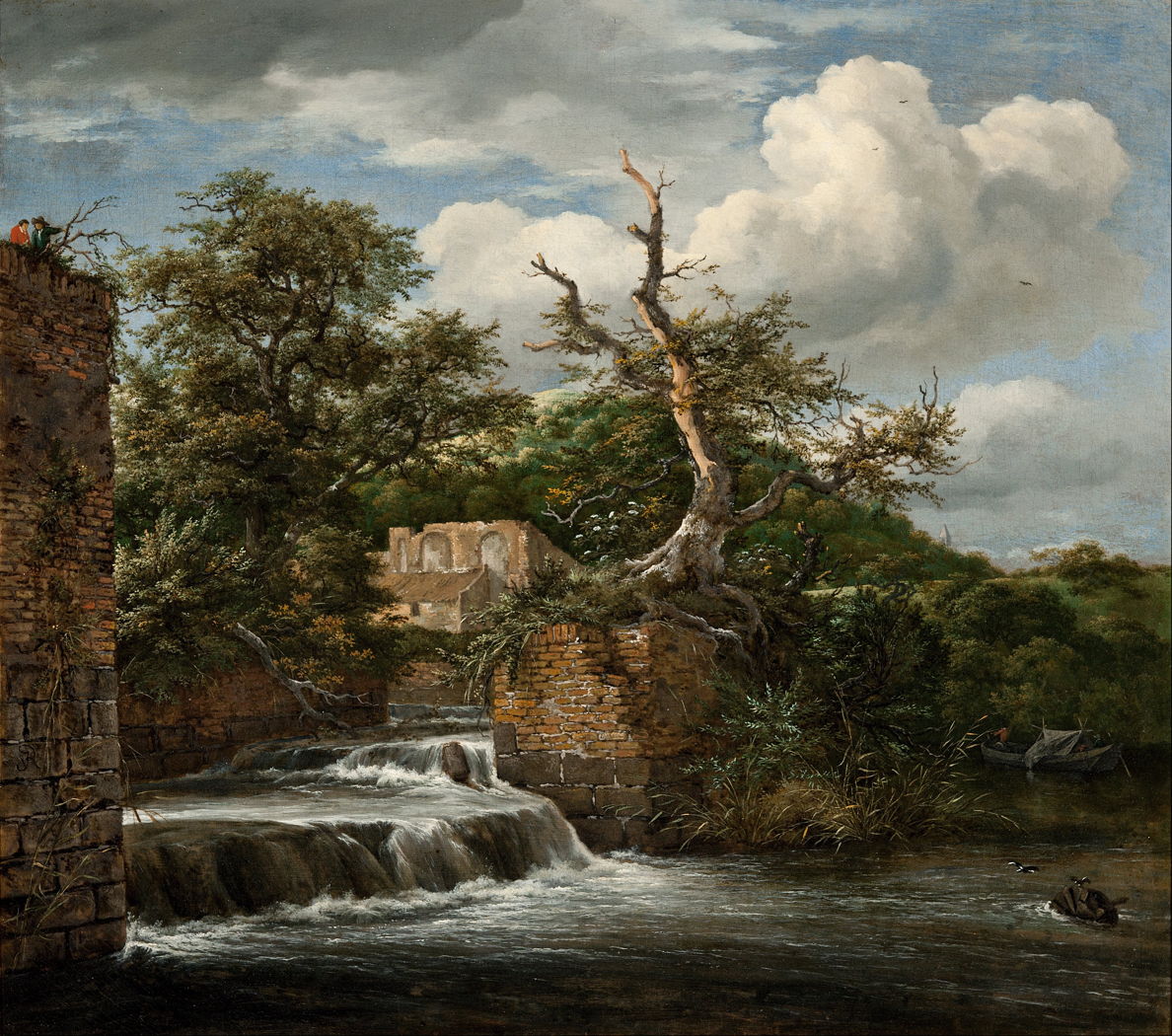 Jacob van Ruisdael is considered one of the great masters of landscape painting. Drawing inspiration from his surroundings and from the stories of incoming travelers, he created paintings that evoked emotion and thought. Van Ruisdael also used his imagination to create dramatic scenes and some of the most astounding landscape art works ever produced. The artist took landscape painting to a new level by creating nature as a metaphor of human psychology, specifically its darker aspects. Through the work of Jacob van Ruisdael landscape painting was no longer simply a record of how nature was perceived but rather it came to symbolize a deeper aspect that reflected the very soul of humankind. Derived from the Classical style, van Ruisdael paved the way for the Romantic style that came about in the late 18th century. His romantic mood is evident in his depiction of nature as he creates beautiful and tumultuous interpretations of the weather. Van Ruisdael recreated images, objects and structures amidst the vast horizons that created a sense of escapism in their dreamlike portrayal.

Dutch Baroque has become the most noted era in art. Artists were able to freely choose their subject matter and how they wanted to express it and this resulted in artists creating new art styles and techniques. Thus, the Dutch were prospering not only socially and economically but also in their art and culture. Deriving the Baroque style from Italy, the predominantly Protestant Dutch society would not allow the presentation or idolization of religious or biblical figures in paintings, instead favoring more conservative themes. This resulted in the Dutch focusing on more realistic painting and defining new concepts in portraiture, characterization, landscapes and still life. As the 17th century came to a close, more Protestant countries rejected Catholicism and a new art style was created that was more dramatic and revolutionary. This style was known as Rococo.

Jacob van Ruisdael’s greatest artistic skill was his ability to create new aspects in space and dimension when portraying various dramatic elements of nature. He came to perfect the art of landscape painting through his technical competency and innovation. Strongly influenced by his great uncle, Salomon van Ruysdael, under whom he later studied, van Ruisdael’s early offerings show an intense affiliation to nature and the solitary structure and objects against nature’s great vastness. Later on in his career, when in Amsterdam, Jacob van Ruisdael created works derived from his imagination, using the Dutch and Germanic landscapes as a foundation. He would devise all sorts of methods to create new visual aspects such as using new painting techniques for his distant horizons and impasto for three dimensional effects.

Impasto is a thick type of paste that creates astounding lighting affects and reflections. When applied thickly, it can show the intensity of the brush stroke which makes expression easier. During the 1650s van Ruisdael’s palette became brighter and he used lighter shades for the sun-highlighted solitary structures. He also began to use more blues to depict the sky. Trees and foliage also appear greener in his later works and the images are starker. Like his uncle, van Ruisdael painted with a keen focus on the effect of light and atmosphere which would ultimately change the natural components of the landscape. Painting his images below a cloudy sky would also alter the dynamic of the image and create new compositional techniques.

Jacob van Ruisdael’s first major influence was his uncle, Salomon van Ruysdael, his father’s brother. Salomon was an avid landscape painter who also studied at the Guild of St Luke in Haarlem. It’s believed that two of Salomon’s main influences were friends and fellow Dutch artists Esaias van de Velde and Jan van Goyen. Salomon van Ruysdael, van de Velde and van Goyen were all inspired by the early Dutch Baroque artist Cornelis Vroom who specialized in landscape painting. The young Jacob van Ruisdael was influenced by each of these Dutch artists and took their technique and style of landscape painting to the next level.

Second career
It could be argued that van Ruisdael’s life as a surgeon also served as inspiration in finding the precise images to depict the tumult of human life and the changes and emotions defining it.

Nature
Van Ruisdael must have spent considerable time in and around the Dutch countryside and north-west Germany and he was fascinated by the brutal and barren northern European landscapes.

Allart van Everdingen
Everdingen was a Dutch landscape artist who was passionate about dark landscapes of the north and would frequently travel to Norway in search of inspiration.

Everdingen’s landscapes are full of sweeping clouds, heavy rain and tumultuous ravines. He executes his work on a more intense level, portraying more powerful, overbearing and intense images using a darker palette than that of Ruisdael. Everdingen’s influence is particularly evident in van Ruisdael’s Waterfall with Castle Built on the Rock.