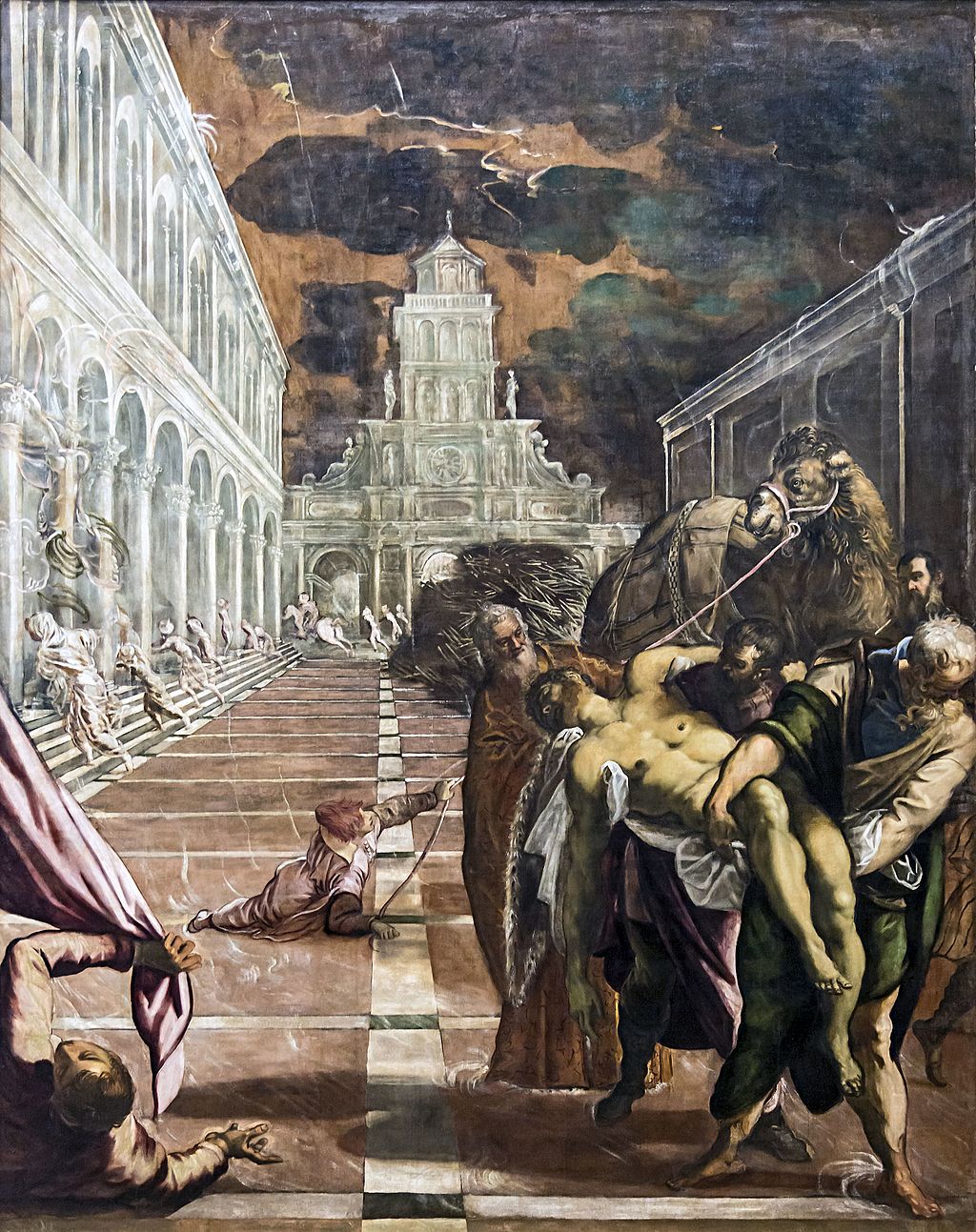 “Tintoretto stayed at home, but he felt in his own person a craving for something that Titian could not teach him. The Venice he was born in was not the Venice of Titian’s early youth, and his own adolescence fell in the period when Spain was rapidly making herself mistress of Italy. The haunting sense of powers almost irresistible gave a terrible fascination to Michelangelo’s works, which are swayed by that sense as by a demonic presence. Tintoretto felt this fascination because he was in sympathy with the spirit which took form in colossal torsos and limbs. To him these were not, as they were to Michelangelo’s enrolled followers, merely new patterns after which to model the nude.

“But beside this sense of overwhelming power and gigantic force, Tintoretto had to an even greater degree the feeling that whatever existed was for mankind and with reference to man. In his youth people were once more turning to religion, and in Venice poetry was making its way more than it had previously done, not only because Venice had become the refuge of men of letters, but also because of the diffusion of printed books. Tintoretto took to the new feeling for religion and poetry as to his birthright. Yet whether classic fable or Biblical episode were the subject of his art, Tintoretto coloured it with his feeling for the human life at the heart of the story. His sense of power did not express itself in colossal nudes so much as in the immense energy, in the glowing health of the figures he painted, and more still in his effects of light, which he rendered as if he had it in his hands to brighten or darken the heavens at will and subdue them to his own moods.

“He could not have accomplished this, we may be sure, if he had not had even greater skill than Titian in the treatment of light and shadow and of atmosphere. It was this which enabled him to give such living versions of Biblical stories and saintly legends. For, granting that an effect of reality were attainable in painting without an adequate treatment of light and atmosphere, even then the reality would look hideous, as it does in many modern painters who attempt to paint people of today in their everyday dress and among their usual surroundings. It is not ‘Realism’ which makes such pictures hideous, but the want of that toning down which the atmosphere gives to things in life, and of that harmonizing to which the light subjects all colours.

“It was a great mastery of light and shadow which enabled Tintoretto to put into his pictures all the poetry there was in his soul without once tempting us to think that he might have found better expression in words. The poetry which quickens most of his works in the Scuola di San Rocco is almost entirely a matter of light and colour. What is it but the light that changes the solitudes in which the Magdalen and St. Mary of Egypt are sitting, into dreamlands seen by poets in their moments of happiest inspiration? What but light and colour, the gloom and chill of evening, with the white-stoled figure standing resignedly before the judge, that give the ‘Christ before Pilate’ its sublime magic? What, again, but light, colour, and the star-procession of cherubs that imbue the realism of the ‘Annunciation’ with music which thrills us through and through?

“Religion and poetry did not exist for Tintoretto because the love and cultivation of the Muses was a duty prescribed by the Greeks and Romans, and because the love of God and the saints was prescribed by the Church; but rather, as was the case with the best people of his time, because both poetry and religion were useful to man. They helped him to forget what was mean and sordid in life, they braced him to his task, and consoled him for his disappointments. Religion answered to an everliving need of the human heart. The Bible was no longer a mere document wherewith to justify Christian dogma. It was rather a series of parables and symbols pointing at all times to the path that led to a finer and nobler life. Why then continue to picture Christ and the Apostles, the Patriarchs and Prophets, as persons living under Roman rule, wearing the Roman toga, and walking about in the landscape of a Roman bas-relief? Christ and the Apostles, the Patriarchs and Prophets, were the embodiment of living principles and of living ideals. Tintoretto felt this so vividly that he could not think of them otherwise than as people of his own kind, living under conditions easily intelligible to himself and to his fellow men. Indeed, the more intelligible and the more familiar the look and garb and surroundings of Biblical and saintly personages, the more would they drive home the principles and ideas they incarnated. So Tintoretto did not hesitate to turn every Biblical episode into a picture of what the scene would look like had it taken place under his own eyes, nor to tinge it with his own mood.

“His conception of the human form was, it is true, colossal, although the slender elegance that was then coming into fashion, as if in protest against physical force and organization, influenced him considerably in his construction of the female figure; but the effect which he must always have produced upon his contemporaries, which most of his works still produce, is one of astounding reality as well as of wide sweep and power. Thus, in the ‘Discovery of the Body of St. Mark’, in the Brera, and in the ‘Storm Rising while the Corpse is being Carried through the Streets of Alexandria’, in the Royal Palace at Venice, the figures, although colossal, are so energetic and so easy in movement, and the effects of perspective and of light and atmosphere are so on a level with the gigantic figures, that the eye at once adapts itself to the scale, and you feel as if you too partook of the strength and health of heroes.

“That feeling for reality which made the great painters look upon a picture as the representation of a cubic content of atmosphere enveloping all the objects depicted, made them also consider the fact that the given quantity of atmosphere is sure to contain other objects than those the artist wants for his purpose. He is free to leave them out, of course, but in so far as he does, so far is he from producing an effect of reality. The eye does not see everything, but all the eye would naturally see along with the principal objects must be painted,or the picture will not took true to life. This incorporation of small episodes running parallel with the subject rather than forming part of it, is one of the chief characteristics of modern as distinguished from ancient art.

“It is this which makes the Elizabethan drama so different from the Greek. It is this again which already separates the works of Duccio and Giotto from the plastic arts of Antiquity. Painting lends itself willingly to the consideration of minor episodes, and for that reason is almost as well fitted to be in touch with modern life as the novel itself. Such a treatment saves a picture from looking prepared and cold, just as light and atmosphere save it from rigidity and crudeness.

“No better illustration of this can be found among Italian masters than Tintoretto’s ‘Crucifixion’ in the Scuola di San Rocco. The scene is a vast one, and although Christ is on the Cross, life does not stop. To most of the people gathered there, what takes place is no more than a common execution. Many of them are attending to it as to a tedious duty. Others work away at some menial task more or less connected with the Crucifixion, as unconcerned as cobblers humming over their last. Most of the people in the huge canvas are represented, as no doubt they were in life, without much personal feeling about Christ. His own friends are painted with all their grief and despair, but the others are allowed to feel as they please. The painter does not try to give them the proper emotions. If one of the great modern novelists, if Tolstoy, for instance, were describing the Crucifixion, his account would read as if it were a description of Tintoretto’s picture. But Tintoretto’s fairness went even farther than letting all the spectators feel as they pleased about what he himself believed to be the greatest event that ever took place.

“Among this multitude he allowed the light of heaven to shine upon the wicked as well as upon the good, and the air to refresh them all equally. In other words, this enormous canvas is a great sea of air and light at the bottom of which the scene takes place. Without the atmosphere and the just distribution of light, it would look as lifeless and desolate, in spite of the crowd and animation, as if it were the bottom of a dried-up sea.

“While all these advances were being made, the art of portraiture had not stood still. Its popularity had only increased as the years went on. Titian was too busy with commissions for foreign princes to supply the great demand there was in Venice alone. Tintoretto painted portraits not only with much of the air of good breeding of Titian’s likenesses, but with even greater splendour, and with an astonishing rapidity of execution. The Venetian portrait, it will be remembered, was expected to be more than a likeness. It was expected to give pleasure to the eye, and to stimulate the emotions. Tintoretto was ready to give ample satisfaction to all such expectations. His portraits, although they are not so individualized as Lotto’s, nor such close studies of character as Titian’s, always render the man at his best, in glowing health, full of life and determination. They give us the sensuous pleasure we get from jewels, and at the same time they make us look back with amazement to a State where the human plant was in such vigour as to produce old men of the kind represented in most of Tintoretto’s portraits.”

From: Bernard Berenson, “Italian Painters of the Renaissance”