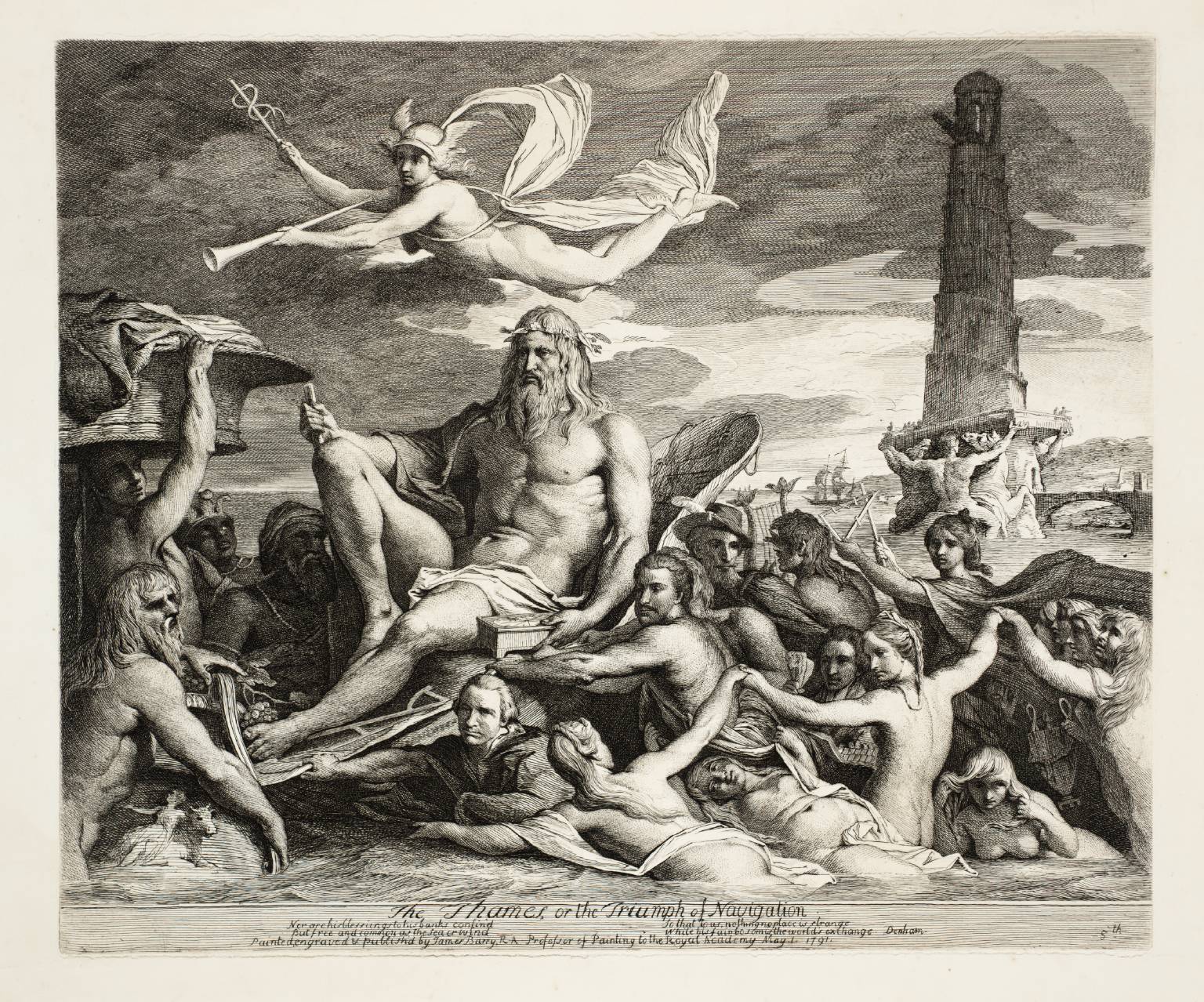 Barry was one of the most colourful and turbulent characters of his time. He was born in Cork in 1741, the son of a builder and coastal trader. Having conceived the ambition to become a painter, he moved to Dublin in about 1760, where he met and impressed the statesman and author Edmund Burke. Burke furnished him with letters of introduction to various influential figures in London, where the young artist subsequently spent four years working on drawings and illustrations for James “Athenian” Stewart, one of the principal instigators of the eighteenth-century revival of interest in the art and archaeology of ancient Greece. Barry, who was himself destined to become one of the pioneers of so-called “Neoclassical” painting, yearned to travel to Italy to experience the masterpieces of antique art and the Renaissance at first hand. In 1765 his wish was granted when his patron Edmund Burke helped to fund him on an extended trip abroad. Barry spent ten months in Paris and four years in Rome, writing enthusiastically back to a friend in Ireland that “really and indeed I never before experienced anything like that ardour, and I know not how to call it, that state of mind one gets on studying the antique – a fairy land it is…”

On his return to London in 1770, Barry determined to follow in the footsteps of the great masters of the past. Like the revered painters of antiquity, Apelles and Timanthes, and like the Renaissance masters, Michelangelo and Raphael, he was to specialise in the genre of “history painting”, depicting scenes drawn from the Bible or mythology showing man at his most heroic and impassioned. The problem which confronted him, as he lamented in his many published tirades and polemics on the decadence of modern taste, was that British patrons were simply uninterested in commissioning or purchasing the type of pictures that he painted. Many of his ambitious works, such as Philoctetes on the Isle of Lemnos or The Temptation of Adam, were exhibited at the Royal Academy’s annual exhibition in London. But few found a purchaser. Barry became increasingly incensed by what he regarded as the narrow preoccupation of the British gentry and aristocracy with portraiture – mere “facepainting”, as he described it.

As he grew older, Barry also became increasingly paranoid. Appointed Professor of Painting at the Royal Academy, he interspersed his lectures on subjects such as perspective or colour with ad hominem attacks on the President of that institution, Sir Joshua Reynolds, whom he accused of hypocritically paying lip service to the supremacy of history painting while pursuing a lucrative practise as a portrait painter. Reynolds, who relied on an ear trumpet in his later years, affected not to hear Barry’s outbursts, but the last straw came when, shortly after having his house burgled of £300, Barry publicly blamed a cabal of Royal Academicians for the theft. In 1799 he was expelled and lived the short remainder of his life in abject poverty. He told the poet Robert Southey that he did not go out at night for fear that “the Academicians would waylay him and murder him”.

The creative high point of Barry’s career had come in 1777, when he persuaded the Royal Society of Arts to allow him to decorate the Great Room of their building at the Adelphi with six large canvases on the vast theme of The Progress of Human Culture. He completed those pictures, which still exist in situ, in about seven years, working for expenses alone and living – according to legend – on porridge and black tea. The self-portrait shown here consciously harks back to Barry’s magnum opus, even to the extent of showing him in middle age, rather than as a sextuagenarian, which  he was when he painted it. The picture is actually derived from a vignette in the lower left hand corner of one of the Society of Arts paintings, Crowning the Victors at Olympia, in which Barry had included his own likeness in the persona of the ancient Greek painter Timanthes. Here too he is Timanthes, identified as such by the subject of the painting which he holds at an oblique angle. This depicts a Cyclops surrounded by marvelling satyrs, a subject with which Timanthes was famously associated. A darker note is struck by the inclusion, behind, of a massive stone foot crushing a hissing snake. The foot is that of Hercules, whose crushing of the serpent, according to the Roman author Horace, symbolised the inevitable triumph of Virtue over Envy.

Perhaps James Barry was not entirely confident of his own ultimate victory over the conspiracy and slander that he had come to see everywhere. The stone snake bares its fangs, seeming almost to whisper tauntingly into his ear. The artist’s face is gaunt and shadowed by anxiety. He remains true to his high-minded sense of vocation, but he also  sees it as a curse.