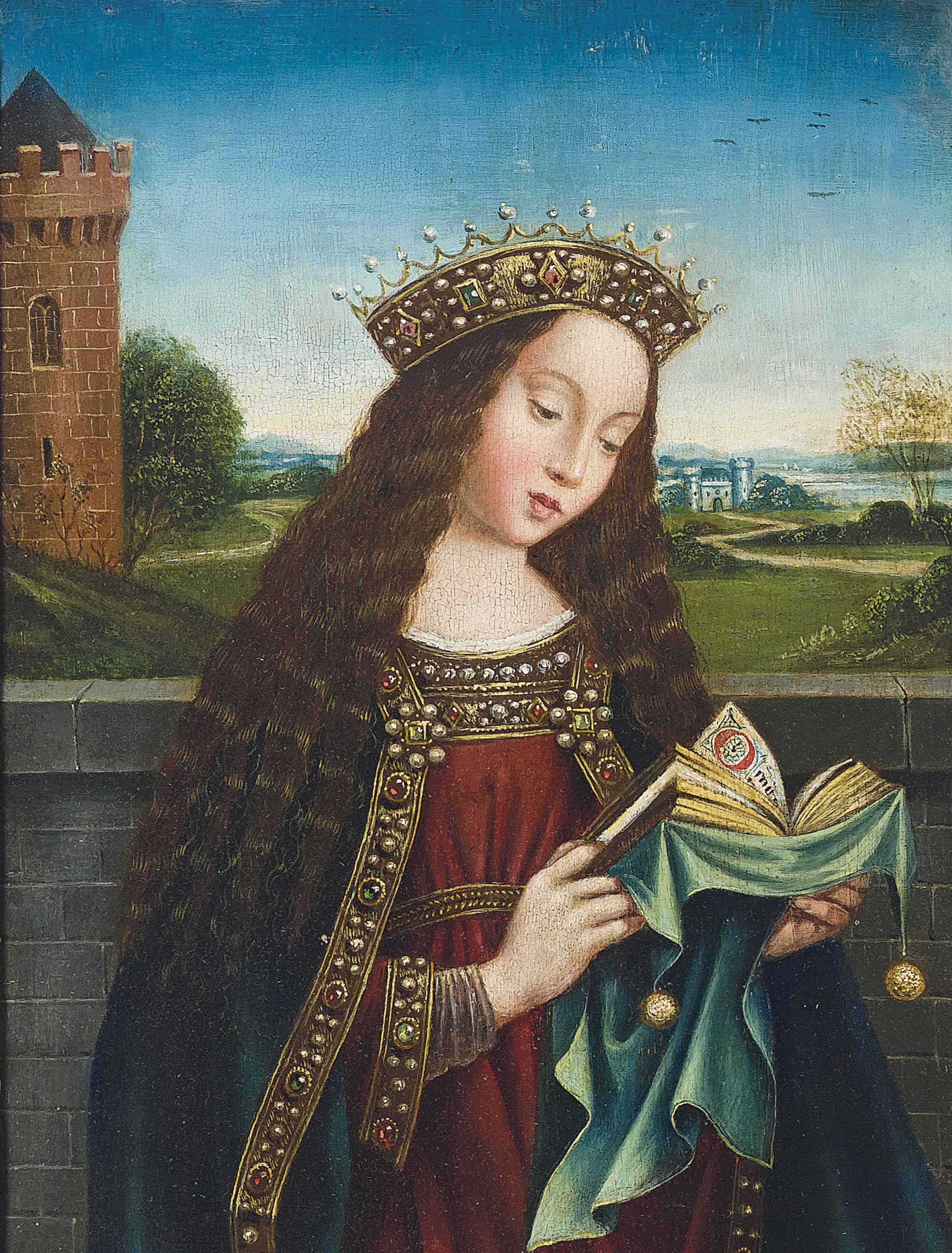 “Few people have been so eclipsed by their younger brother as Hubert was by Jan van Eyck. Today, Hubert is the merest phantom; he is that part of the Ghent altarpiece of The Adoration of the Lamb which is not by Jan – the curl of paper left by art historians when they have finished cutting out Jan van Eyck’s silhouette. His name, spelt variously as Ubert, Lubert and Hubert, appears briefly four times in the city archives on the Ghent altarpiece: “The painter Hubert van Eyck, than whom no greater has been found … and Jan, his brother, second in art. “Posterity has reversed even this judgment, and apart from the five documents, the stylistic evidence of the altarpiece, and the probability that The Three Marys at the Sepulcher in the Van Beuningen Collection may, on the grounds of what Panofsky called its “archaically overemphatic” linear perspective, be attributed to him, we know next to nothing of Hubert van Eyck, his life, his tastes, his peregrinations and jobs.

“Jan, of course, is a different matter. He was born somewhere around 1390 in the village of Maaseyck near Maastricht. Between 1422 and 1424, he was employed as a painter by John of Bavaria, Bishop of Liège; the next year, 1425, his famous relationship with Philip the Good, Duke of Burgundy, began. As court artist and equerry, he moved to Philip’s court at Lille. Few such cases of mutual serendipity adorn the history of Renaissance patronage: instead of treating his artist as something between a jongleur and an artisan, as the Medici in their off moments were apt to do, Philip was moved to declare that he “would never find a man so much to his taste, or such a paragon of science and art.” For eleven years, Jan van Eyck worked in an atmosphere of gracefully reciprocated admiration. He worked, not only for Philip, but for wealthy Italians resident in the Netherlands, such as Giovanni Arnolfini; his fame spread rapidly to Italy, whose humanists called him the “onore della pittura” and “il più grande pittore del nostro tempo”; Vasari wrongly credited him with the invention of oil painting. His intimacy with Philip the Good is strikingly indicated by the diplomatic missions (whose object, insofar as it can be discovered, was to negotiate marriages for the Duke) that Jan van Eyck undertook on his behalf: to Spain in 1427, to Portugal and England in 1428, and another, perhaps to Prague, in 1436. There was one thing, apart from Jan’s social position and professional contacts, which this extensive travel must have benefited: his prodigious visual memory. Jan van Eyck was almost unique among northern – or, for that matter, Italian – artists of the early quattrocento for his virtuosity as a recorder of historical style. When he paints a Romanesque capital (as in The Madonna of Chancellor Rolin) he gets it right: it is not a Gothicization of Romanesque. The stained glass window and niello pavement inlays in the Washington Annunciation exactly preserve what must have struck him as their primitive crudeness. It is typical of Van Eyck that this should have been so. No painter has ever been more preoccupied with artifacts with the exact way a square cut ruby is set in its flange to the rim of a crown or pearls are sewn to the hem of a robe, with the joints in an arch, the dull sheen of pewter or the luster of polished silver, the pin in an iron door hinge, the binding of a missal or the angular wooden soles of a pair of discarded chopines. In a lesser artist, this preoccupation might become fetishistic. In Jan van Eyck, it does not. Each of the refined and sumptuous objects with which his world was populated is both concrete and self transcending; or so we instinctively feel. Why?

“We may look for the answer in the hypothesis that Jan van Eyck pushed the problem of representation in art further than any artist had done before, or has since. Put baldly, this problem is: how much exact information can I load into a painting before suggestion takes over from fact? Total reality is unpaintable, because it is infinite. One can make approximations in paint which produce this or that illusion, but below a certain scale the approximations turn into shorthand microscopic reality cannot be rendered with a pasty, sloppy, granular substance like powdered minerals mixed in oil. William Blake’s “eternity in a grain of sand” was no visionary fancy, but a sober fact about matter.

“I have before me a peach on a plate. For a Cézanne, a Bonnard or a Velasquez, the reality of this peach is its volume, and in a generalized way, its bloom and color: a yellow globular object flushed with crimson patches, matte in surface, not shiny like an apple, its apparent texture (guessed from memories of other peaches) firm but tending to pulpiness. The illusions and sensations produced by a blob and half a dozen licks of paint, from the hand of such masters, will suffice to give so much information to the man who looks at that still life. But the peach is not exhausted, as an object of scrutiny, by these properties. For instance, its “bloom” is caused by a dense coating of short, fine hairs of vegetable fiber, growing from the pigmented skin, which diffuse reflected light. Seen under a glass, each of these fibers becomes a detailed form; under the microscope it may disclose unimaginable complexities of structure. And so one could go on. There is no limit to the describable properties of that fruit, or anything else. But where? At what point does he choose to nip this stupendous ramification of objecthood?

“We can see only a limited amount with the naked eye. Worse, we are apt to scan inattentively. Most representational painters, in trying to engage the attention, force one to complete the reading of clues which they leave unfinished: they halt their process of literal description somewhere short of the limit of information which an object normally renders up. “Two feet from the canvas, the glint on Rembrandt’s potato nose becomes a blob of white paint and the puckers in Titian’s sleeve turn into flat slaps of umber on a blue ground. We turn these marks back into velvet and sweaty skin by making the right guesses. The painters force us to.

“Jan van Eyck’s extraordinary achievement rests on the fact that he did the opposite. In his paintings, he extended detailed information about things far past the ordinary limits of scrutiny; his eye acted “both as a telescope and as a microscope”, and it left us with too much, not the suggestive too little of other realist art. Who, allowed to look into the room where Arnolfini and his bride hold hands in their private sacrament, would even notice what Van Eyck saw, or bring to it the obsessed and simultaneous focus he imposed on every object, large or tiny, far or near – the grain in those fractionally uneven floorboards, the differences of texture and springiness between the lapdog’s hairs and the fur of Arnolfini’s robe, the limp silk tassels of the beads hanging on the wall and the stiff bristles of the twig broom – which repeats their shape on the other side of the mirror? Only with great difficulty – one might almost say, only by a strenuous act of the imagination – can you make the green and gold brocade behind the Ince Hall Madonna become paint at all. A fifteenth century writer praised Van Eyck for his landscapes, which seem to stretch “for fifty miles.” The point is that such a way of presenting the world as a visual whole has no more to do with the way we see it than, say, Leonardo’s quick frozen notations of eddies in a mill race. Distance blues out the colors of objects, alters their tones and fuzzes their contours. We do not perceive everything within a given field with equal and perfect clarity; we scan and select. Jan van Eyck’s realism is not a metaphor of natural, or human vision. He painted the world as if everything in it were both knowable and perfectly known; his aim (to paraphrase Panofsky again) was not representation, but reconstruction. His art is a harmony parallel to nature: “Myself will I remake” and the world, too. Thus, Van Eyck’s realism was creative in an almost hubristic way, for its object was to suggest God’s perceptions in creating the universe: to see things from the standpoint of absolute knowledge which is uniquely God’s possession.

“Thus each object, each face and body in Jan van Eyck’s work is spiritualized by its almost total detail: his scrutiny goes beyond the concrete and waits for our symbolic imagination to catch up with it. The objects themselves are charged with symbolism; Jan van Eyck’s attitude to nature was medieval in that he seems to have regarded each created thing as a symbol of the workings of God’s mind, and the universe as an immense structure of metaphors. The casual eye is apt to read the Arnolfini betrothal portrait as a piece of genre, which looks forward to Vermeer and the Dutch intimists. But the probability is that Van Eyck designed it as a web of disguised symbols, intending to make a familiar com parison between the sacrament of marriage and the ideal relationship of the Virgin Mary as bride of God. The mirror on the wall, which is explicitly turned into a religious object by the ten scenes of Christ’s passion set in its frame, is a symbol of candor and purity; the little dog, an image of marital faithfulness – and so on. Spiritual states are externalized in objects. Even the fantastic splendors of marble, gold, glass and brocade in The Madonna of Chancellor Rolin are allegorized. The picture is one of the most aggressively confident celebrations of the belief that riches are a proof of virtue that has ever been painted; Chancellor Rolin has the wealth and contacts to arrange a private audience with God and His mother, and the angel holds the crown over Mary’s head with the faint, obsequious smile of a salesman at Cartier’s. Yet this image is, quite obviously, a variation on a more ancient one, that of the Virgin in her hortus conclusus, surrounded by attributes of purity and grace (the lily, the aromatic shrubs, the peacocks), remote from the mundane life of the city below the loggia.

“By such means of vision and symbolism, Jan van Eyck temporarily did away with the division between secular and religious works of art. All nature is sacramentalized by the sheer intensity of his gaze. To the realist’s modest claim that “This is the way it was,” Jan van Eyck adds “is now, and ever shall be, world without, end; Amen.”

From: Robert Hughes, introduction to “The Complete Paintings of the Van Eycks”