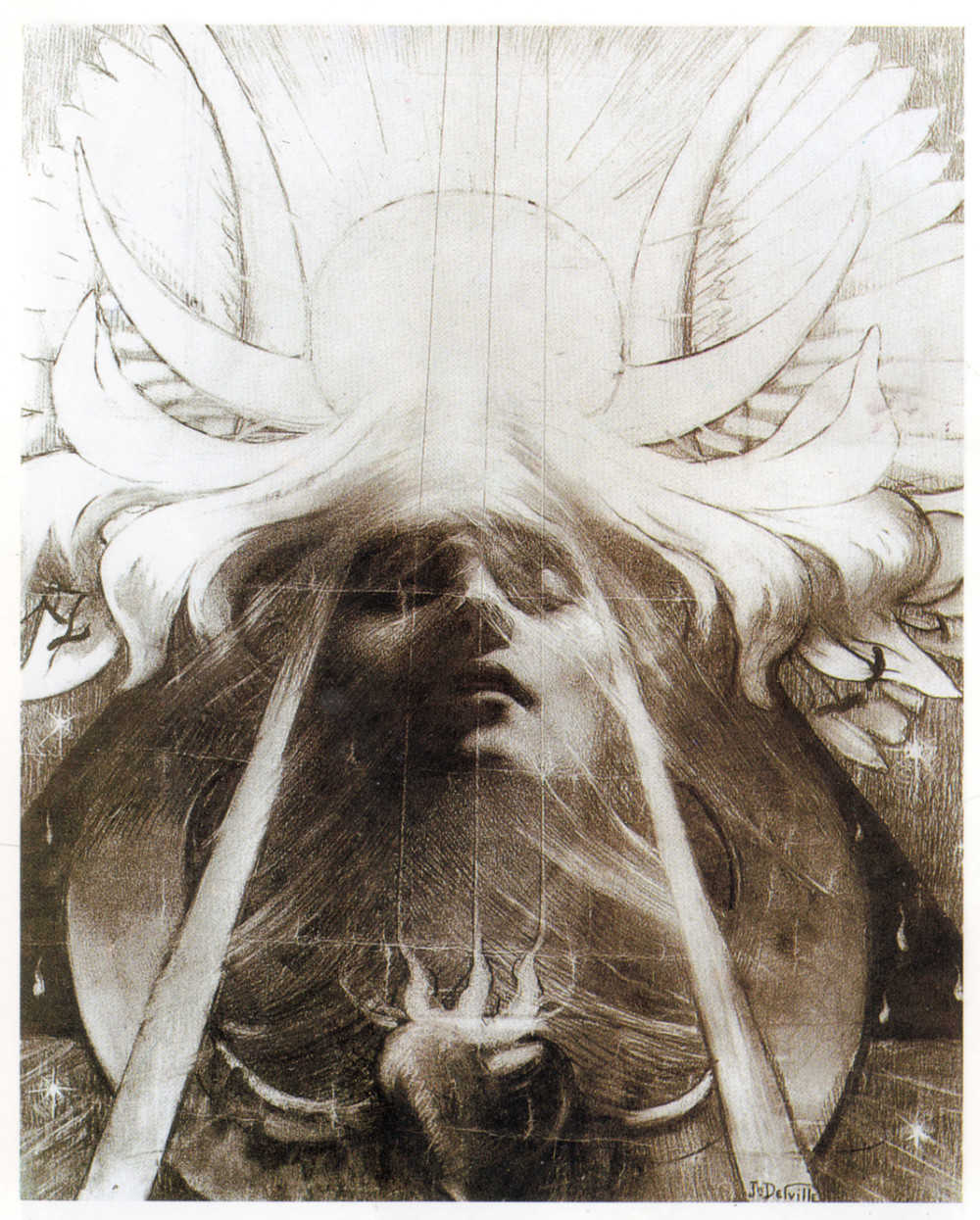 Jean Delville (19 January 1867, Leuven – 1953) was a Belgian symbolist painter, writer, and occultist. In 1896, he founded the Salon d’Art Idealiste, which is considered the Belgian equivalent to the Parisian Rose & Cross Salon and the Pre-Raphaelite movement in London.

During the last decades of the 19th century, many people in the West reacted to the materialism and hypocrisy of the period by developing an interest in esoteric, occult and spiritual subjects. The enthusiasm for these ideas reached its peak during the 1890s, the decade when the Belgian painter and writer Jean Delville was at the height of his powers. Delville was born in the Belgian town of Louvain in 1867. He lived most of his life in Brussels, but also spent some years in Paris, Rome, Glasgow and London. He began his training at the Académie Royale des Beaux-Arts when he was twelve, continuing there until 1889, and winning a number of top prizes. He began exhibiting professionally at the age of twenty, and later taught at the Academies of Fine Arts in Glasgow and Brussels. In addition to painting, Delville also expressed his ideas in numerous written texts.

Delville became committed to spiritual and esoteric subjects during his early twenties. In 1887 or 1888 he spent a period in Paris, where he met Sâr Joséphin Péladan, an eccentric mystic and occultist, who defined himself as a modern Rosicrucian, descended from the Persian Magi. Delville was struck by a number of Péladan’s ideas, among them his vision of the ideal artist as a spontaneously developed initiate, whose mission was to send light, spirituality and mysticism into the world. He exhibited paintings in Péladan’s Salons of the Rose + Croix between 1892 and 1895.

In 1895 Delville published his Dialogue entre nous, a text in which he outlined his views on occultism and esoteric philosophy. Brendan Cole discusses this text in his D.Phil. thesis on Delville (Christ Church, Oxford, 2000), pointing out that, though the Dialogue reflects the ideas of a number of occultists, it also reveals a new interest in Theosophy. In the mid or late 1890s, Delville joined the Theosophical Society. In 1896, he founded the Salon d’Art Idealiste, which is considered the Belgian equivalent to the Parisian Rose & Cross Salon and the Pre-Raphaelite movement in London. The Salon disbanded in 1898. In 1910 he became the secretary of the Theosophical movement in Belgium. In the same year he added a tower to his house in Forest, a suburb of Brussels. Following the ideas of Jiddu Krishnamurti, Delville painted the meditation room at the top, including the floorboards, entirely in blue. The Theosophical Emblem was placed at the summit of the ceiling. But though photographs and drawings still exist, the house, regrettably, no longer stands.